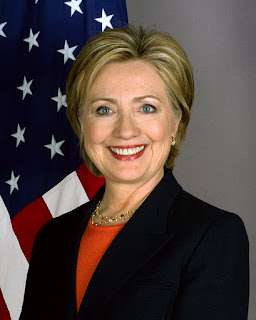 Although I am not an apologist for any politician, I feel compelled to respond to the way Hillary Clinton is being treated by the media and by Donald Trump and his supporters.  Enough is enough! Isn't this 2016?  Shouldn't a woman be able to run for the office of President of the United States without being called "shrill" and "unlikeable."  Name me one male politician who has been called "shrill" and "unlikeable."  Has anyone discussed Trump's likabilty?  Why should the election of the President of the United States be treated as a popularity contest anyway?

Words like "shrill" are part of a code, a cover for anti-woman sentiment, just as President Barack Obama's detractors use code words to hide their anti-black sentiments.  Obama's opponents don't dare mention his race, so they question whether he is a "real American"  Even though the president's birth certificate has been produced, they still refuse to believe he was born in Hawaii.  One of the most prominent of the "birthers," by the way, is one Donald J. Trump.

Hillary Clinton, of course, is not without her flaws and she is not above criticism.  She is, however, very experienced, very knowledgeable and very competent.  She is a supreme achiever.  In fact, Hillary is the only American woman who has been First Lady, a United States senator, U.S. Secretary of State and the Democratic Party's presidential nominee.  That's quite a resume, isn't it?  It may also be the reason she is so disliked.  Could it be that a successful and ambitious woman still unnerves a large number of Americans?  Is it true that in the 21st century many Americans still consider aggressiveness to be an unattractive and scary trait in a woman,  Evidently, the answer is yes.  Otherwise, the election would not even be close, considering how much more qualified the female candidate is.

As U.S. Secretary of State, Hillary was a participant in some of the Obama administration's most difficult and significant decisions.  Contrast her experience to that of Donald Trump's lack of experience.  Trump  has never even held public office (although that fact makes him attractive to his supporters).  Recently, Matt Lauer asked The Donald what he had experienced in his personal and professional life that had prepared him to make the decisions that a commander-in-chief must make.  Here is Trump's response:

Well, I've build a great company.  I've been all over the world.  I've dealt with foreign countries.  I've done very well, tremendously well dealing with China and dealing with so many other countries that are just ripping this country . . .

Donald Trump's reply was so unfocussed and rambling that Lauer was forced to repeat the question..  "But what have you done in your life," he inquired of Trump, "that prepares you to send our men and women into harm's way,"  This time Trump's response was that he had the good judgement to oppose the invasion of Iraq.

Many people have built great companies, travelled all over the world, dealt with China and other countries and opposed the invasion of Iraq.  Does that make them qualified to be President of the United States?  Trump's lack of experience and skill in foreign policy and diplomacy is worrisome.  He is not qualified to make life and death decisions.  If he should be elected president, he will be holding office the most powerful public office in the free world.  He will be stepping into that office as an inexperienced and ill-prepared neophyte.  Frankly, that's a frightening scenario.

Hillary Clinton, as we know, does not score well among voters in terms of trustworthiness.  She has been dogged by an email scandal, for which she has admitted her error and has accepted responsibility for her mistake.  I can't think of any politician who has endured the intense scrutiny that Hillary Clinton has endured through her years in public life.  As Barack Obama has stated, she has been under a microscope, for decades.

This week, we witnessed the spectacle of the media's over-the-top obsession over Hillary's health.  I understand that all-news stations such as CNN have to fill 24 hours, but really?  She had a bout of pneumonia (which she should have revealed sooner). She's not dying.  If Hillary were a man, would Trump be accusing her of not having the energy and stamina to carry out the duties of the highest office in the land?  President Dwight D. Eisenhower suffered a much-publicized heart attack in September of 1955.  Yet that didn't stop him from seeking a second term in office in the election 1956, which he won over the less popular Adlai Stevenson.  Can you imagine how today's media would have reacted if Hillary had had a heart attack?

Meanwhile, Donald Trump continues to make outlandish remarks and disgusting comments.  It is not Hillary who wants to build a wall between Mexico and the United States.  It' wasn't Hillary, but Trump, who stated that Mexicans are "bringing crime" and that "they're rapists."  Trump also added that he assumes that some are good people.  Well, isn't that generous of him.  At least he didn't say, 'Some of my best friends are Mexicans."

It's not Hillary who's campaigning for the presidency as if she were hosting a reality show.  She hasn't called her political opponents names such as "Little Marco," "Lying Ted" and "Crooked Hillary." Given his own record, Donald Trump has some nerve calling anyone "crooked."  It's not Hillary, but Trump, who has allegedly refused to pay hundreds of workers.  Steve Reilly of USA Today, did a thorough probe of Trump's business practices and discovered a large number of people who worked for Trump in the past and were not paid much or nothing at all.  Reilly wrote the following about Trump:

The number of companies and others alleging he hasn’t paid suggests that either his companies have a poor track record hiring workers and assessing contractors or that Trump businesses renege on contracts, refuse to pay, or consistently attempt to change payment terms after work is complete as is alleged in dozens of court cases.

Oh, and don't forget the Trump University scam.  In a June 2, 2016 article in The New Yorker, John Cassidy asks the following question:  "Will one of the world's leading democracies elect as its President a businessman who founded and operated a for-profit learning annex that some of its own employees regard a a giant ripoff, and that the highest legal officer in New York State has described as a classic bait-and-switch scheme?"

Then there is the matter of the Trump Foundation, a private charitable organization that Trump started in 1987 from the profits of his bestselling book, The Art of the Deal.  New York's attorney general, Ed Schneiderman said he is investigating the foundation over "suspected" impropriety.  Not surprisingly, the Trump campaign has called Schneiderman, a Democrat, a "political hack."

Let's talk about transparency now.  It's not Hillary who hasn't released her tax returns.  It's Donald Trump.  If he has nothing to hide, why doesn't he release them for heaven's sake.  Furthermore, Trump hasn't been forthright about his medical history either.  One day after he announced he would release his larger health history on The Doctor Oz Show, Dr. Oz admitted that he wouldn't ask the Republican nominee any difficult questions.  "This is a doctor's office, the studio" Oz declared yesterday morning on Fox and Friends.  "So, I'm not gong to ask him questions he doesn't want to have answered, and I also don't want to talk about anyone else."

It's not Hillary, but Donald Trump, who is outspoken in his admiration for Russian President Vladimir Putin.  It's not Hillary, but Donald Trump, who is the favoured candidate of white supremacist David Duke.  It is Trump who thinks hat climate change is a hoax, despite a mass of scientific evidence to the contrary.  It' is Trump who wants to revoke the Affordable Care Act, commonly known as "Obamacare," despite the fact that millions of American now have health insurance.  Hillary, on the other hand, has promised to continue and improve upon Obama's health care policy.

Female leaders are nothing new.  Germany's Angela Merkel and Britain's Theresa May currently lead two of Europe's most powerful countries.. Now Hillary Clinton has made history by becoming the first woman presidential nominee of any major American  political party.  Unfortunately, due to her gender, she has been disparaged and denigrated.

The  Republican Party is the party of Abraham Lincoln.  Surely the GOP can do better than to elect Donald Trump as its nominee.  America can do better than to elect him.  It's sad that he has come so close to occupying the Oval Office.  It will be even sadder if he wins the election.  The media are a huge mart of the problem.  Trump is a born showman, an entertainer.  The media find him immensely entertaining. They enjoy covering his controversial comments and his many antics.  Trump revels in the attention. He enjoys performing for the cameras.  Is it any wonder that some American's have trouble distinguishing between "realty" and a "realty show?"  The lines have been so blurred that Trump himself behaves as if he is auditioning for a television show - The Presidency of Donald Trump, starring Donald Trump.  Voters need to be reminded that the American presidency is not a game.  It's not a show and its certainly not a real estate deal.