The World Cup Legacy: Is It Really Worth It?

Okay, fans of the "beautiful game."  Here is an infographic on the legacy of World Cups.  As we enjoy this year's FIFA World Cup in Russia, let's take a look at some graphics and statistics about previous World Cups in Korea/Japan 2002, Germany 2006, South Africa 2010 and Brazil 2014.  Was it really worth it for those countries to host this international football/soccer championship.  I hope this provides you with some insight. 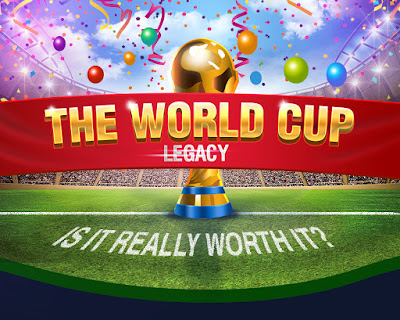 In order to host a World Cup, countries have to go through an arduous bidding process, competing against other nations for the prize of hosting the biggest sporting spectacle on Earth. However, more is promised than just a month long festival of football. When any major sporting event takes place, a lot is said about the legacy that it will leave behind once all the spectators have went home. This is especially true for the World Cup. The hosting nation often builds new stadiums, infrastructure and accommodation. In return for this, an economic stimulus is promised. A World Cup is meant to leave permanent benefits for the host nation, in terms of job creation, increased participation in football and public facilities. But does this happen? We’ve analysed some of the key outcomes of the previous four World Cups to find out.

During the 2002 World Cup, co-hosted by South Korea and Japan, South Korea’s national side miraculously made it the the Semi Final’s, narrowly losing 1-0 to a 75th minute Michael Ballack strike. The event was hailed as a success for its seamlessly smooth operations and excellent football, but what effect did this have on both of the host countries? Tourism to Japan increased after the tournament. The Japanese public opinion of South Korea reached an all time high, helping to heal long standing issues between both countries, stemming from WW2. Although football is popular in Japan today, baseball remains the nations favourite pastime. The tournament reportedly cost a combined total of $7.5b to host, with an estimated economic impact of $11.86bn, making the tournament a financial success. This was the first time the World Cup was hosted across two countries. 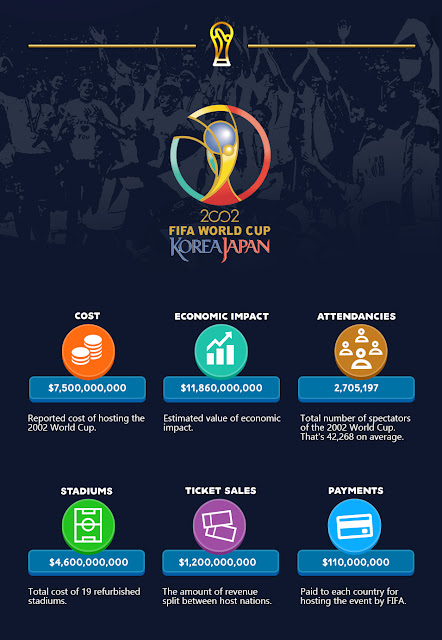 The 2006 World Cup in Germany was widely praised as a tremendous success for the nation. According to the German government, tourism revenue increased by around $400m during the tournament, helping to boost the Germany economy. Also, a staggering 500,000 new jobs were created in the lead up to the tournament. The city of Cologne reported that their visitor numbers after the World Cup increased by between 7& and 10%. Another tangible benefit was that in preparation for the tournament, the German government invested the sum of €37b in infrastructure such as roads, transportation and facilities, so that the country could facilitate the surge in visitors. This is something that the German people still benefit from today. The German League also benefited by being awarded $70m, which was in turn put into grassroots development, so that young Germans could dream about playing in a World Cup one day themselves. 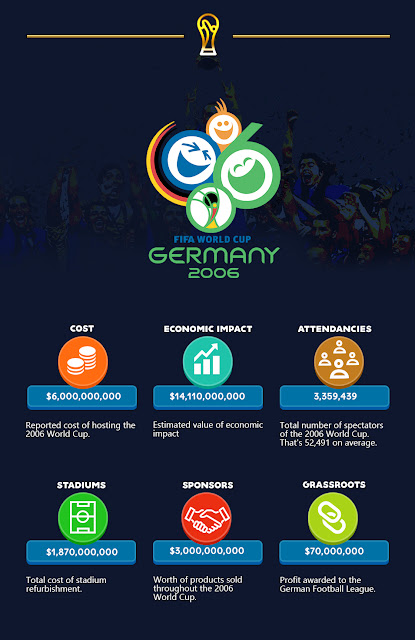 South Africa spend around $4bn on the 2010 World Cup, investing the money in six new state of the art stadiums and upgrading infrastructure such as roads and airports. FIFA generated a staggering $3.36bn from the event and awarded South Africa with $100m to fund grassroots projects around the country. Unfortunately, the South Africa World Cup has done nothing to improve the fortunes of the nations national team. Nicknamed Bafana Bafana, the team failed to qualify for Russia 2018, finishing bottom of their qualifying group with 4 points from 6 games. The national league still suffers from poor attendances, excluding the countries two major teams, Orlando Pirates and the Kaiser Chiefs. The estimated average cost of a tourist attending South Africa for the World Cup is estimated to be $13,000. The Cape Town stadium hosted five first round matches, and went on to host a second round, quarter final and semi final throughout the tournament. The stadium cost a reported $600m with the nations total spending for stadium construction and reburbishment topping $1.4bn. This left many South African’s wondering if they money could be better spent elsewhere in the country. 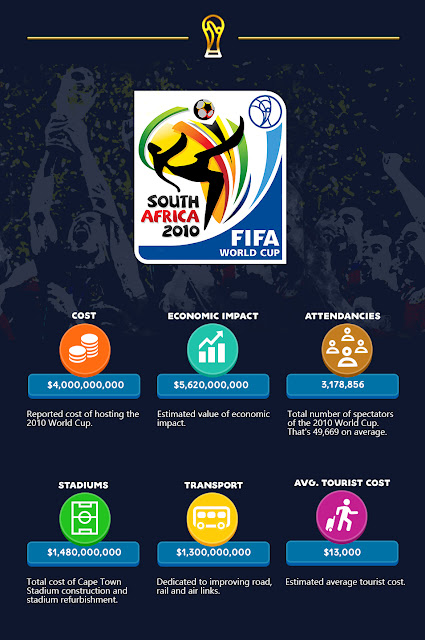 Widely criticised for leaving Brazil with several expensive but dormant stadiums, the 2014 World Cup is one that divides opinion. Brazil exited the tournament in a humiliating 7-1 defeat to Germany in the Semi Final, leaving the Selecao’s dream of winning the World Cup on home soil in tatters. Despite initial concerns, the 12 World Cup stadiums were ready on time for the opening ceremony to begin. However, now lies several near-abandoned stadiums which struggle to host any football at all. The most expensive stadium, adding up to a total cost of $550m, is located in Brasilia and is being used as a parking space for buses. 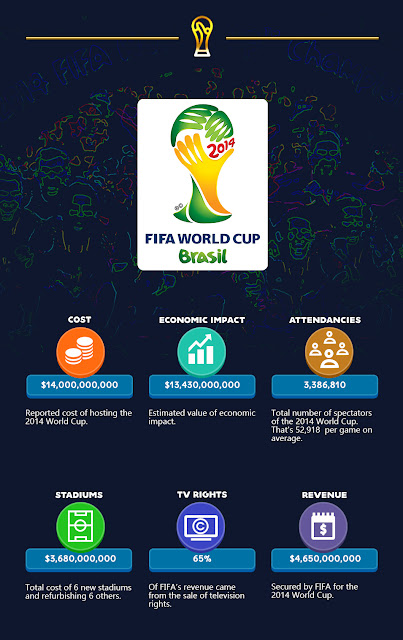 https://money-pod.co.uk/contact/
Posted by Joanne at 3:21 PM No comments: