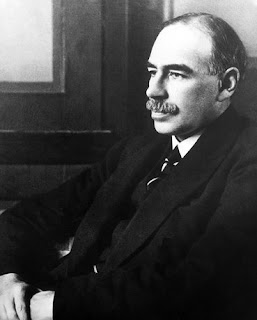 The important thing for Government is not to do things which individuals are doing already, and to do them a little better or a little worse, but to do those things which at present are not done at all.

- John Maynard Keynes
From The End of Laissez-Faire [1926]


Today is the 130th anniversary of the birth of John Maynard Keynes. The influential British economist, journalist and financier was born on June 5, 1883 in Cambridge, England.  His father, John Neville Keynes, was also an economist.  His mother, Florence Ada Keynes, was a social reformer who became Mayor of Cambridge in 1932 at the age of 70.

As a young man, Keynes was selected as a delegate to the Paris Peace Conference after World War I.  He watch unhappily as the Allies imposed severe war reparations on a defeated Germany. When he returned home to England, he wrote a book, The Economic Consequences of Peace, in which he warned that the reparations would lead to a poor and unstable Germany that would eventually threaten the security of the entire European continent.  With the rise of Hitler and Nazi Germany, Keynes`prediction came true.  The Allies, having learned their lesson the hard way, did not treat Germany so harshly after World War II.

It was during the Great Depression of the 1930s that Keynes made his most significant impact as an economic theorist.  In 1936, he published what is generally regarded as his greatest work, The General Theory of Employment, Interest and Money.  While other economists were struggling to figure out what had gone wrong, Keynes challenged the prevailing economic orthodoxy and the classical liberal view that the markets would eventually settle into an equilibrium.  He argued that economic intervention should be used as a means to bring about economic recovery. Governments, he said, must come forward and pump money into the economy during slowdowns. Businesses won't do it, because they cut back on their investments during economic slumps. This, Keynes deduced, leads to a vicious circle of fewer jobs, less consumer spending and greater economic misery.

Keynes' theories were considered quite radical during the Depression era.  As Time magazine points out in its book 100 Hundred Ideas That Changed the World: History's Grestest Breakthroughs, Inventions and Theories, " . . . the idea that governments should use deficit spending as a means to correct economic decline"  was at one time "an affront to the belief that free markets functioned best when left entirely alone."

Keynes' economic theories on the causes of long term unemployment have come to be known as "Keynesian economics."  In The General Theory, Keynes contends that it is a fallacy to assume that competitive markets will produce full employment.  He argues that high unemployment and lack of investment is likely to be the natural state unless government action is taken.  Thus, the reduction of  wages and benefits not only creates financial hardship but ultimately fails to reduce unemployment. 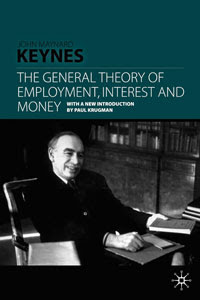 In the 1950s and 1960s, most capitalist countries adopted Keynesian principles.  With the advent of  Thatcherism in the United Kingdom and the election of Ronald Reagan in the United States, Keynesian economics fell out favour in the 1980s.  The global recession of the early 21st century, however, has clearly demonstrated what happens when capitalism is left unrestricted and financial institutions do not have sufficient regulations.  The result is mortgage foreclosures, severe unemployment and economic recession.

I have consistently argued in this space that jobs are more important than the deficit or the debt. In fact, increased employment is the best solution for high deficits.  Job stimulus is the key to escaping the economic doldrums.  Yet, this not mean that profligate government spending is acceptable. The hard-earned money of taxpayers should and must be used responsibly. Nevertheless, as Keynes asserted, government must act at certain times or no one else will do what needs to be done.

In my hometown of Toronto, our scandal-laden, neo-conservative mayor, Rob Ford, refuses to spend tax money on improving transit.  He speaks out in favour of building new subways to ease traffic congestion but can't explain how it will be paid for without raising taxes.  Meanwhile, traffic bottleneck is costing the city a great deal of money in lost production time and hurting citizens much more than any tax increase.  Private enterprise will no produce enough money to finance the city's transportation needs.

Really, Mr. Romney?  Well, the non-partisan and highly-respected U.S. Congressional Office does not concur with your assessment.  According to its 2012 analysis, the stimulus package added up to 3.3 million jobs to the American economy during the second quarter of 2010.  It may have prevented the economy from falling back into recession.

Keynesians are not calling for the end of capitalism.  They are merely opposed to unbridled or unfettered capitalism.  It is the  libertarian ideals of Republicans that have truly failed.  The disastrous policies of former President George W. Bush set the stage for the terrible economic collapse of 2008 and ushered in the Great Recession.  Obama inherited the mess and the G.O.P. has been relentless in its efforts to prevent him from cleaning it up.

The neo-conservative formula is simple.  Government is bad and must be eliminated from our lives.  The free market can solve all our economic problems if we just believe in the magic of Adam Smith's "invisible hand."  Neo-conservatives like to point to Greece and its deficit woes.  They don't mention that Western European countries such as Britain, Italy and Spain, have been economically suffocated by their governments' stubborn adherence to severe austerity measures. Austerity has not cured their financial woes.  Yet these countries continue to cut back as unemployment increases and the gap between the very rich and the very poor deepens.  The sad  truth is that the situation will not improve as long as these nations remain in an economic straitjacket.

Here in Canada, Prime Minister Stephen Harper's Conservative government employed Keynesian economic measures in its 2009 budget, acting in a manner contrary to its conservative principles.  In response to the harsh global economic downturn, the Harper government introduced an estimated $40 billion in economic stimulus, including $12 billion for a variety of infrastructure projects involving roads, Internet broadband access and renovations for aging infrastructures.  Further funding  was allocated for social housing renovation projects, job training and green initiatives.  The government estimated that the $40 billion in economic stimulus would create close to 200,000 jobs.

The Harper government, in order to appease its hard-core supporters has cut back again and Finance Minister Jim Flaherty has expressed frustration at the over $500 million that corporations have just sat on and refuse to invest in the economy.  Mark Carney, the Governor of the Bank of Canada (who will assume the position of Governor of the Bank of England in July), called it "dead money."  An exasperated Flaherty declared,  “At a certain point, it’s not up to the government to stimulate the economy, it’s up to the private sector, and they have lots of capital.”  Well, yes, but the reality is that big business has not been investing in the economy and it has not been creating jobs.  Corporations lack confidence in it and are afraid to risk their profits.  Thankfully, Canadian banks are well-regulated or this country would have suffered more economic pain when the U.S. economy crashed.

Prime Minister Manmohan Singh of India, an economist and the leader of the world's most populous democracy, spoke in support of Keynesian fiscal stimuli during the 2008 G-20 Summit in Washington D.C.  At the India-Africa Summit last week in Addis Ababa, Ethiopia, Singh announced that his country will lend African nations $5 billion for the next three years "to help achieve the development goals of Africa with an additional $700 million U.S. dollars to establish new institutions and training programs."  The money will be used primarily to fund infrastructure, including railways, IT, telecommunications, micro enterprises and agricultural improvements such as crop diversification.  Prime Minister Singh was asked how he can feel comfortable investing in African countries when so many of them lack political stability.  Quoting John Maynard Keynes, he replied that "an act of investment is an act of faith".

The evidence has proven that John Maynard Keynes was right,  It is truly unfortunate that neo-conservatives can't or won't recognize the facts.  Their attitude is akin to that of the Flat Earth Society or those who refuse to believe that climate change is real and that human beings have contributed greatly to it.

John Maynard Keynes passed away on April 21, 1945.  He died of a heart attack at Tilton, his farmhouse reisidence near Fife, East Sussex, England.  He was 62 years old at the time of his death and was outlived by both his parents.  His father died in 1949 and his mother in 1958.  If he were alive today, I'm sure he would provide us with an incisive analysis of the 2008 economic downturn.