Language Corner: Words that have a negative connotation for women

As we all know, words matter.  Some words in the English language display a subtle or not-so-subtle anti-female bias.

Kieran Snyder is the CEO and co-founder of Textio, an augmented writing platform that predicts the response one will receive based on the language of a particular piece of writing.  Snyder is a linguist and a writer.  She holds a PhD in linguistics from the University of Pennsylvania and her work has been published in Fortune, Re/Code, Slate and The Washington Post.

In a 2014 study for Fortune.com, entitled "The Abrasiveness Trap: High-achieving men and women are described differently in reviews," Snyder examined 248 job performance reviews from 180 people (105 men and 75 women).  The reviews were taken from 28 different tech companies of a variety of organizational sizes.

Snyder found a common occurrence in her study.  One particular word appeared 17 times in reviews of women, and not once in any of the reviews of men.  That word was "abrasive."  Other words, such as "bossy " "aggressive," "strident," "emotional" and "irrational" were applied unequally to describe women.

The word "aggressive" did appear in two reviews of male employees, but only in the context of them being encouraged to be more aggressive.  Reviews of women, on the other hand, only ever used the term "aggressive" as a means of criticism.

Some Subtle and Not-so Subtle Sexist Terms to Avoid 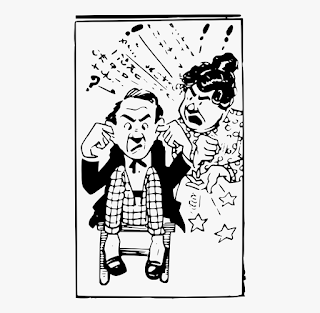 NAG: According to Merriam Webster Dictionary, nag as a verb, means "to irritate by constant scolding or urging; to badger, worry to find fault incessantly : Complain"  As a noun a nag is "a horse, especially one that is old or in poor condition"  It is also "a person who nags."

Although dictionaries such as Meriam Webster does not explicitly define a nag as a female, the implication is clear.  The word is subtly sexist.  One often hears reference to a "nagging wife," such as in the cartoon above.  How often does one hear the term "nagging husband?"  Some terms that are        similar to nag include "fishwife," "hen-pecked," "shrew"  and "harridan."  We hear of a "hen-pecked husband."  When do we hear of a "hen-pecked husband?" One of William Shakespeare's most well=known plays is titled The Taming of the Shrew.

SPINSTER and OLD MAID:  There are no similar terms for older unmarried men.  They are simply described as a "confirmed bachelor" or a "lifelong bachelor."  The words spinster and old maid are pejoratives.  They conger up an image of  a shy, unattractive or vey ugly woman.  Think of the card game "Old Maid."  The picture on the "Old Maid" card is that of a very hideous looking woman.

EFFETTE:  According to Merriam Webster, the word effette is derived from the word Latin word "effetus," meaning "no longer fruitful."   For a time it was used to describe an animal no longer capable of producing offspring.  As an adjective, it now means "lacking strength, courage or spirit; resembling a woman."

WORKING MOM:  Have you ever head of a "working dad?"

SOCCER MOM:  Have you ever heard of a "soccer dad?"

There are many more words I could include on this list.  There is clearly an anti-female bias in the language we speak.

Posted by Joanne at 3:45 PM No comments: