Clear the track, it's Eddie Shack! 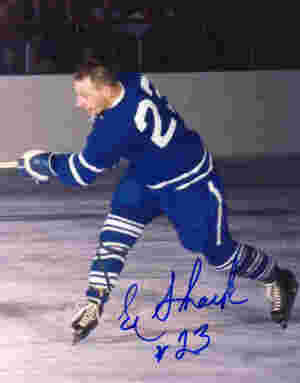 Happy Birthday, Eddie Shack!  Eddie, who turns 74 years old today, played with the Toronto Maple Leafs when they actually won Stanley Cups and true fans could afford the price of tickets for their games. He earned the nickname Eddie the Entertainer because he was so much fun to watch. I remember the very first NHL game I attended at Maple Leaf Gardens with my father when I was a young child. It was such a thrill to enter that shrine of hockey, the home of the venerable Blue and White. I was definitely awestruck by the wonder of it. What an atmosphere! The excitement was palpable and it was electric.

The local heroes played the New York Rangers that night. I recall sitting beside a man who was a fan of the New York Rangers. I found it quite perplexing and unsettling to discover that not everyone cheered for the beloved Leafs, especially in their home arena. The man disturbed me greatly and if memory serves me correctly, the Leafs lost the game to the Rangers that evening. The one player, however, who stood out in my mind was Number 23, Eddie Shack. I enjoyed watching him skate. He skated with such exuberance.

Edward Steven Phillip Shack was born in Sudbury, Ontario on February 11, 1937, the son of immigrants from Ukraine. He had worked in a coal mine and in a butcher shop when he decided to try his luck with the Guelph Biltmores of the Ontario Hockey Association (OHA).  He made the team and played in Guelph from 1952 until 1957, leading the Biltmores to an appearance in the 1957 Memorial Cup.

Eddie impressed the New York Rangers and the promoted him to their American Hockey League farm club, the Providence Reds. After one season in the minors, Eddie was sent up to the New York Rangers. He spent two seasons in Manhattan, but his play was undistinguished and he did not score many goals. In 1960, the Rangers gave up on him and negotiated a trade with the Detroit Red Wings involving Red Kelly. Kelly chose to retire rather than report to New York, so the trade was cancelled.

In November of 1961, however, Shack was traded to the Toronto Maple Leafs. The Leafs were a perfect fit for Eddie and his colourful personality made him a fan favourite. He spent five seasons in Toronto as a third-line left winger and was a member of the Leafs last Stanley Cup-winning team in 1967.

Eddie married Norma Carol in September of 1962.  The wedding took place at St. Josaphat's Ukrainian Catholic Cathedral in The Junction area of Toronto.  Rt. Rev. B. Filevich officiated at the ceremony.

Shack was well-known for his fisticuffs and I do not condone that aspect of his play. To put it bluntly, he was a very dirty player at times. Nevertheless, he did have the ability to put the puck in the net. During the 1966 season, Eddie scored a career-high 26 goals while part of a line with Ron Ellis and Bob Pulford. He never achieved that level of goal production again and was traded to the Boston Bruins in the fall of 1967.

In Boston, Shack played right wing on a line with Derek Sanderson and Wayne Cashman. He scored 23 goals for a powerful Bruins team. From then on, his career declined considerably. He was plagued with injuries the next season and spent the following four seasons in transit. Constantly on the move, he played in Los Angeles, Buffalo and Pittsburgh. The Pittsburgh Penguins sold Eddie to the Leafs in 1974, but by that time, his playing days were virtually over. Age and injury had eroded his skills and he retired after the 1975 season.

After his retirement, Eddie Shack became somewhat of an entrepreneur. He lent his name to a small chain of doughnut stores and sold Christmas trees. In the late 1970s, he appeared in Canadian television commercials. Most notably, he was the spokesman for a soft drink dealer named the Pop Shoppe. In ads for Pop Shopp, Eddie played up his prominent proboscis with the catch phrase, “He’s got a nose for value . . .” In a promotion for Schick razors, Eddie’s trademark handlebar moustache was shaved off.

To view Eddie's Pop Shoppe commercial, click on the link below.

Eddie Shack was so popular during his years with the Toronto Maple Leaf that a 1966 novelty song was written about him. It was called, Clear the track, Here comes Shack.  The song was a big hit on Canadian charts. It was recorded by Douglas Rankine with the Secrets. Click on the link below to hear a recording of Clear the track.

Eddie endeared himself to the fans with his antics. If his name was called as one of the three stars of the game, he would hurry out to centre ice and do a pirouette for the crowd. Then he would skate off with great enthusiasm. Canadian hockey writer Stephen Cole compared Shack’s playing style to that of a puppy set free on a large field.

- Joanne
Posted by Joanne at 2:39 PM No comments: Links to this post 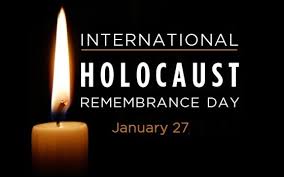 January 27th is International Holocaust Remembrance Day. Let us never forget the Nazi crimes.against humanity, especially during this time when right-wing hate groups are spreading their poison. Click on image for more information.