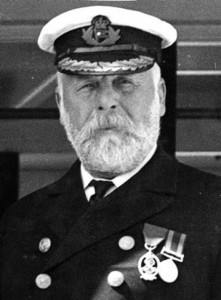 When anyone asks how I can best describe my experience in nearly 40 years at sea, I merely say, uneventful.  Of course there have been winter gales , and storms and fog the like, but in all my experience, I have never been in any accident of any sort worth speaking about . . . I never saw a wreck and never have been wrecked, nor was I ever in any predicament that threatened to end in a disaster of any sort.


Who was Edward John Smith, the captain of the ill-fated Titanic?  What was the background of the man who commanded the famed ocean liner on its doomed maiden voyage?  To what extent was he responsible for one of the most horrific maritime disasters of all time?  Many people are not familiar with Smith's name.  They simply refer to some faceless captain of Titanic.  As the 100th anniversary of the sinking of Titanic draws near, it seems appropriate to explore the life and background of Captain Smith.  The 62-year old British naval reserve officer was closing in on retirement when he took command of the RMS Titanic in April of 1912.  He died in the tragic accident and his body was never recovered.

Edward John Smith was born in the town of Hanley, Stoke-on-Trent, England on January 27. 1850 to  Edward  Smith, a potter, and his wife, Catherine.  The Smiths later became shopkeepers and young Edward attended Etruria British School.  At the age of 13, he went to Liverpool to start a seafaring career. In 1869, he apprenticed on a clipper ship called Senator Weber, owned by A. Gibson & Co., a  Liverpool company.

It was in 1880 that Smith joined the White Star Line as Fourth Officer.  He was given command of his first vessel, Republic, in 1887.  Through the years, he also commanded Coptic, Majestic, Baltic, Adriatic, Germanic and Olympic.  By the time he took charge of Titanic, Captain Smith had logged 46 years of experience on the sea, including captaining Majestic during the Boer War.  For his service during that war, King Edward VII awarded him the Transport Medal.

Regrettably, Smith's lengthy career was marred by some mishaps that happened under his command prior to the Titanic.  On February 16, 1899, while at New York pier, Germanic capsized as a result of an ice buildup in the vessel's rigging and superstructure.  On June 21, 1911, Titanic's slightly smaller sister ship, Olympic, was preparing for her maiden voyage when a tugboat, O.L. Hallenbeck, was sucked against her stern.  The reverse burst of Olympic's propeller caused serious damage to the tugboat.  White Star was sued for $10,000, but the case was eventually dismissed due to lack of evidence.

On September 20, 1911, less than a year before Titanic set sail, Olympic collided with the Royal Navy cruiser HMS Hawke in a narrow channel off the Isle of Wight.  The British war ship lost her prow (the forward part of a ship's bow).  As for Olympic, she managed to return to Southampton with one of her propeller shafts twisted.  The Royal Navy held Olympic responsible for the incident, contending that her huge size generated a suction that pulled Hawke into the larger vessel.

Despite the Hawke incident, White Star assigned command of Titanic to Captain Smith and continued to regard him as  a competent and experienced seaman.  The rapid increase in the size of ocean liners may have played a part in the previous mishaps that occurred under his command and the sinking of Titanic itself.  All of Smith's training skills and his vast experience at sea did not prepare him adequately for the advances in shipping and the sheer size of newer ships.

Captain Edward John Smith was a popular figure with a loyal clientele of passengers. Some voyageurs, particularly those of England's upper classes, would only cross the Atlantic on a ship that he captained.  Smith was well-liked by the management of White Star Line and by friends and colleagues.  They affectionately referred to him as E.J.  His salary was $6,250 per year and there was a "cash bonus" of $1,000 if any ship under his command were not damaged during the 12 months.  This was indeed a handsome sum in those days.

Captain Smith's personal life appeared to be very stable and content.  On January 13, 1887, he married 25-year-old Sarah Eleanor Pennington at St. Oswald's Church in Winwick.  Smith's wife preferred to be known by her second name, Eleanor, and she called her husband "Ted" or "Teddy."  The couple had one child, Helen Melville Smith, born on April 2, 1898 at 20 Alexandra Road, Waterloo, Litherland, near Liverpool.  Ted and his family eventually settled in Southampton on England's south coast, where the White Star office was situated.  They lived in a spacious two-gabled brick house named Woodhead,  Helen, known as "Mel," had just turned 14 years old when her father set forth on his fatal voyage on Titanic.

On April 10, 1912, the white-bearded Smith, wearing a bowler hat and a long overcoat, rode in a taxi from his home to the Southampton docks.  Shortly after12 noon, Titanic, the largest and most luxurious ship in the world set off for New York City.  Her maiden voyage got off to a shaky start.  As the grand ocean liner was leaving port, the suction caused the ropes of a docked ship nearby to break.  Tugboats were rushed to the scene in order to prevent a collision between the SS. New York and Titanic.

At about 11:40 p.m. on Sunday, April 14, 1912, Titanic struck an iceberg in the North Atlantic off the coast of Newfoundland.  A lookout had apparently sighted the iceberg and rang a warning bell three times.   He then telephoned Sixth Officer James Moody and alerted him to the situation, but it was too late to prevent the fatal disaster.  The ship sank for over two and a half hours, killing more than 1,500 people.

In "Titanic Research," an April 29, 2006 piece by Samuel Hepburn appearing in Encyclopedia Titanica, Hepburn ponders the question of how the Titanic could have unexpectedly discovered a solitary iceberg in its way.  He notes that the sworn testimony of Moody and Reginald Lee, another Titanic lookout, leaves the impression that only one iceberg was seen prior to the deadly collision.  He writes that "many people believe it to be improbable for the Titanic to have steamed deep into iceberg infested waters and suddenly find a single isolated iceberg dead ahead in its path."  Other icebergs, Hepburn points out, "should have been sighted earlier especially since we know that in the morning, after the sun came up, many icebergs were seen all around the area of the wreckage"

On the day of the disaster, Titanic received six ice warnings.  Unfortunately, the messages were all ignored by the wireless operator who was more concerned with transmitting passenger messages.  The weather was also a factor in the collision.  The moon was not out and the water was calm, making it difficult to spot the iceberg.  If the water had been less still, breakers would have formed around the iceberg, making it easier to see from a distance.

Captain Smith's final actions during the sinking of the ship remain uncertain and there is much speculation about the details of his death. Some historians maintain that Smith was on the bridge at 2:13 a.m. and that he went down with the ship.  Other sources, however, state that he went to the wheelhouse.  There are also sources that claim he was present in the radio room.  The stories vary and they conflict each other.  For example, some survivors of the disaster recalled having seen Smith on the ships's bridge and some claimed to have witnessed him jumping off the deck.

Just before 3.00 p.m., on Thursday, April 18, the following message was posted on the notice-board at the White Star office in Southampton.   The poignant words were from Eleanor, the wife of Captain E.J. Smith.

TO MY POOR SUFFERERS:
My heart overflows with grief for you all, and is laden with sorrow that you are weighed down with this terrible burden that has been thrust upon us all.
May God be with us and comfort us all.
Yours in deepest sympathy
(Signed) Eleanor Smith

Captain Smith's widow remained in Southampton for a while after her husband's death.  She later relocated to London.  On April 28, 1931, she was run over by a taxi near her London home and died at the age of 70.  Helen Melville Smith married Captain John Gilbertson of Liverpool of Liverpool, England.  Gilbertson, the youngest captain in the British merchant navy, died of black water fever while returning from India on board his first command ship.

In 1922, Helen married Sidney Russell-Cooke, a stockbroker, at St. Mark's Church, Mayfair.  The couple had twins, a son named Simon and a daughter, Priscilla, born at Bellcroft, London on June 18, 1923.  Priscilla wed a lawyer, John Constantine Phipps, She died soon after of polio in Scotland on October 7, 1947.  Simon, who never married, was killed in battle during World War II on March 23, 1944.  Russell-Cooke, died in a hunting accident on July 30, 1930.

On July 29, 1914, Helen Melville Smith unveiled a statue of her father in Lichfield, England.  Its sculptor was Lady Kathleen Scott, widow of Antarctic explorer Robert Falcon Scott.  The plaque beneath Captain Smith's memorial reads: Commander Edward John Smith RD, RDR. Born January 27, 1850, Died April 15, 1912, Bequeathing to his countrymen the memory and example of a great heart, a brave life and a heroic death. Be British. (There is an apocryphal story that Smith's last statement to his crew was, "Be British.")

In 1934, Helen moved to the quiet country village of Leafield, Oxfordshire and died there on August 18, 1973.  Mel was 75 years old at the time of her passing.  Since both of her children died childless, she left no descendants. Thus ended the progeny of Captain Edward John Smith.