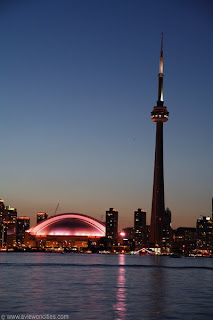 We all claim to be citizens of the world, but you people who live in a city like Toronto, you truly are those citizens.  You have so many ethnic groups here and you know them all so well.  All you have to do is turn the corner to make contact with another part of the universe.  To be able to foster a deep understanding of people and work with that understanding to achieve a common cultural , economic and spiritual good : that is the dream of most people.  And you have that dream here in Toronto.
- Yo-Yo Ma, famed cellist,
as quoted in the Toronto Star, May 26, 2012


DISASTROUS WEEKEND FOR T.O.
I was away from Toronto for about five days, from May 30th to June 3rd.  During that time, I was visiting relatives in Quebec City.  While I was in that beautiful, historical city, the new from home was very  disconcerting.  First I learned that there was a flood at Union Station.and that the station had to be closed down temporarily.  Then I heard that there was a shooting at the Eaton Centre.  On Saturday, June 2, a man was killed and six people were injured when a man opened fire at the Urban Eatery, a recently-opened food court in the huge downtown mall.  The Urban Eatery is modern and airy.  It made its debut last September after a $48 million renovation.  It contains 24 restaurants and seats 900 people.  I have eaten there a few times myself.

One of the six people wounded in the attack, a 22-year-old man, died of his injuries today.  The accused gunman, Christopher Husbands, was known to police and he gave himself up.  He was targeting the murder victim and he was under house arrest.  Obviously he shouldn't have had a gun in his possession and he shouldn't have had electronic monitoring.

The sad part about the incident, aside from the shootings themselves, is that it's damaging to Toronto's image and to the sense of security of its citizens.  We can't live in fear, however.  We can't lock ourselves up in our homes.

NOTE:  While visiting Quebec City, I rode the buses a few times.  I couldn't help but notice that their buses were much cleaner than our TTC buses.  There were no candy wrappers and newspapers strewn on the seats and on the floor.  I also did not observe people eating on the Quebec City buses.

PLASTIC BAGS BANNED IN TORONTO
Much to the chagrin of Toronto Mayor Rob Ford, plastic bags will be banned in Toronto.  The ban, scheduled to  take effect on January 1, 2013, is one of the largest of its kind in North America.  It even includes compostable and biodegradale bags.  Cities such as Portland, Oregon, Seattle, Washington, San Francisco, California and Fort McMurray, Alberts all have similar bans, but none of those municipalities is as populous as Toronto.

What began as a debate at City Hall on abolishing the five-cent fee on plastic bags, backfired on the controversial mayor.  At first, everything appeared to be going Ford's way.  At his urging, Toronto council decided to scrap the nickel fee.  Then something quite unforeseen happened.  Councillor David Shiner, a member of Ford's executive team, unexpectedly put forth a motion prohibiting retailers from distributing or selling any plastic shopping bags.  To the delight of environmentalists, council approved Shiner's motion.by a vote of 24-20.

Mayor Ford said that he expects the ban to undergo a legal challenge and he blamed the city's taxpayers for council's vote to ban plastic bags.  In a radio interview, he told AM 640 host John Oakley that he wants "people to get engaged in municipal politics, and find out who their councillor is and know how they vote."

FEATURED TORONTO-BORN PERSONALITY
Neil Percival Young was born in Toronto General Hospital on November 12, 1945.  The influential singer-songwriter is the son of the late Scott Young, a well known Canadian writer and sports journalist.  Neil began performing solo in Canada in 1960.  He relocated to California in 1966 and co-founded the folk rock band Buffalo Springfield.

In 1969, Neil Young became the fourth member of Crosby, Stills and Nash.  He has also enjoyed a very successful solo career and he has been twice inducted into the Rock and Roll Hall of Fame, as a solo artist in 1995 and as a member of Buffalo Springfield in 1997.  On December 30, 2009, Young became an Officer of the Order of Canada.


DID YOU KNOW?
Did you know that Ernest Hemingway's first child was born in Toronto.  Between 1920 and 1924, the great  author worked as a correspondent for the Toronto Star newspaper.  While Hemingway was writing for the Star in 1923 and 1924, he and his first wife, Hadley Richardson, lived in an apartment building at 1597-1599 Bathurst.Street. Their son, John Hadley Nicanor "Jack" Hemingway was born at Toronto's Wellesley Hospital on October 10, 1923.

The Bathurst Street building is now known as ''The Hemingway" in honour of Ernest Hemingway.  It is a Forest Hill condominium.   Below is a photo of The Hemingway. 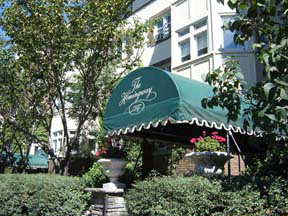 Ernest Hemingway did not say many positive things about Toronto or Canada.  You have put that in the context of the times, however.  During the 1920s, Toronto was very staid and conservative.  It was not an very entertaining city back then.  For an adventurous man like Hemingway, it was rather boring.  If Hemingway were alive today, he'd see a very different place.  An influx of immigration has transformed Toronto into a very lively metropolis.