Madame Tussauds : The woman behind the wax museums 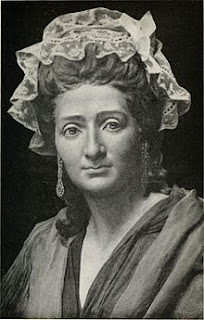 Marie Tussauds lived an extraordinary life. The founder of the famous London wax museum died 161 years ago.  Born Anna Marie Grosholtz in Strasbourg, France, she was the daughter of a German soldier. Her father, Joseph Grosholtz, was killed in the Seven Years’ War, about two months before Marie’s birth in December of 1761. Her mother, Anna Marie Walder, found employment as housekeeper to Dr. Philippe Curtius in Berne, Switzerland.

Dr.Curtius, a physician, was skilled in wax modelling, which he used to depict anatomy. The good doctor relocated to Paris in 1765. Two years later, when Marie was 6 years old, she and her mother joined him there. In 1770, Curtius opened a museum featuring life-size wax figures. The exhibition was well received and became a popular attraction among Parisians and visiting royalty. It was moved to the Palais Royal in 1776.

Dr. Curius opened a second exhibition of his wax models in 1782 on Boulevard du Temple. It was called “Caverne des Grands Voleurs” and can be described as a forerunner to the eventual chamber of horrors. Young Marie became Curtius’ prodigy. He schooled her in the art of wax modelling and she proved to be immensely talented. By 1778, she was experienced enough to create wax figures of the renowned philosopher, Jean-Jacques Rousseau and the great French writer, Voltaire.

In 1780, Marie was appointed art tutor to Madame Elisabeth, the sister of King Louis XVI. For nine years, until the outbreak of the French Revolution in 1789, she lived in the splendour of the Palace of Versailles. During the “Reign of Terror” that followed the revolution, Marie was arrested and imprisoned due to her association with the royal family. Her head was actually shaven in preparation for execution by guillotine. Thanks to the intervention of actor, dramatist and revolutionary Jean-Marie Collot d’Herbois, however, her life was spared. She was later assigned the gruesome task of creating wax death masks from the severed heads of the victims of the guillotine.

When Dr, Curtius died in 1794, Marie solely inherited his two famed wax museums. In 1795, Marie married an engineer from Macon named Francois Tussauds. By 1800, she had given birth to a daughter, who later died, and two sons, Joseph and Francois. During the Napoleonic Wars, there was disorder and instability in France. Due to the country’s economic decline, visitors to Marie’s wax exhibitions dwindled. In 1802, concerned about her future, Marie crossed the English Channel with her elder son, Joseph, and her collection of wax models. Francois, the younger son, joined them later.

Marie never returned to France and she never saw her husband again. For 33 years, she lived a nomadic existence touring the British Isles. In 1835, tired of travelling, she finally established a permanent home for her wax exhibition on Baker Street in London where she continued working until eight years before her death. In 1838, she wrote her memoirs.

Madame Tussauds died in her sleep in London on April 16, 1850. She was 88 years old at the time of her death. Marie’s two sons inherited her collection and they, along with her grandchildren, continued the business. In 1884, decades after her death, Marie’s museum was moved from Baker Street to its present location on nearby Marylebone Road.

Madame Tussauds legacy survives in the many Tussauds wax museums throughout the world. In November of 2010, I visited the branch in Las Vegas. The Vegas attraction is interactive and American-oriented. You can have your photo taken with wax figures of JFK and Jackie or with President Obama in the Oval Office.

What can speak every language?

Well, these are certainly not glory days for Toronto sports franchises. On April 13th, the Raptors ended their miserable season with a 97-79 loss to the Miami Heat. The Raps finished with a mere 22 wins amid talk of trading their star player, 7-foot Italian, Andrea Bargnani. Many questions remain unanswered involving the future of coach Jay Triano and general manager Bryan Colangelo.