All About Christmas Trees 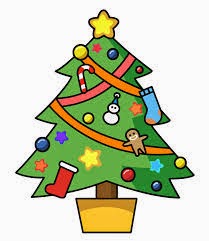 
This is one of several versions of the English lyrics to "O Tannenbaum" ("O Christmas Tree"), a Yuletide song based on a traditional German folk song.  By the beginning of the 20th century, the song came to be sung as a Christmas carol.  "Tannenbaum" means "fir tree" in German - Tanne ("fir:") + Baum ("tree").  The modern lyrics were written by Ernst Anschütz, a teacher, composer and organist in Leipzig, Gerrmany.


According to the Encyclopaedia Britannica, "evergreen trees, wreaths and garlands" were used by the ancient Egyptians, Chinese and Hebrews as a means of symbolizing eternal life.  During the winter solstice, pagans decorated their dwelling places with tree branches as a reminder of the spring to come.

Tree worship was prevalent among European pagans.  Britannica says that even after the advent of Christianity, the custom of decorating a house or barn with evergreens to ward off the Devil at the New Year continued in Scandinavia.  Trees were also set up to feed birds at Christmastime.

The tradition of decorating Christmas trees originated in early modern Germany.  The trees were originally decorated with edible ornaments such as gingerbread, apples and nuts.  A figure of the Baby Jesus was placed at that top of the tree.  This eventually changed to an angel or a star to represent the Star of Bethlehem that the Wise Men followed.

The first Christmas trees appeared in Britain in the 1830s.  They were popularized by Prince Albert, the German husband of Queen Victoria.  In 1841, Albert had a Christmas tree set up in Windsor Castle  In 1848, the Illustrated London News published a drawing of "The Queen's Christmas at Windsor Castle."  The drawing later appeared in an American publication, which helped spread the custom of having Christmas trees to the United States and beyond.


Christmas trees in Victorian England were festooned with little gifts and toys.  They were also decorated with candles to represent stars.  These, of course, were replaced with electrical lights, although candles are still used in some parts of Europe.

German settlers brought Christmas trees to North America as early as the 17th century. The tradition of Christmas trees was introduced to Canada by Brunswick soldiers in the Pre-Confederation winter of 1781.  They were stationed in the Province of Quebec to defend the colony from an American attack.  General Fredrich Adolf Riedesel, a German, was the commander of these mercenary soldiers who had fought alongside the British in the Revolutionary War.  He and his wife, Baroness Frederika von Riedesel (also known as Lady Fritz), hosted a Christmas Eve party at Sorel in which they served traditional plum pudding for the English and entertained their German guests with a small candle-lit fir tree adorned with various fruits and candies.  Below is a drawing of the Von Riedesel family at Fort Sorel. 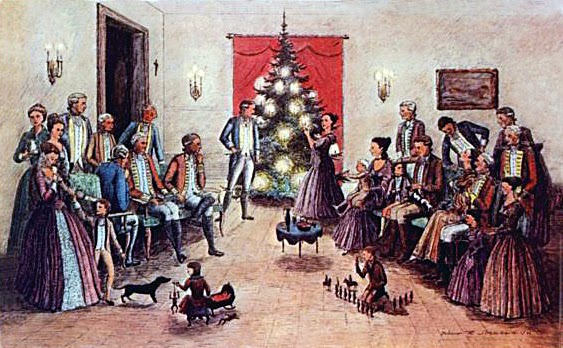 By the 19th century, Christmas trees were very much in vogue.  The had become popular in in Austria, Switzerland. Poland, and the Netherlands.  Christian missionaries from the West introduced Christmas trees to Japan and China in the 19th and 20th centuries.  They had ornaments of detailed paper design.

Did you know that the sparkling tinsel wrapped around Christmas trees also originated in Germany. Tinsel was first made in Nuremberg in the early 17th century.  The tinsel, made from strands of silver, was first used for decorating sculptures. 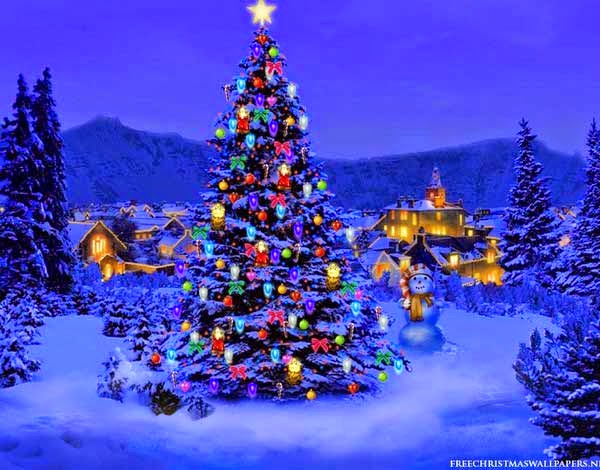 Below is a photo of the Christmas tree in London's Trafalgar Square.  It is a gift from the people of Norway to the people of Britain, and has been  token of  the friendship between the two countries since 1947.  The tree is taken from the forests surrounding the city of Oslo and every year there is an official ceremony to light it up.


Below is a photo of the U.S. national Christmas tree at the White House in Washington, D.C.

The most famous Christmas tree of all may be Charlie Brown's tree from the 1965 animated Peanuts special A Charlie Brown Christmas.  There's something sweet about it, isn't there?