Jim Croce: Photographs and Memories of His Life 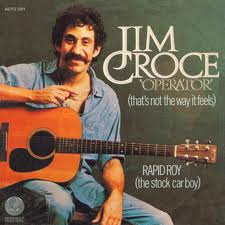 From the song "Photographs and Memories"
Lyrics by Jim Croce

The songs we listen to in high school tend to linger in our minds.  They are never forgotten.  That is why I will always remember the impact Jim Croce's music had on me.  When I was in high school in the 1970s, Jim was one of the most popular singers of the day.  He wasn't a flashy dresser and he wasn't given to fancy stage antics or high tech glitz.  Jim had an honest, down to earth style.  He was a blue-collar kind of guy who preferred to wear jeans.  His hair was thick and wavy and he sported a handlebar moustache.  On stage, it was just the man, his music and his acoustic guitar.

Croce told stories through his songs and people related to them.  Of his music, Jim once said: "I kinda like to write songs about things that a lot of people have experience with, 'cause it really makes the songs communicate."

I am paying tribute to Jim Croce today because it is the 38th anniversary of his death.  Jim was only 30 years old when lost his life in a small commercial plane crash on September 20, 1973.  He had just performed a concert at Northwestern State University in Natchitoches, Louisiana and was flying to Sherman Texas. for another concert.  The weather was foggy and the Beechcraft 1E8S plane Croce had chartered crashed during takeoff from Natchitoches Regional Airport when it failed to clear some pecan trees at the end of the runway.  The pilot and all five passengers perished in the accident.  The passengers included Croce, his lead guitarist Maury Muehleisen, his booking agent Kenneth D. Cortose, his road manager Dennis Rast and opening act comic George Stevens.

Just prior to his death, Jim had finished recording a new album.  The album was called I Got a Name and it was released posthumously on December 1, 1973.  Its title track had been featured as the theme to the movie The Last American Hero which premiered two months before Croce's tragic passing.

James Joseph "Jim" Croce was born in South Philadelphia on January 10, 1943 to an Italian-American family.  He took an interest in music at an early age and learned how to play "Lady of Spain" on the accordion.when he was five years old.  He started to become really serious about music as a career while attending Villanova University in Pennsylvania in the early 1960s.  He formed various bands there and performed at fraternity parties and at coffee houses.  In those early days, Jim played anything the people wanted to hear, from blues to railroad music.  He eventually found a job at a Philadelphia R&B station.

After a stint in the United States Army, Jim returned to Philadelphia and taught special education at a high school before deciding to give his music career another chance.  On August 28, 1966, he married Ingrid Jacobson.  Jim and Ingrid performed as a duo and sang the songs of Ian and Sylvia, Gordon Lightfoot, Woody Guthrie and Joan Baez.  Eventually, they began composing their own music.

In 1968, on the advice of record producer Tommy West, the couple moved to New York City where they played the coffee house circuit.  In 1969, they recorded an album titled Jim and Ingrid Croce.  For the next two years, they promoted their album, performing at small clubs and colleges.

Disillusioned with New York, Jim and Ingrid returned to Pennsylvania and settled in the countryside town of Lyndell in Chester County.  On September 28, 1971, their only child was born, a son named Adrian James Croce, known as A.J.  During that time, Jim worked in construction and did some studio work in New York, mostly background for commercials.

Croce's big breakthough came in 1972 when he signed a three-record deal with ABC Records.  That same year, he released two albums, You Don't Mess Around with Jim and Life and Times.  The title track from You Don't Mess Around with Jim was released as a single and it reached the U.S. Top Ten.  Another song from the album, "Bad Bad Leroy Brown" became a huge hit.  By August of 1973, "Bad Bad Leroy Brown" was the #1 song in the United States.  Jim toured the country and appeared on television several times.  He was a guest host on the then-popular late night music program The Midnight Special.

To watch  video of Jim singing "Bad Bad Leroy Brown" on The Midnight Special, click on the link below.

Jim Croce's "Time in A Bottle" was featured as the theme in the opening and closing credits of the ABC made-for-television" movie She Lives!, which aired on September 12, 1973.  The next day, radio stations across the U.S. were inundated with requests for the song.  Jim would never see "Time in A Bottle" climb to the top of the charts.  He died only eight days later, another in a list of singers and musicians who have been killed in accidents while travelling on small planes.  The list includes Patsy Cline, Buddy Holly, The Big Bopper, Ritchie Valens, Rick Nelson, John Denver, Stevie Ray Vaughan, Otis Redding and Ronnie VanZant, Steve Gaines and Cassie Gaines of the group Lynyrd Skynyrd.

Ingrid Croce owns and operates a restaurant dedicated to her late husband.  It is located in the historic Gaslamp Quarter of San Diego, California.  It is called Croce's Restaurant & Jazz Bar and it was opened in 1985.

Jim and Ingrid's son, A.J. Croce, is a musician.  He is an accomplished songwriter and pianist.  On September 28th, just eight days from now, Adrian will turn 40 years old.  According to his website biography, A.J. lost his eyesight temporarily in early childhood due to a brain tumour.  From the ages of four to ten, he gradually regained his vision.  A.J.'s website refers to a wife and children, but does not mention any details such as names, dates or ages.