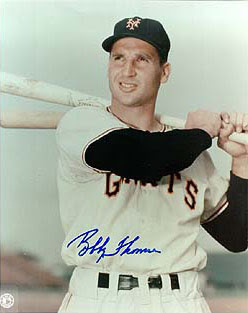 
Two days ago, on October 1, 2011, baseball fans marked the 50th anniversary of Roger Maris' 61st home run in 1961,  Today marks another important anniversary in the history of the game.  It was on this day that Bobby Thomson hit a home run known as "The Shot Heard 'Round the World."  Exactly sixty years ago, on October 3, 1951, Thomson's dramatic homer allowed the New York Giants to win the National League Pennant.

Robert Brown "Bobby" Thomson was born in Glasgow, Scotland on October 25, 1923, the son of a cabinet maker.  He immigrated to the United States as a 2-year-old and grew up on Staten Island in New York City.  He was nicknamed the "Staten Island Scot." and "The Flying Scotsman."

Bobby signed with the New York Giants right out of high school in 1942.  In December of that year, however, he enlisted in the United States Army Air Forces and trained as a bombardier.  His war service was limited to the continental United States and he played semi-professional baseball in the summer of 1945 while awaiting his discharge.  Of his time in the service, Bobby said, "There are no war stories. I ended up a bombardier, but I never got overseas. And it wasn't because I was playing baseball either. It was just a series of things that went on."

The 1951 season, his fifth full season with the Giants, started off slowly for Bobby Thomson.  He was benched in May and replaced in centre field by an up-and-coming rookie named Willie Mays.  By late July, however the speedy right-handed batter was playing regularly again, but in a new position.  He found himself playing third base.  Being an infielder seemed to agree with Thomson because he hit better than .350 over the final two months of the season.  Bobby slugged a  career-high 32 home runs that year - but the best was yet to come!

There was fierce rivalry between the New York Giants and their crosstown rivals, the Brooklyn Dodgers.  In mid-August of 1951, Thomson's Giants were 13 1/2 games behind the first place Brooklyn Dodgers in the National League.  The Giants, however, began a late-season surge and won 37 of their remaining 44 games.  On the last day of the regular season, they tied Brooklyn and forced a three-game playoff series.  The Giants' late-summer comeback, known as the Miracle of Coogan's Bluff, captured the imaginations of their fans and created a thrilling conclusion to the race between Brooklyn and the New York Giants (Coogan's Bluff is a promontory in upper Manhattan and it overlooks the site of the Polo Grounds).

The teams split the first two games of their playoff series, with the Giants winning the opener 3-1 at Ebbets Field in Brooklyn and the Dodgers romping to a 10-0 win at the Polo Grounds in Upper Manhattan.  The deciding game was to be played at the Polo Grounds on October 3rd and the stage was set for Bobby Thomson's memorable baseball moment.

It was a dreary Wednesday afternoon when the teams returned to the Polo Grounds to play for the pennant.  There were 34,320 fans in attendance, about 22,000 below capacity.  They settled in their seats to watch a pitching duel between pitching aces Sal Maglie of the Giants and Don Newcombe of the Dodgers.  Little did they realize that they were about to witness one of the most unforgettable home runs in baseball history.

In the bottom of the ninth inning, Bobby Thomson came to the plate with the Giants down by two runs.  There were runners on second and third base and one out.  A 20-year-old Willie Mays stood in the on deck circle, waiting to bat next.  Right-hander Ralph Branca, who had just come into the game, was on the mound for the Dodgers.  The count reached no balls and one strike and Branca delivered a high fastball.  Thomson then ripped a 3-run homer off the left-field stands at the Polo Grounds, lifting the the New York Giants to a 5-4 come-from-behind victory.  Play-by-play radio broadcaster Russ Hodges gleefully shouted, "The Giants win the pennant!" four times.  Bobby was surrounded by his teammates and hailed as a hero. “I can remember feeling as if time was just frozen,” Thomson once said of his memorable moment. “It was a delirious, delicious moment.”

After Bobby Thomson heroics, it was on to the 1951 World Series for the victorious New York Giants. The Giants carried the National League banner against the American League rivals, the New York Yankees. The Yankees won the October Classic in six games that year.

The 1953 season was a miserable one for the New York Giants.  They finished in fifth place, a distant 35 games behind the pennant-winning Brooklyn Dodgers.  The team lacked good pitching and won only 70 of their 154 games.  On February 1, 1954, New York Giants' owner Horace Stoneham and Milwaukee Braves' general manager, John Quinn, announced a blockbuster trade.  The Giants sent the popular BobbyThomson to the Braves along with second string-catcher Sam Calderon.  In return, the Giants acquired the services of left-handed pitcher Johnny Antonelli and another left-hander, 28-year-old Don Liddle.  The Giants also received veteran catcher Ebba St. Claire and infielder Billy Klaus.


Soon after his trade to Milwaukee, Bobby broke an ankle sliding during an exhibition game in spring training.  Bobby's ankle injury allowed a young rookie by the name of Hank Aaron to earn a place in the Milwaukee lineup.  Thomson returned to the Giants in 1957, then played for the Chicago Cubs (1958-59), the Boston Red Sox (1960) and the Baltimore Orioles (1960).

On July 17, 1960, at the age of 36, Bobby Thomson played his final major league game, finishing his career in a Baltimore Orioles uniform.  He retired after the 1960 season with a batting average of .270 and 264 home runs over the span of a 15-year career.   Bobby never made it to the Hall of Fame in Cooperstown.  His numbers weren't considered good enough.  In assessing his career, Thomson declared that “the Shot was the best thing that ever happened to me.”  “I guess people remember me because of that moment,” he said modestly. “They wouldn’t have paid much attention to me if that hadn’t happened.”

After retiring from baseball, Bobby Thomson worked as a sales executive with the Westvaco paper-products company, now part of MeadWestvaco. “I wanted to get a responsible job, stay home more with my wife and daughter and live a normal life,” he explained.  His wife Elaine passed away in 1993 and Bobby resided in Watchung, New Jersey until 2006 when he moved to Georgia to be near his daughter Nancy Mitchell.  His other daughter, Megan Thomson Armstrong, lives in Milford, New Jersey.

Bobby Thomson died on August 16, 2010 at his home on Skidaway Island near Savannah, Georgia at the age of 86.  He had been in failing health for several years and, according to daughter Megan, had recently suffered a fall.  Bobby's two daughters and six grandchildren survived him.  A son, also named Bobby, passed away suddenly at the age of 38, just before an HBO documentary about his father's home run was released in 2001.

At the time of Thomson's passing, Major League Basseball commissioner Bud Selig issued the following statement: "Bobby Thomson will always hold a special place in our game for hitting one of the signature home runs in baseball history.  'The Shot Heard 'Round the World' will always remain a defining moment for our game, illustrating the timeless quality of the national pastime."

Unfortunately, Bobby Thomson's epic home run has been tainted with allegations of sign stealing by the New York Giants in 1951.  The allegations are based on revelations by the sports columnist Dave Anderson of The New York Times in his book Pennant Races (1994) and by Joshua Prager in The Wall Street Journal in 2001 and in his book The Echoing Green (2006).

To watch a video of "Shot Heard 'Round the World," click on the link below.

Hall of Famer Dave Winfield is 60 years old today.  Was it destiny or irony that he was born on the very day that Bobby Thomson hit his famous home run?  I'm not sure, but I do know that Winfield played for my hometown Toronto Blue Jays during their championship 1992 season.  Dave was the Jays' designated hitter that year and batted .290 with 26 home runs and 108 RBI.  In Game 6 of the World Series between Toronto and Atlanta, at the age of 41, he slugged a game-winning two-run double to win the World Series for the Blue Jays.

While in Toronto, Dave was definitely a crowd favourite.  During an interview in August of 1992, he urged the rather reserved Toronto fans to be more demonstrative.  His slogan, "Winfield wants noise," could be seen on t-shirts, dolls, buttons, and signs.  At he end of the season, Dave became a free agent and signed with his hometown Minnesota Twins.  He finished his career with Cleveland in 1995.
Happy Birthday, Mr. Winfield!  Fans here in T.O. and across Canada will always remember your contribution to our first World Series victory.

By the way, Dave Winfield is currently Executive Vice-President and Senior Advisor with the San Diego Padres.  He is also a baseball analyst for ESPN.