Reflections and quotes on Earth Day 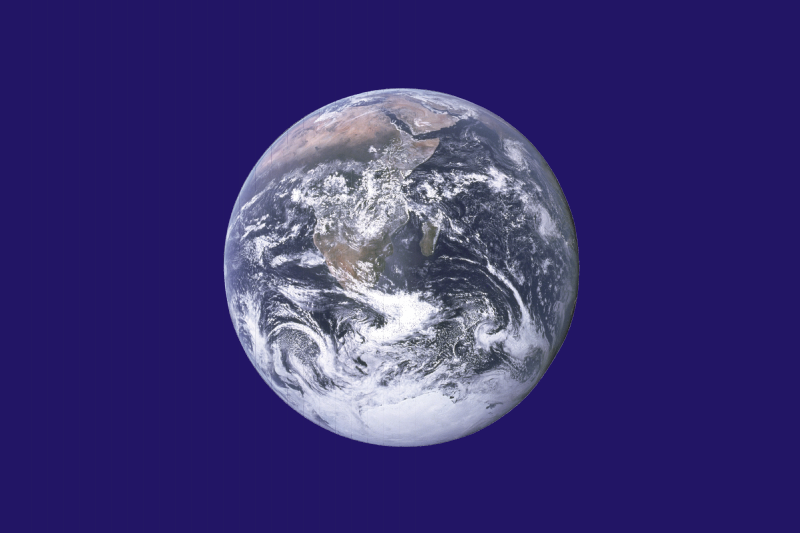 The earth does not argue,
Is not pathetic, has no arrangements,
Does not scream, haste, persuade,
threaten, promise,
Makes no discrimination, has no
conceivable failures,
Closes nothing, refuses nothing,
shuts none out.


Today, April 22nd, marks the 45th annual celebration of Earth Day.  Shown in the above photo is the Earth Day Flag.  It was designed by the late John McConnell.  McConnell, an American humanitarian and peace activist, died on October 20, 2012.  At a UNESCO Conference in San Francisco in 1969, he proposed a day to honour the Earth and the notion of peace.  It was to be celebrated on Mach 21st, the spring equinox in the Northern Hemisphere.

Below is a photo of him in front of his home in Denver, Colorado with his flag. 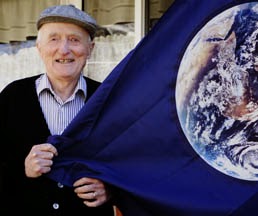 A second Earth Day was later established by the late United States Senator Gaylord Nelson (1916-2005), a Wisonsin Democrat.  It was first held on April 22, 1970.  Below is a photo of Nelson addressing a crowd on the first Earth Day. 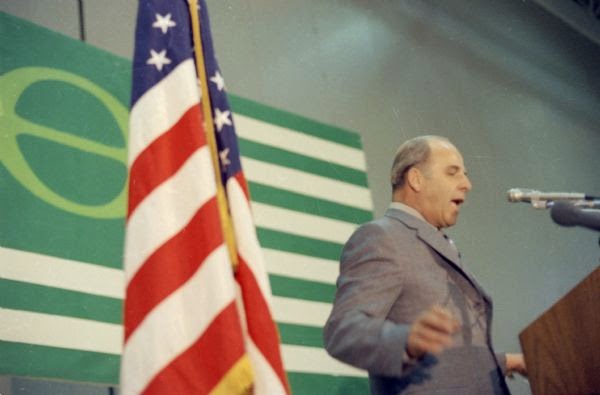 REFLECTIONS AND QUOTES ON EARTH DAY 2015

Here is your country.  Cherish these natural wonders, cherish the natural resources, cherish history and romance as a sacred heritage, for your children and your children's children.  Do not let selfish men or greedy interests skin your country of its beauty or its romance. 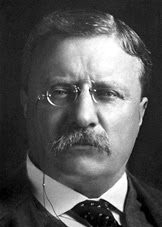 Theodore  Roosevelt was an ardent conservationist.  According to the U.S. National Museum of Forest Service History, he helped establish five national parks, 18 national monuments. and 150 National Forests.  His gift to America was a tremendous legacy of 230 million acres of wildlife habitat conserved (84,000 acres for each day of his presidency).

In his "Confession of Faith Speech at the Progressive National Convention in Chicago, Illinois (August 6, 1912), Roosevelt declared, "There can be no greater issue than that of conservation in this country." How many candidates for the 2016 Republican nomination for president would speak those words, or anything similar today?  Would Ted Cruz?  How about Mario Rubio?  Are you kidding! Republicans are more interested in denying the scientific evidence of climate change or playing down its importance.  There are far too many echoes of Sarah Palin's infamous "Drill, baby, drill!"

Here is what Roosevelt told the children of the United States in his "Arbor Day Message" on April 15, 1907:

We of an older generation can get along with what we have, though with growing hardship; but in your full manhood and womanhood you will want what nature once so bountifully supplied and man so thoughtlessly destroyed; and because of that want you will reproach us, not for what we have used, but for what we have wasted...So any nation which in its youth lives only for the day, reaps without sowing, and consumes without husbanding, must expect the penalty of the prodigal whose labor could with difficulty find him the bare means of life.

Have right-wing evangelicals forgotten the biblical concept of human stewardship over the earth's resources.  Here is a quote they'd do well to read often.

The Earth is the Lord's and all that is in it, the world, and those who live in it

It's not just American Tea Party types who deserve criticism.  As a Canadian, I am thoroughly ashamed of our current government's egregious record on the environment.  Prime Minister Stephen Harper has considerably reduced environmental regulations and muzzled the voices of environmental scientists.  Recently, a former Harper government appointee, Mark Jaccard, used a keynote speech in Washington, D.C. to criticize Canada's Conservative government's inaction on climate change. Jaccard, an environmental economist and a professor at Simon Fraser University in British Columbia, called Canada a "rogue state" on the environment.  He implored the United States to block Keystone XL, the controversial Alberta-U.S, oil pipeline. 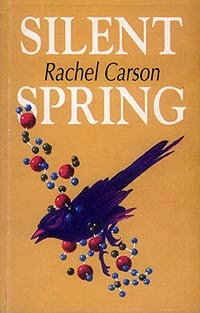 In her groundbreaking 1962 book, Silent Spring, American author Rachel Carson (1907-1964) wrote these compelling words about the beauty and rhythm of earth and nature.

Those who contemplate the beauty of the earth find reserves of strength that will endure as long as life lasts. There is something infinitely healing in the repeated refrains of nature -- the assurance that dawn comes after night, and spring after winter.


Carson, a marine biologist, was alarmed about the use of synthetic pesticides.  In Silent Spring, she issued a timely warning about the consequences of neglecting our environment:

We stand now where two roads diverge. But unlike the roads in Robert Frost's familiar poem, they are not equally fair. The road we have long been traveling is deceptively easy, a smooth superhighway on which we progress with great speed, but at its end lies disaster. The other fork of the road - he one less traveled by - offers our last, our only chance to reach a destination that assures the preservation of the earth.


The last word on this Earth Day comes from the American poet and novelist, Wendell Berry. Berry born in 1934, is also a Kentucky farmer and an environmental activist. 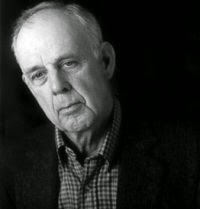 The earth is what we all have in common.

- Wendell Berry
From The Unsettling of America: Culture and Agriculture  [1977]