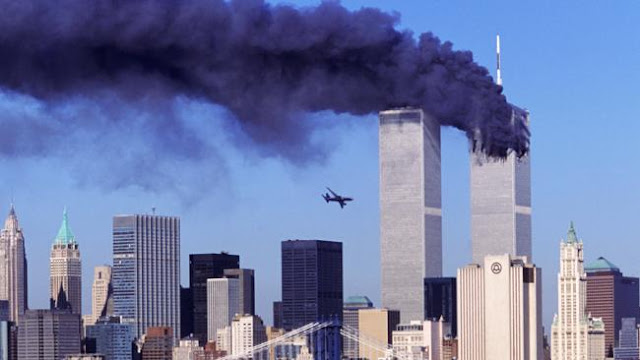 The world marks a terrible anniversary today. 15 years have passed since the terrorist attacks of 9/11 and life has never been the same.  We face stiff security and regulations around the world at airports and baseball parks. The days when I, as a Canadian, could enter the United States with just a birth certificate are long gone.  Subways and other public places in major cities are vulnerable to terrorist attacks.

I will never ever forget the details of that dreadful day, 15 year ago.  I will always remember the horror and the courage displayed.  Both are stamped indelibly in my mind.  As I prepared to go to work at the Toronto Star newspaper library that fateful morning, I turned on the television to catch the news headlines.  With a deeply sombre voice, an announcer reported that a plane had crashed into one of the twin towers of the World Trade Center in Manhattan.  The crash was replayed over and over again.  At first, I thought it was a terrible accident, that a pilot had miscalculated and lost control of the plane.  Such was not the case.  There was more to it, something much more sinister.

Before I went out the door, I was informed that the second tower had also been hit and that there had been terrorist attacks elsewhere.  I was shocked and astonished. As I stepped outside to wait for my bus, I couldn't help noticing what a picture perfect day it was.  There was nary a cloud in the bright blue sky.  My head was spinning.  What was going on?  Was this Armageddon?

When I arrived at work I immediately noticed a flurry of activity in the library and in the newsroom. The little television in the library was turned on to CNN.  I was shocked to see that both towers had completely toppled.  Reporters were scurrying around the library searching for road maps and routes from Toronto to New York City.  They were determined to get there to cover the story.

I sat down at my computer to begin archiving the day's paper, as I was assigned to do.  My colleagues  at the reference desk were besieged with requests.  Our manager at the time walked over to help out at the reference desk.  As she passed me, she asked, "How can you work at a time like this?"  "It has to be done," I responded calmly, although my head was still spinning.

After the Japanese attack on Pearl Harbor, Franklin D. Roosevelt described December 7, 1941 as "a date which will live infamy."    September 11, 2001, 60 years later, is the second "date which will live in infamy,"  The Third Reich and Imperial Japan were eventually defeated, but terrorism still rears its ugly head.  Sadly, radicalism and anti-Western hatred have been energized by the U.S. military response to 9/11 - America's ill-fated and ill-conceived invasion of Iraq.  Understandably, America was literally and figuratively wounded on 9/11..  Americans wanted to lash out at someone or something.  Unfortunately, invading Iraq was the wrong choice.  It was a tragic choice.  Not a single 9/11 terrorist was from Iraq.   All of the 19 hijackers were affiliated with al-Quaeda.  15 were Saudi Arabian citizens.  Of the remaining four, two hailed from the United Arab Emirates, one was from Egypt and one was from Lebanon.

With the misguided belief that Iraq held weapons of mass destruction, the United States, under President George W. Bush, invaded Iraq in 2003.  Many innocent people, the vast majority of them Muslims, were killed.  It was a terrible loss of human life and Iraqi's wondered why they were being killed and punished in retaliation for 9/11.  In short the invasion of Iraq was unconscionable in human cost.  Bush's folly also cost the United States greatly in financial terms.  Here are some statistics according to the Costs of War Project by the Watson Institute for International Studies at Brown University in Providence, Rhode Island: According to the 2013 report, the U.S. war in Iraq killed at least 134,000 Iraqi citizens might have contributed to the deaths of quadruple that number.  When journalists, humanitarian workers and insurgents were added to the total, the wars death toll increased to an estimated 176.000 - 189,000.  The war cost a whopping $1.7 trillion with an extra $490 billion in benefits owed to war veterans, a number which is still growing and could reach $6 trillion over the next forty years (with interest factored in).

When I look at those numbers, I want to weep.  The waste is human terms and financial terms is staggering.  It makes me think of what Donald Trump's folly might cost in terms of lives and money if he should become President of the United States.