Whatever happened to Donovan? 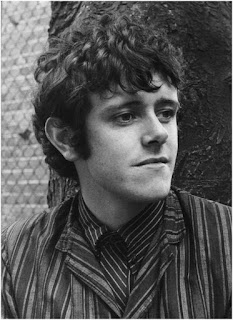 "It wasn’t all just fun and games, the 1960s, but I have a light touch. The songs I write and sing try to say important things with a lightness."

"I think of myself as a poet. I grew up with poetic influences – what I know from my background is the bardic poetry, which came down through oral tradition. And Scottish folk music, which was liberating, humorous, real. What happened in the 60s gave a new voice to that tradition: the bohemians and the eccentrics, people like me and George Harrison going through the old bardic books. We infused it with the spirit of that time."

During the 1960s, Donovan was a gentle troubadour with an impressive array of hit songs.  This Scottish singer, songwriter and guitarist and harmonica player was the consummate flower child. He embodied the hippie era with a unique musical style that combined folk, pop, jazz, psychedelia and calypso.

Donovan Phillips Leitch was born on May 10, 1946 in an area of Glasgow, Scotland known as Maryhlll.   He grew up in a Glasgow tenement, the son of  Donald Leitch, an engineer, and Winifred (née Phillips) Leitch, a factory worker.  He is of Scottish and Irish descent (his grandmothers were Irish).  In 2016, he told The Guardian that his sense of humour comes from his Irish side.  "We get something from the music halls," he stated.  "There's that Beatles line: 'For the benefit of Mr. Kite, there will be a show tonight . . .'"

As a child in Glasgow, Donovan contracted polio and was left with a limp.. The Leitch family eventually moved to the town of Hatfield , Hertfordshire, England.  Their home had always been filled with a love of music and Donovan learned how to play the guitar at the age of 14.  He briefly attended an art school, but dropped out to go on the road.

Donovan Leitch arrived on the British music scene in early 1965 with his performances on the U.K. rock/pop TV series Ready Steady Go!  His first appearance on the show was due to Brian Jones, founder of The Rolling Stones.  Brian walked into one of Donovan's demo recording sessions in London and  later told Ready Steady Go! that if they didn't have Donovan on their show, they'd be sorry.

As a result, Donovan landed his first television performance before he had even released a single.  In those days, he came across as Bob Dylan-type folksinger and he enjoyed early success with hits in the United Kingdom - "Catch the Wind," "Colours," and Buffy Sainte-Marie's "Universal Soldier."  His voice was soft and expressive and soulful.

The mid-1960s were Donovan's heyday.  He ended up hanging out with such luminaries as Joan Baez and Bob Dylan himself.  It was Dylan who introduced Donovan to the Beatles in 1965.

Epic Records released Donovan's hit single "Mellow Yellow" on October 24, 1966.  Donovan also scored big with "Sunshine Superman" (1967) and "Hurdy Gurdy Man" (1968).  His lyrics were obscure and thought to include drug references.  In 1966, he became the first British pop singer to be arrested for possession of marijuana.

In February of 1968, Donovan travelled with The Beatles to Rishikesh in northern India to attend a training session in Transcendental Meditation, held at the ashram of Maharishi Mahesh Yogi.  It was during this famous visit to India that Donovan taught John Lennon the finger picking guitar style he used on The White Album.  As Donovan told David Marchese for a 2016 article in Vulture, he and Lennon were kindred spirits:

"John asked me to teach him some new chord structures and how to do finger-style guitar.  You know, I knew in 1965 when we met that he and I were similar.  John and Paul (McCartney) are Liverpool Irish, and that means we're both in the ancient Gaelic traditions of bards and shamans and troubadours, poets of the very highest order, those with the goal of delivering peace and order.  So we had a similar outlook."

Other notables in the Beatles' Rishikesh entourage were George Harrison's first wife, Pattie Boyd, was as well as Pattie's  younger sister, former British model Jenny Boyd.  In March of 1968, Donovan released his hit single, "Jennifer Juniper," a song inspired by Jenny.  Although she and Donovan were never a couple, he admitted to having a crush on her.

Donovan performed on The Smothers Brothers Hour in 1968 and 1969.  On the November 17, 1968 show, he sang "Lalena" and "Happiness Runs."  Other guests on that 1968 show included Dion, Jennifer Warnes and The Committee.  There was also a cameo by George Harrison encouraging the controversial Smothers Brothers to continue trying to tell the truth to America.

Below is a photo of Donovan performing live on The Smothers Brothers Hour on March 23, 1969.  He sang "Giggle in A Bubbly Bath," "Angels Thoughts," "Little White Window," "To Love Me," and "Antlantis."  Other guests on that show included Peter, Paul and Mary and Mort Sahl. 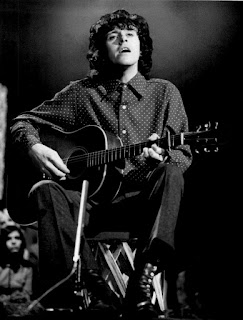 In 1969, two months into a world tour, Donovan experienced what he describes as "a dark night of the soul."  Everything had caught up to him, especially the fame and the loss of his private life.  He looked into the mirror of his bedroom in the Tokyo Hilton and said to himself, "I've done it.  Why should I continue?"  He felt that he had accomplished his mission, so he abandoned the tour and returned to his cottage in Hertfordshire.

During the 1970 and 1980s, Donovan continued to compose and perform, but his hippie style was derided by critics, especially after the rise in popularity of punk rock.  However, his career receive a boost in the 1990s with the emergence of the British rave scene.

From 1966 to 1970, Donovan had a relationship with American model Enid Karl.  They had two children together, a son named Donovan Leitch (born 1967) and a daughter named Iona Skye (born 1970).  The children were raised in the United States by their mother.

In 1969, after abandoning his world tour, Donovan ran into Linda Lawrence, ex-girlfriend of Brian Jones.  He had first met Linda in 1965, while performing on Ready Steady Go!.  On October 2, 1970, Donovan married Linda (born 1947) in Windsor, Berkshire, England).  The couple wed, at Windsor register office and honeymooned in the Caribbean.  Linda was the inspiration for his song "Sunshine Superman."  In a 2016 Guardian interview, he stated, "I wrote 'Sunshine Superman' knowing she'd hear the lyrics [in L.A.} and realise I still loved her.  I sang: 'It'll take some time, I know it, but in a while/You're gonna be mine.  I know it/ We'll do it in style.'"

Donovan and Linda settled in Ireland, where they raised Linda's son, Julian, by Brian Jones (Jones was found dead in a swimming pool on July 3, 1969 at the age of 27).  Donovan adopted Julian (born July 23,1964), who took "Leitch" as his last name.  Linda  and Donovan also had two children together, Astella and Oriole.

Below is a 1970 photo of Donovan, Linda and Julian at the BathFestival. 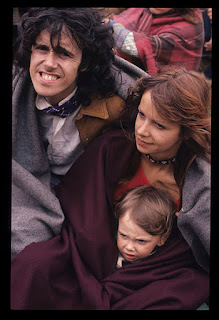 Now craggy-faced and sporting wild grey hair, Donovan is still living in Ireland, He recently recorded an album dedicated to teenage environmental activist Greta Thunberg.  The album is called Eco-Song and he recorded it with his wife, Linda.  It is a collection of 21 songs composed and sung by Donovan throughout his career that have an environmental theme.  He and Linda intend to turn it into a "stage opera."  They want to take it to schools and universities and have young people perform it.  Before the COViD-19 outbreak, Donovan was planning to take Eco-Song on tour; but for now, it has only been released as a standalone CD. 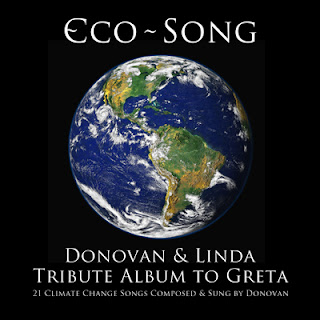 * Donovan contributed some lines of lyrics for two classic Beatles songs.  It was he who came up with the line "Sky of blue and sea of green" for  "Yellow Submarine."  When John Lennon told Donovan that he wanted to write a song about his mother, Donovan asked him where he imagined himself when he thought of the song.  John replied that he thought of himself at the beach holding his mother's hand.  Donovan then suggested "Seashell eyes/windy smile,"  The song turned out to be "Julia."

* Donovan has written an autobiography entitled The Hurdy Gurdy Man.  It was published in 2005. 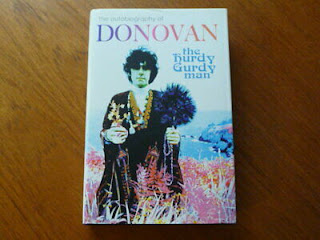 *Below is December 19, 2018 photo of Donovan as he appeared on Britain's ITV on a show hosted by Lorraine Kelly. 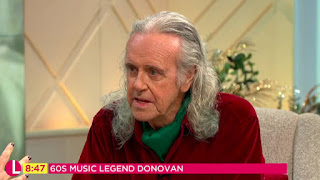 SOURCES: The Guardian. "'The songs try to say important things with lighness: The singer, who is about to be 70, on bardic poetry, a drugs sting and 'Mellow Yellow' sung by kids," by Ed Vulliamy, April 23, 2016; The Guardian, "Donovan: 'Can you believe the Beatles and I were paying 96% tax': The 60s folk troubadour is on an environmental mission to Greta Thunberg. He discusses love, success, Brian Jones - and how drugs became big business," by Zoe Williams, April 9, 2020; The Guardian, "No name left undropped," by Dorian Lynskey, May 24, 2005; Vulture; "Donovan on the Time He Helped Write a Beatles Classic and Then Watched John Lennon Chase a Paparazzo Into the Jungle," by Donovan as told to David Marchese, November 9, 2016; Wikipedia

Posted by Joanne at 4:04 PM No comments: