Children of Dieppe: A novel by Joanne Madden 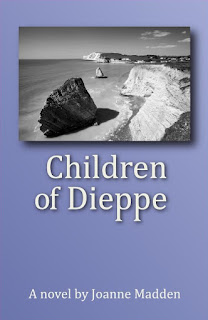 Readers, if you are looking for a good read during this awful pandemic, I would like to remind you that my novel Children of Dieppe is available as an ebook.  It is the story of Denise Nair, whose father, a Canadian soldier, lost his life during the tragic raid on Dieppe, France in 1942.  The repercussions of that raid are life changing for Denise's family, friends and acquaintances, including the mysterious Gordon Sloane and the troubled Rosemary Tillis.  This sweeping novel spans a time period from World War II to the 21st.century.  It is about family, friendship, the aftermath of war and the effects of mental illness.

I would really like some feedback from anyone who reads Children of Dieppe.   I would be very happy to hear from you.

Here is the link to my ebook.

Readers, I would like to thank you for any support you have given me over the years just by reading Number 16.  I am truly grateful and I appreciate you.

Posted by Joanne at 9:02 PM No comments: