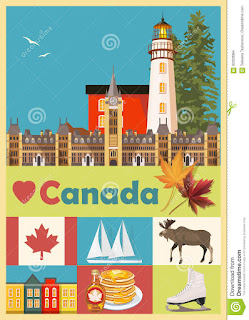 Why is it so expensive and onerous to travel within Canada?.  It should be much easier for Canadians to explore Canada and enjoy the beauty of their own country.  From sea to shining sea, the Canadian landscape is a panoramic spectacle, but it's often less costly to hop on a flight to Europe than to to fly to other Canadian cities and provinces.

Furthermore, why doesn't our country have a network of high-speed trains.  After all, Canada was built on the promise of a railroad from east to west.  The late author/historian Pierre Berton referred to it as our "National Dream."  So, it is ironic that there is a lack of modern high-speed rail service in this country.  We are in dire need of a high speed train service like the ones overseas, especially in areas such as the Quebec City-Windsor Corridor and in Western Canada, particularly between Calgary and Edmonton.

Unfortunately, plans for a high-speed train from Toronto to Windsor were cancelled by Premier Doug Ford's government.  The project had been approved by Kathleen Wynne's Liberal government in 2018 with an initial budget of $11 billion dollars.  By the year 2025, the trains would have run along the 401 corridor from the GTA to London, Ontario in just two hours, at speeds of up to 250 km/hr.  Then, along came Ford (Groan!), whose budget cuts deprived the people of Southwestern Ontario and the Toronto area of the convenience of using high-speed rail for family visits and commuting to work..  As a result of this penny-pinching foolishness, Ontarians were robbed of benefits of decreased travel time, the creation of new economic opportunities and the reduction of congestion and greenhouse gases.  The service along the Toronto-Windsor corridor would have attracted visitors and business to a growing region with a population of 7 million.

It hasn't always been this way.  From October 31, 1965 until October 29, 1978 (about 13 years), the Canadian National Railway (CN)) provided express passenger train service in the Quebec City-Windsor Corridor.   The brand name for the service was Rapido.  It began with a Montreal-Toronto route, which was extended to Montreal-Quebec City and later to Toronto-Windsor, Toronto-Sarnia, Toronto-Ottawa and Montreal-Ottawa.  The service ended when CN transferred its passenger service to a government-owned company, Via Rail Canada.

On that Halloween day in 1965.the brand new Rapido, rolled out with much fanfare  Every seat was filled on the inaugural run for what was advertised as North America's fastest inter-city passenger express service.  CN promoted the service with the slogan "From downtown to downtown in just four hours and 59 minutes."  Travel time was decreased from the Toronto-Montreal route by one hour and 16 minutes.

In a CBC radio interview, Rapido conductor Harold Watkins proudly declared, "There's no comparison between the Rapido and our older trains.  The older trains are just like the horse and buggy.  They've had their day."  In a November 8, 1965 article in The Globe and Mail, Bruce West gushed over the Rapido.  He wrote: "The Rapido is more comfortable than most airliners and with a running time of 4 hours and 59 minutes between Canada's largest cities, it doesn't fall a great deal behind the downtown-to-down elapsed time of traveling by air.  From now on, I'm quite sure, the tortoise is going to give the high-flying hare a good run for its money."

In 1965, the price of a one-way coach ticket on the Rapido was $8.  On Fridays and Sundays, the fare jumped to $9.50.  The cost of parlour car tickets ranged from $15 to $19 with a meal included.  "Bistro" cars were sometimes featured in Rapido service trains.  These cars were festooned with red bulbs.  There was piano-based entertainment and alcoholic beverages were served.

Below is a photo of CN Rapido service at Pickering, Ontario in 1968.


So, what went wrong?  Why was high-speed railway travel abandoned in Canada?  Why did we revert to what conductor Harold Watkins compared to a horse and buggy?  Not surprisingly, it was a matter of economics.  CN tried to maintain its passenger service but continued to lose money during the 1970s.

During the 1974 federal election campaign, then-prime minister Pierre Elliott Trudeau promised a Canadian version of Amtrak, so that passenger rail could be saved from the competitive juggernaut of cars and airplanes.  That was the reasoning behind the formation of Via Rail Canada, first as a division of CN and later as an independent Crown Corporation.  As it turned out, Trudeau's Liberal party was reduced from a majority to a minority in 1974 and Via failed to live up to his lofty expectations.

With such a huge country geographically, it's imperative that Canadians become more familiar with regions other than their own.  High-speed rail is a fixture throughout Europe, Japan and the east coast of the United States.  Why is it that Canada is the only G7 country without a high speed rail system?  Japan has its Shinkansen network, first built in 1964, while France boasts its extensive intercity state-owned Train à Grande Vitesse (TGV).

Below is a 2014 photo of a TGV train leaving Nice, France.


A 2017 article in VICE magazine was headlined "High-Speed Rail is One of Canada's Biggest Failures."  Anthony Perl, a professor of urban studies and political science at Simon Fraser University in British Columbia, called Canada "the word's leading laggard when it comes to high-speed rail."  "Even Kazakhstan, I don't mean to pick on them," he said, "has a very successful high-speed rail service."

It seems that governments in Canada are too afraid to take on the costs and the debts incurred.  Canadians are paying the price for this short-sightedness and cowardliness.  Ryan Katz, a political science professor at the University of Ottawa, told VICE: "When governments in the '60s and '70s were more likely to see an expense like that as a big public benefit that was tied into the national interest or other types of modernist objectives, those costs seem justifiable."

It's a pity that Canada has not invested in high-speed trains.  They are more environment-friendly than planes and more economical.  Furthermore, much of the the hassle of airport security can be avoided by travelling by train,.  All aboard!

* CN introduced a Turbo train between Toronto and Montreal in 1968.  It was given that name because it was power-driven by a jet turbo.  On its maiden run, however, the train crashed into a truck near Kiingston, Ontario.  It continually experienced technical problems and was cancelled in 1982.  The Turbo train was expected to reach speeds of 200 km/hr as compared to the Rapido's top speed of
143 k/hr.

* In the United States, the state of California is well on its way to having a clean and green high-speed railway network.  The publicly funded California High-Speed Rail (CAHSR or CHSR) is under construction.  It was established by the California State Legislature and approved by voters in 2008.
Construction began in 2015 after a groundbreaking ceremony in Fresno.

* China has built about 20,000 kilometres of high-speed tracks.


SOURCES:  VICE, "High-Speed Rail Is One of Canada's Biggest Failures,' by James Wilt, June 26, 2017; CBC Archives, "1965: All aboard the Rapido!"; blogTO, "High speed train between Toronto and Windsor has been cancelled," by Lauren O'Neil; Wikipedia