Why the U.S. Republican Party is on the wrong side of history

What has happened to the Republican Party of the United States is sad and tragic.  The party of Abraham Lincoln, Theodore Roosevelt and Dwight D. Eisenhower no longer exists in its current form.  In fact, the Republican Party has strayed so far to the right and away from the rule of law that it isn't even the party of Richard Nixon, Gerald Ford, Ronald Reagan, George H.W. Bush and George W. Bush anymore.  Unfortunately, the party is now controlled by Donald Trump and his cult followers.  It has been hijacked.  It no longer stands for any true ideals.  It has abandoned any real principles and has become whatever Trump wants it to be.  Like a mob boss, he rules the rules the roost and demands absolute loyalty.

First, a little history about the Republican Party.  According to Christopher Klein, a frequent contributor to History.com, it was formed in 1854 by former Whig Party members to prevent the expansion of slavery into western territories.  It acquired  the "nickname GOP" (Grand Old Party).around  1870, when newspapers began referring to the Republican Party as both "the grand old party" and the "gallant old party" in recognition of its contribution in preserving the Union during the Civil War.  In 1874, the Republican Party of Minnesota endorsed a platform that it said "guarantees that the grand old party that saved the country is still true to the principles that gave it birth."

Alas, if Abraham Lincoln and Theodore Roosevelt could see what has become of their party, they would weep bitterly.  It is anything but true to the principle that gave it birth.  Lincoln and Roosevelt could never have envisioned that their party would be controlled by a twice-impeached 74 year-old white supremacist, misogynist and pathological liar.  They could never have imagined that an American president would encourage an insurrection to prevent the certification of a presidential election. On January 6, 2021, Trump and his band of far right domestic terrorists, white supremacists and neo-Nazis almost succeeded in overturning the legitimate outcome of the 2020 presidential election.

Donald Trump will never acknowledge that he lost the 2020 election to Joe Biden.  As his estranged niece, Mary Trump, has pointed out, losing means death to him.  He continues to peddle his conspiracy theories and lies, and millions of American believe him.   He acts as if he is a viable candidate for president in 2024, although it is doubtful that he will ever run again.  Still, many of  the former president's followers will be duped into donating their hard-earned money to him.

Let's be clear.  Donald Trump should not be permitted to run for office in the United States ever again.  He will spend years in court, facing multiple criminal and civil charges.  Sooner of later, he will be held accountable for his actions.  He is not above the law and he no longer has the protection of the American presidency.  He is Citizen Donald J. Trump and he must be held accountable for his actions.  Otherwise other authoritarian leaders will attempt to get away with destroying American democracy.  Trump is not invincible.  Keep in mind that mobster Al Capon was finally convicted of tax evasion and that Napoleon was defeated in the Battle of Waterloo.

Donald Trump and his sycophants, such as Ted Cruz, Lindsey Graham and the woeful Josh Hawley, should take note of what has just happened to the former president of France, Nicolas Sarkozy.  Sarkozy, who served as president from May 2007 to May 2012, has just been convicted of corruption.  He was sentenced to a year in prison.

The Trump Party is out of touch with modern America.  History and demographics are not on its side.  The population of the United States is becoming increasingly urban and more diversified.  The environment matters.  Coal, oil and other fossil fuels are dying industries.  They will be replaced by renewable energy, green jobs and electric cars.  The lily white world of Leave it to Beaver is long gone and the South will never rise again.

This is not to say that the concerns of rural, white voters don't matter and should not be addressed.  It simply means that the world has changed and that a conservative movement, if it is to succeed,  has to become more inclusive, more concerned about the environment and more appealing to racial minorities, immigrants and younger voters.

As it is presently constituted, the "Republican" Party cannot win the popular vote in a presidential election.  It can only depend on an archaic electoral college system to elect a "Republican" president.   It has to attract voters, not prevent them from voting.  The Trump Party has been reduced to voter suppression and gerrymandering in order to win elections.  It is determined to  prevent Blacks and Latinos from exercising their franchise.

The party of Lincoln and Theodore Roosevelt has been lost.  It hasn't been "grand" for a while.  It is just old and out-of-step.  That is why moderate conservatives who believe in democracy and the rule of law should start a new party.  It should be a party that is more open and more internationalist.  It should be willing to work side by side with America's traditional allies and support the United Nations and its agencies such as the World Health Organization (WHO).  Remember that Wendell Wilkie, a corporate executive and Republican candidate for president in 1940, published a manifesto in 1943.called One World, which advocates an end to colonialism and supports World Federalism and equality for non-whites in the United States.

The American conservative movement needs to be refreshed and rebuilt.  Like the Whig Party, the "Republican Party" of Donald Trump and Mitch McConnell should be confined to the dust bin of history.  Otherwise, Trumpism and domestic terrorism will continue to threaten democracy in the United States.

SOURCE:  History.com, "Why Is the Republican Party Known as the GOP?" by Christopher Klein

Attention Canada!! Don't throw this out. It's not junk mail. 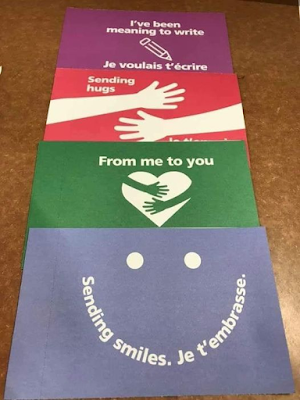 Hey Canada, if you've received this in the mail, don't throw it out.  I almost discarded it myself until I looked at it more carefully.  It's definitely not junk mail.  Although Canada Post is sending it out as a flyer, it's actually a postage paid post card.  Please take the time to send a note to someone who is alone or isolated during this pandemic.  Just write a message and place it in a mail box. It won't cost you anything and it's a win-win situation.  You will cheer someone up and you will feel better.  In these terrible times, some good old fashioned mail can work wonders.