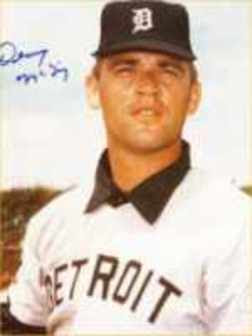 When you can do it out there between the white lines, you can live any way you want.


Let's enjoy another baseball memory.  Let's return to Tiger Stadium on September 14, 1968.  It was 43 years ago today that Denny McLain won his 30th game of the season for the Detroit Tigers.  There were 44,087 fans in attendance as the 24-year-old right-hander became the first major league pitcher in 34 years to achieve 30 wins.  In the crowd was Dizzy Dean, the man who had accomplished the same feat for the St. Louis Cardinals back in 1934.

Denny McLain's 30th win was not an easy one.  There was high drama in the Motor City that day as the Detroit Tigers came from behind to defeat the Oakland A's by a score of 5-4.  A game-winning run by Willie Horton in the bottom of the ninth inning sealed the comeback victory for the Tigers.  In the midst of the celebratory mob scene, there was a poignant moment as Dizzy Dean embraced a triumphant McLain.

Denny McLain went on to achieve a remarkable 31 victories that year against only 6 losses.  1968 was truly his dream season.  Unfortunately, it wasn't long after that magical season that everything went downhill for the talented pitcher.  In fact, his life turned into a nightmare and he found himself in prison.

Nothing, however, can take Denny's 1968 achievements away from him.  McLain had an amazing record that year and he took the baseball world by storm.  In addition to his stellar 31-6 season, he boasted an ERA of 1.96.  He was the league leader in victories, winning percentage (8.38), complete games (28) and innings pitched (336).  Not too shabby, eh?  How many pitchers throw 28 complete games in a season anymore?

The awards amd accolades just kept on coming for Denny McClain in 1968.  He was selected as American League All-Star.  He won the Cy Young Award and he was chosen as the Most Valuable Player in the American League.  His Detroit Tigers went on to win the October Classic and he received a World Series ring. Oh yes, and if that weren't enough, the Associated Press named him male athlete of the year.  At the age of 24, Denny McLean was sitting on top of the world. 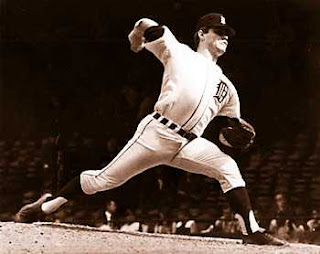 Dennis Dale "Denny" McLain was born on March 29, 1944 in Chicago, Illinois.  He attended Mount Carmel High School in Chicago and was initially signed by the Chicago White Sox.  The Detroit Tigers selected him off waivers and he became a major leaguer in 1963 at 19 years old.  In 1965, his breakthrough season, Denny posted a 2.61 ERA and a 16-6 record.  Although it was practically impossible to top his extraordinary 1968 season, McLain continued to excel in 1969.  He won another Cy Young Award which he shared with lefty Mike Cuellar of the Baltimore Orioles.  Both pitchers had 24 wins.

1970 was the year that everything began to unravel in the life and career of Denny McClain.  In February of that year, Sports Illustrated featured McClain on its cover with the blaring headline "Denny McLain and the Mob: Baseball's Big Scandal."  His problems began to mount after he found himself the subject of an investigation by a Detroit grand jury for possible involvement in gambling activity.  When he admitted to investing in a bookmaking operation, Commissioner Bowie Kuhn suspended him indefinitely on April 1, 1970.  Although the suspension was removed on July 1, 1970, McClain's woes continued as his conduct became quite bizarre.

The Detroit Tigers suspended Denny twice during the 1970 season for incidents such as pouring buckets of water on a couple of Detroit sportswriters and carrying a gun on a commercial airliner.  He only played 14 games that season posting a record of 3 wins, 5 losses and a 4.63 ERA.  During the 1970 World Series, McLain was traded to the Washington Senators, a trade which Bowie Kuhn later described in his autobiography Hardball: The Education of a Baseball Commissioner as "a foolish gamble" on the part of the Senators.

Subsequent events proved Kuhn's assessment of the trade to be quite correct.  Denny spent one season with the Washington Senators and it was a disaster.  He was in continual conflict with manager Ted Williams who had objected to the trade and did not approve of McLain's lifestyle.  Denny was not pleased with Williams either.  In fact, he and four other Washington players formed the "Underminers Club" and dedicated themselves to getting Williams fired.

On the mound, Denny McClain's 1971 season was absolutely miserable.  Plagued by a sore arm, he became incapable of throwing fastballs.  He recorded a whopping 22 losses to go along with his 10 wins.  In two years, Denny had gone from leading the American League in wins to leading it in losses.  Little wonder he was traded to the Oakland A's after the 1971 season for journeyman pitcher Jim Panther and prospect Don Stanhouse.  Stanhouse would go on to have success as a closer for the Baltimore Orioles in the late 1970s.

Denny McClain's major league career came to an end in 1972.  The two-time Cy Young winner was traded to the Atlanta Braves after five unimpressive starts for the Oakland A's.  He made his final appearance in the big leagues on September 12, 1972 against the Cincinnati Reds.  He was sent into a tie game in the ninth inning and allowed three runs without retiring a batter.  How's this for irony?  The last batter McLain faced in his career was Pete Rose who also became embroiled in a huge gambling scandal.

The Atlanta Braves released Denny McLain during spring training in 1973.  After a couple of stints in the minors in Des Moines and Shreveport, Denny decided to retire from baseball.  He was only 29 years old.  It is interesting to note that he came out of retirement to play a season in the Intercounty Baseball League here in Canada.  In 1974, McLain was a pitcher, shortstop, first baseman and catcher for the London Majors at Labatt Memorial Park in London, Ontario.  Due to his arm problems, he only pitched nine innings for the Majors.

During his post-baseball years, Denny McClain's downslide continued.  In 1985, he was sentenced to 23 year in prison for drug trafficking (cocaine), extortion and racketeering.  He served 30 months before winning an appeal.  His conviction was overturned and he was released.  In the 1980s and early 1990s, between his incarcerations and his rehabilitation programs, McClain made appearances on various radio and television shows in the Detroit area.

Denny and his family suffered a tragedy on March 20, 1992 when his eldest daughter, Kristin, 26, lost her life in a car accident involving an impaired driver.  She had been living in Florida and was moving back to Michigan when she was killed near the home of her parents.  After his daughter's death, McLain and some partners purchased the Peet Packing Company, a meat packing plant, in the town of Chesaning, Michigan.  The company went bankrupt and in 1996 Denny was convicted on charges of embezzlement, mail fraud and conspiracy in connection with theft from the employee's pension fund.  McLain was jailed for six years although he maintained that he was unaware of the shady dealings.

In 2007, Denny McLain published his autobiography, appropriately titled I Told You I Wasn't Perfect.  The book was co-written by veteran Detroit sportscaster and author Eli Zaret.  Now 67 years old, McLean lives in Pinckney, Michigan with his long-suffering wife Sharon (some sources spell her name Sharyn), the daughter of Hall-of-Fame baseball player, manager and announcer Lou Boudreau.  They couple married on October 5, 1963 and had four children: the late Kristen, Denny Jr., Tim and Michelle.  They divorced in 1998 but later remarried.

Despite his struggles and his personal demons, Denny McClain was a great pitcher.  He had a career record of 131 wins, 2 shutouts and a 3.39 ERA.  He struck out a total of 1,282 hitters.  One can only wonder what he would have achieved without his personal problems and the pain and inflammation of a torn rotator cuff.

* Denny plays the organ and the "Denny McLain Quartet" appeared on The Ed Sullivan Show in 1968, accompanied on the guitar by fellow pitcher and Word Series opponent Bob Gibson. 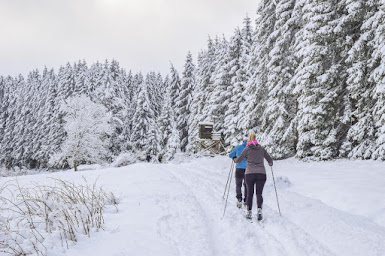