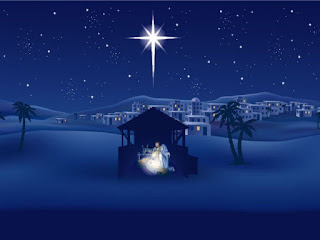 (Arthur Leroy "A.L." Phipps wrote the song "Beautiful Star of Bethlehem" in the Southern Gospel tradition. A.L. was the leader of an American country music group called the Phipps Family.  Tragically, he was brutally murdered during a robbery in his own home on August 30, 1995.)

This Christmas, I look to the Star of Bethlehem for hope and inspiration.  2018 has been a difficult year for our world.  I am truly frightened by the force of political and social upheaval around the globe.  I am also profoundly disturbed by the death of leadership among our most prominent politicians.  It seems that not only young people need to be educated on the history of fascism and the horrors of the Holocaust and the Second World War.

The lack of civil discourse, especially in the United States, is disconcerting to me.  The anger, the extreme political partisanship and the defamation of immigrants are ugly and deplorable.  I am deeply dismayed by the rise of the far right and authoritarian governments as well as by the devastation caused by climate change.  According to scientists, 2019 may be the warmest year on record due to global warming and impacts of El Niño.  The effects of El Niño have been more harsh in recent years and will worsen as temperatures continue to rise, a recent study in the journal Geophysical Research Letters.

My country, Canada, is definitely not immune from these problems, and it is far from perfect.  Despite its blemishes, however,  Canada is a virtual paradise compared to some places in the world.  I have never experienced war and I hope I never will.  It is difficult not to be distraught during this difficult days.  However, despair and apathy are not the answer.  We all need something to focus on, something to steady us during these turbulent times.  That's why I have chosen to focus on the Star of Bethlehem this Christmas and to seek solace as we enter a New Year.

The Star of Bethlehem is only mentioned in the nativity story of the Gospel of Matthew.  Matthew describes it as mysterious star appearing above the place where Jesus was born, which led the wise men from east (the Maji) to the birthplace of the Messiah.  Was the Star of Bethlehem really a star?  That has been the subject of much debate.  Mark L. Kidger, of the European Space Astronomy Centre in Madrid, Spain, says that it was actually a star, an exceptionally bright one called a "nova."  Some believe it was a miracle, while others consider it a fable, a literary device that the apostle Matthew used to express the light of hope brought by the arrival of the Messiah.  For me, it is the light of hope that the Star of Bethlehem represents that matters most.  This Christmas, I will follow that star and it will lead me out of the shadows.