Why the comics are good for you 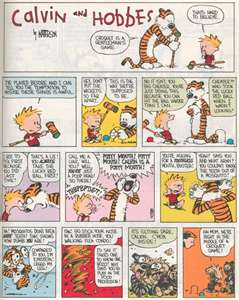 As a lifelong comics aficionado, I can attest to the sheer joy of reading cartoons.  When I pick up the newspaper, I quickly turn to the comics page.  I need my comics fix before I tackle the hard news.  During the worst of times, the comics are guaranteed to boost my morale.  Pure fun and harmless escapism is what they offer.  At the very least, they provide a gentle release from the fast pace and the stress of life in the 21st century.

Since the first successful comic strip, Mutt and Jeff, appeared in the San Francisco Chronicle over a century ago, comics have delighted newspaper readers and made their day a little bit brighter.  Back in November of 1907, Chronicle cartoonist, Bud Fisher, began drawing a daily comic strip titled "Mr. Mutt."  Mutt was tall and gangly and he enjoyed playing the horses.  It wasn't long before Fisher created another character whom he named Mr. Jeff.  Jeff was a diminutive man who wore a top hat and resembled a dishevelled Monopoly Man.

Bud Fisher turned Mutt and Jeff over to another cartoonist named Al Smith in 1932 and Smith drew the strip until two years before it ceased production in 1982.  Although it isn't popular expression anymore, "Mutt and Jeff" is a term used to describe a couple consisting of a tall and a short person: eg. "The Mutt and Jeff duo have been together for ten years."

﻿﻿
﻿﻿
Another expression inspired by a cartoon strip character is a Dagwood Sandwich.  The term originates from the popular long-running cartoon Blondie.  Blondie's husband, Dagwood Bumstead, has a penchant for making huge multi-layered sandwiches with a wide assortment of fillings.  By the way, Blondie was created by American cartoonist Chic Young and first appeared in newspapers on September 8, 1930.  Chic Young drew Blondie until his passing in 1973 after which his son, Dean Young, took over control of the strip.  Dean continues to write Blondie and has collaborated with a number of artists over the years in drawing the strip.

Comics cannot be simply dismissed as mindless entertainment for the masses or bubblegum for the soul. Bill Watterson, author of the comic strip Calvin and Hobbes, put it best when he said, "True, comics are popular art, and yes, I believe their primary obligation is to entertain, but comics go beyond that, and when they do, they move from silliness to significance."

Many immigrants have learned English by reading the funnies and comics have also served as an educational tool for generations of children.  Some cartoonists use their strips as a forum to promote an opinion.  For biting political and social commentary, look no further than Garry Trudeau's Doonesbury.  Doonesbury is so controversial that some newspapers have run it on their opinion pages and, over the years, it has provided a daily chronicle of American politics with its brand of satiric humour.

Some people enjoy comics because there is a certain comfort and a feeling of security about following the adventures and escapades of the same character for years.  Fans really care about their favourite characters and become engrossed in their follies and foibles.  With the notable exception of Canadian cartoonist Lynn Johnson's For Better or For Worse, most comic strip characters remain the same in age and appearance - although some character have undergone an update in hairstyle and clothing over the years.

After almost 111 years in the same comic strip, Blondie's fair tresses have not turned grey.  Dagwood still sports the same unruly haircut and Mr. Dithers is still his boss.  Elmo the paperboy has never grown up.  Neither have the children in the comic strip Family Circus, although their mother's hair has been given a more modern style.

Lynn Johnson took a different approach to her comic strip.  She aged the characters For Better or For Worse in real time.  Johnston, a woman in a male-dominated field, has enjoyed unprecedented success  as female cartoonist.  For Better or For Worse began in 1979 and fans followed the adventures of the Patterson children - Michael, Elizabeth and April - as they grew into adulthood.  There were even deaths in that comic strip.  The family dog, Farley, died heroically after saving April from drowning and the childrens' maternal grandmother passed away.

For Better or For Worse was supposed to end its run on August 31, 2008.  Lynn Johnston, however, announced that instead, she would take the story back almost 30 years to almost its beginning.  The strip would continue with a combination of repeats and new material.

Whatever your age, whatever your economic status, you can enjoy the comics. They are easily accessible to all, not just to an elite.  Devotees are passionate about their favourite cartoons.  They begin their morning by savouring the comics along with their breakfast.  Reading the comics is an integral part of their day and it brings them unconditional happiness.

Comics are affordable and they're not detrimental to your health.  They put a genuine smile on your face and unlike junk food, they are non-fattening and cholesterol free.  For the price of a newspaper or a click on the Internet, they're all yours to enjoy.

I have to admit that I prefer my comics in the traditional newspaper format, although it is difficult to reach a younger generation that way.  In an effort to reach a wider audience, therefore, comic book distributors have made it possible to view comics on mobile devices, tablets and various electronic gizmos.  You can order screen savers and comic strips to view at your leisure, but no matter how and where you read them, comics remain one of life's non-guilty pleasures.  So here's to the funnies!  If you have children, encourage them to read the comics.  Just don't tell them it's good for them.

Why wasn't Jack hired to work in the delicatessen?

Because he couldn't cut the mustard

Congratulations to third baseman Brett Lawrie for blasting his first career grand slam last night here in Toronto.  Lawrie's grand salami let the Blue Jays to an 8-4 victory over the Oakland A's.  The 21-year-old Canadian has not been in the majors long, but has certainly wowed Blue Jays fans.  Boy, was the kid happy!  He was so elated that he could hardly contain himself.  It was great to see and if he remains healthy, he could have a stellar career ahead of him.

My congratulations also to jockey Luis Contreras.  The 25-year-old native of Mexico is wowing fans at Woodbine Racetrack here in Toronto.  Last Sunday (August 10), he rode six horses to victory on a 10-race card.  One of those wins occurred in the third and final jewel of Canada's Triple Crown, the Breeders' Stakes.  Pender Harbour, with Contreras aboard, won the race by a nose.

With that victory, Luis Contreras made Canadian thoroughbred racing history.  He became the first jockey to win all three Canadian Triple Crown events with two horses.  Contreras guided Inglorious to victory in the Queen's Plate on June 26th.  Inglorious did not race in the second jewel of the Triple Crown, the Prince of Wales Stakes at Fort Erie, which Pender Harbour won with Contreras in the saddle.