Today, June 16th, is Bloomsday.  On this day in 1904, the great Irish writer James Joyce had his first outing with his future wife, Nora Barnacle.  Joyce would later choose June 16th as the setting for his literary masterpiece, Ulysses.  The day would come to be known and celebrated throughout the world as "Bloomsday" after Leopold Bloom, the protagonist of Joyce's novel.

The romantic rendezvous between James Joyce and Nora Barnacle on that June day in 1904 was the beginning of a lifelong partnership, although they did not marry until 1931.  The couple had two children and they stayed together for 37 years, until Joyce's death in 1941.  Joyce's father, upon learning of Nora's surname, was said to have remarked, "She'll stick with him.

Nora Barnacle was born in Galway county, Ireland in March of 1884 (the exact date of her birth is uncertain).  Her father, Thomas Barnacle, was a baker in Connemara and her mother, Annie Honoria Healy was a dressmaker.  In 1896, Nora completed her schooling.  She found employment as a doorkeeper and laundress.  That same year Nora's parents separated due to her father's drunkeness.  Nora went to live with her mother and her uncle, Tom Healy, in Galway City.

In 1903, after a falling out with her uncle over her relationship with a Protestant named Willie Mulvagh, Nora moved to Dublin.  She worked as a chambermaid and waitress at Finn's Hotel.  On June 10, 1904, while walking down Nassau Street, she ran into 22-year-old James Joyce.  Joyce, a graduate of University College, Dublin, may have met her before while visiting Finn's Hotel with friends.  On this day, however, the struggling writer asked her for a date.  On June 16th, they walked to the urban village of Ringsend, near Dublin's harbour.  Although they had different personalities and tastes, the two were able to find common ground.

Jim and Nora left Ireland together in October of 1904 and headed for continental Europe. The couple would never live in Ireland again.  Instead they began a pattern of moving back and forth to various European locations.  By 1905, they had set up housekeeping in Trieste, which at that time was part of Austria-Hungary.  James found employment as an English teacher there.

Nora gave birth to a son, Giorgio, in Trieste, on June 27, 1905.  She had a second child, a daughter named Lucia, on July 26, 1907.  Lucia was also born in Trieste.  In 1908, however, Nora suffered a miscarriage and faced a very difficult period of her life.  This put a strain on her relationship with Joyce.

During World War I, James Joyce and his family lived in Zurich.  At the time, the neutral city was a refuge for artists, intellectuals and pacifists such as Joyce.  It was in Zurich that Joyce wrote Ulysses and it is in Zurich that he is buried at the Fluntern Cemetery.

In 1920, James and Nora took up residence in Paris. During the 1920s, Nora wrote a series of letters to her sister Kathleen that were critical of Joyce's choice of writing as a career.  She told Kathleen that she would have preferred James to be a singer (He was a good singer and he had a strong affection for music and great knowledge of it.).  Nora also complained to her sister that Jim drank too much.

Their daughter Lucia's mental illness was another strain on the relationship.  By her mid-twenties, Lucia's behaviour had become erratic.  Her condition worsened when a love affair with playwright Samuel Beckett turned sour and he rejected her.  After bringing in many specialists to help Lucia, including Carl Jung in 1934, her parents finally placed her in an institution.  James Joyce often visited his daughter, but Nora refused to see her.

Despite the strains in their relationship and Nora's criticism of James, she married him in a civil ceremony on July 4, 1931.  The wedding took place at a registry office in London, England.  James Joyce was 49 years old at the time.  His bride was 47.  Their 23-year-old daughter, Lucia, had not
even known that her parents were unwed.

The wedding of James Joyce and Nora Barnacle, more than a quarter of a century after their first meeting, created a frenzy in the British and Irish press.  Below is a version of the photograph by the London Daily Standard.  The newlyweds are shown after their register-office marriage accompanied by Joyce's solicitor, Fred Monro. (right).  Joyce became a UK resident and took a lease on house in Kensington in London before applying for a marriage licence. 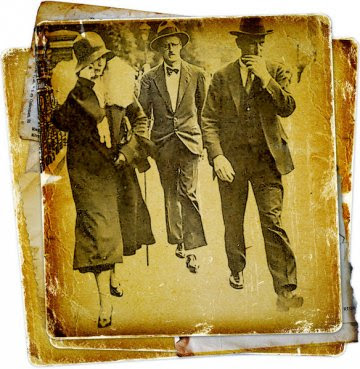 After the fall of France in 1940, Jim and Nora fled from the Nazis and returned to Zurich.  James Joyce died in Zurich on January 13, 1941, of complications from a perforated ulcer.  He was 58.  After Joyce's death, Nora decided to remain in the Swiss city.  She died of acute renal failure in Zurich on April 10, 1951 at the age of 67.

Life was not kind to the children of James Joyce and Nora Barnacle.  In 1932, Lucia Joyce, a dancer, suffered a mental breakdown. At her father's 50th birthday party, she threw a chair at her mother.  Her brother Giorgio took her to a medical clinic and checked her in.  She underwent treatment in Paris and Zurich and was eventually diagnosed as a schizophrenic.  In 1935. when she was 28 years old, the Joyces put her in an asylum outside of Paris.  She spent the remainder of her life in mental institutions.  In 1951, she was sent to St. Andrew's Hospital in Northampton, England.  After spending many lonely years at St. Andrew's, she died there in 1982 at the age of 75.

Lucia's alcoholic brother, Giorgio Joyce, became a musician.  On December 10, 1930 (before the marriage of his parents), Giorgio wed Helen Kastor Fleischmann., a New York divorcee who was much older than he.  Helen, like his sister, was eventually diagnosed as a schizophrenic.  The couple had a son named Stephen James Joyce.

Stephen Joyce was born in France on February 16, 1932.  He resides in France and remains James Joyce's only living descendant.

Many regard Ulysses as one of the greatest novels ever written.  It chronicles one day in the life of a Jewish Dubliner named Leopold Bloom, his wife Molly and an aspiring writer named Stephen Dedalus.  The events of the story all take place on June 16, 1904.  The novel traces the adventures of Bloom as walks through the city of Dublin. and it is filled with countless literary and linguistic references.  It also contains passages written in a stream of consciousness style.

Every year on June 16th, fans of James Joyce celebrate Bloomsday by having public readings from Ulysses, dramatizations and pub crawls.  In Dublin, tourists dress in Edwardian costume and retrace the steps Leopold Bloom around the city.  They stop at such landmarks as Davy Byrne's Pub.  Below is a 2004 photograph  of Bloomsday celebrations on North Great George's Street in Dublin.  The crowd is enjoying a street party provided by the James Joyce Centre. 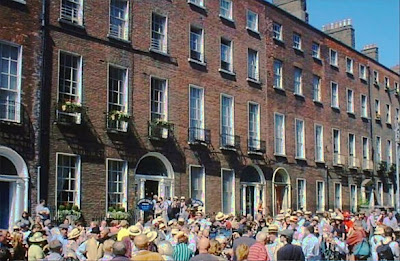 Although I was hoping that Vancouver would come through, I have to be fair and admit that Boston deserved to win the Stanley Cup.  The Canucks had home ice advantage and the whole city of Vancouver behind them (plus thousands of Canadian fans) and they came up flat.  They couldn't even score a solitary goal.  They came up with nothing but a big fat goose egg.  They lost 4-0.  Boston proved to be hungrier and much more inspired.

Roberto Luongo must be feeling awful.  I still think he's a good goalie, but he has let greatness slip away from his grasp.  He didn't rise to the occasion when it counted.  It's time for Luongo and the rest of the team to take a good hard look at themselves.  It's going to be a long, hot summer.

As for the fans in Vancouver, I know they are disappointed in their team.  Nevertheless, there is no excuse for the rioting that went on in the city after the loss.  It is just reprehensible and shameful.