On January 2, 2017, I viewed an exhibition of the work of glass sculptor Dale Chihuly at the Royal Ontario Museum (The ROM) here in Toronto.  The exhibit did not receive good reviews from critics such as James Adams in The Globe and Mail who wrote: "It's a sensational show - albeit in the pejorative sense of sensational  Meaning: Full of Teletubby colours and flash and bigness and strange shapes drawn from some Baudelairean fever dream or the remnants of Pee-Wee's Playhouse."  That's a pretty scathing critique!

I am certainly no art critic.  However, I did enjoy the exhibition.  Here are some photos I have taken and I will let you judge for yourself. 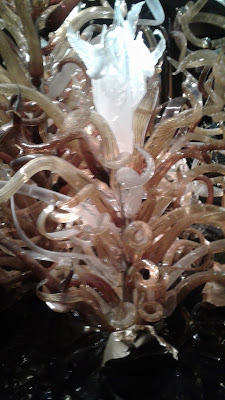 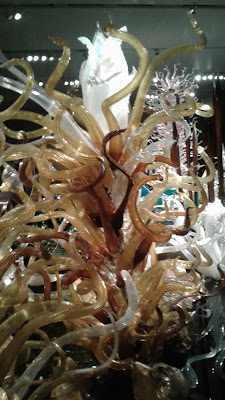 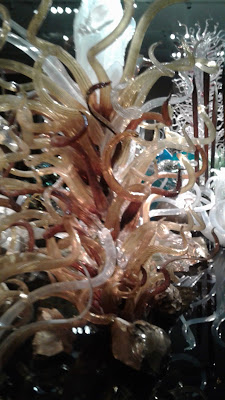 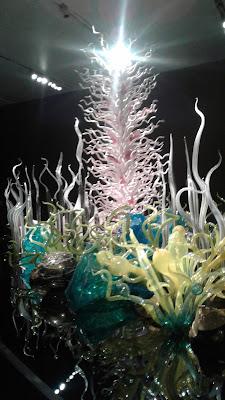 This work was specifically designed for the Royal Ontario Museum. 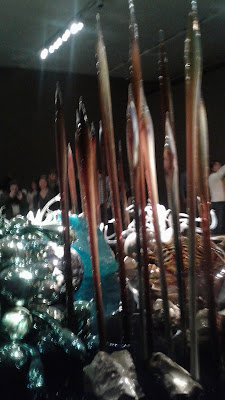 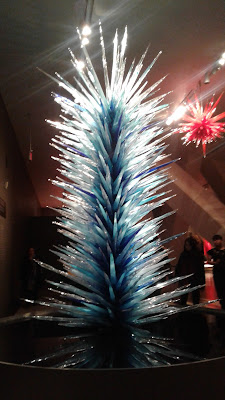 Chihuly originally created these floral-like forms in 1986.  He installed them in the ceiling of the Seattle Art Museum in 1992, 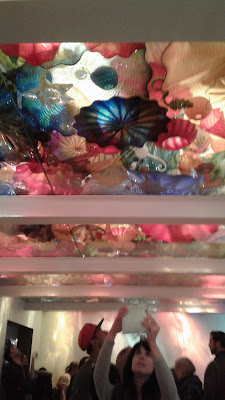 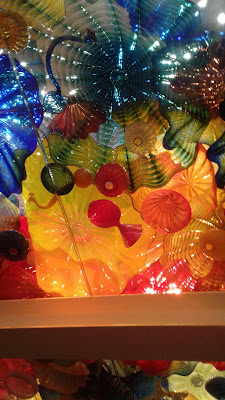 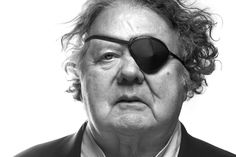 Dale Chululy is born in Tacoma, Washington, USA on September 20, 1941 and is based in Seattle. He studied interior design at the University of Washington.  In 1968, he worked at a glass factory in Venice, Italy and observed the team approach to glass blowing.  In 1971, he co-founded the Pilchuck Glass School near Stanwood, Washington.  In 1976, he was involved in a head-on car crash in England.  His face was severely cut by windshield glass and he lost the sight in his left eye.  He also injured his right shoulder in a 1979 bodysurfing accident and was no longer able to blow glass, so he employed others to do it for him.  In 1995, he began Chiluly Over Venice, for which he installed glass sculptures over Venice's canals and piazzas.

Chiluly's art is included in museums and collections around the world. The ROM has two Chiluly's in its permanent collection.

Chiluly's  well- known series of works include: Cylinders and Baskets in the 1970s; Seaforms, Macchia, Venetians, and Persians in the 1980s; Niijima Floats and Chandeliers in the 1990s; and Fiori in the 2000s.