Number 16 presents its second U.S. Presidents and First Ladies Quiz (the first one was posted on July 11, 2011 and you can find it by pressing the QUIZ tab above).  Are you ready to test your knowledge?  Then, let's go!

1.  What is the name of the only film that Ronald and Nancy Reagan appeared in together during their acting careers?

A.  Bedtime for Bonzo

C.  Hellcats of the Navy

D.  The Girl from Jones Beach

E.  This is the Army

2.  Who was the first American First Lady to vote in a presidential election?

3.  Which U.S. President was an accidental bigamist?

4. Who was the last president to own slaves.?

5.  Mary Todd Lincoln had an accident in 1863. What kind of accident did she have?

A.  She slipped on some ice on a cold day in Washington, D.C.

B.  She suffered some burns when a lamp fell over.

C.  She fell down some stairs at the White House and hit her head.

D.  She was thrown from her carriage and knocked unconscious.

E.  Her hands were caught in a drawer and she broke some bones.

A.  Yes, he was Eleanor's grandfather.

C.  No, they were not related.

D.  Yes, he was her older half-brother.

7.  Which U.S. President had the reputation of being a man of few words?

8.  What was President Franklin Roosevelt's hobby?

9.  Which statement is true about Dolley Madison, wife of James Madison, the 4th President of the United States? 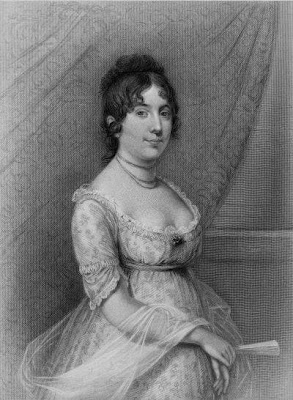 A.  Dolley Madison was born in Virginia.

B.  Dolley Madison was raised in the Quaker faith.

D.  Dolley Madison was known for her beautiful singing voice.

10.  Which First Lady was declared insane and sent to a sanitarium?

Ronald and Nancy Reagan appeared in Hellcats of the Navy, a 1957 World War II submarine film.  It was released in 1957 and Reagan's wife billed as Nancy Davis, her professional name.

Andrew Jackson, the 7th President of the United States, unwittingly became a bigamist.  In 1791, many years before his election to the presidency, Jackson married a young woman named Rachel Robards.  They lived together as husband and wife for two years before discovering that Rachel's first husband, Lewis Robards, had never actually completed their divorce.  This meant that Rachel's marriage to Andrew Jackson was invalid and that she was still technically married to Lewis Robards.  Robards finally obtained a divorce in 1793 and Andrew and Rachel wed in Nashville in 1794.

Zachary Taylor, the 12th President of the United States (1849-1850), was the last president to own slaves.  Nevertheless, many Southerners were upset with Taylor's moderate position on the expansion of slavery and his opposition to Southern sectionalism.

On July 2, 1863, Mary Todd Lincoln was injured in a carriage accident just outside of Washington, D.C.   She was thrown to the ground and her head hit a rock.

Theodore Roosevelt was Eleanor Roosevelt's uncle.  He was the older brother of Eleanor's father, Elliott Roosevelt.  Eleanor's maiden name was the same as her married name because she and her husband, Franklin Delano Roosevelt, were distant cousins.  When Eleanor married Franklin, on March 17, 1905, President Theodore Roosevelt gave her away in place of her deceased father.

Calvin Coolidge, 30th President of the United States, was a man of few words and his nickname was Silent Cal.  There is a story that columnist Dorothy Parker once approached then-Vice President Coolidge at a dinner party.  She told him that she had bet against someone who said it was impossible to get more than two words out of the Vice President.  Coolidge is said to have famously replied, "You lose."

FDR was an avid stamp collector and he had an extensive collection.

Dolley Madison was born into the Quaker faith.  She was expelled after marrying James Madison because he was an Episcopalian.  She attended Episcopalian services with her husband and was confirmed in the faith on July 15, 1845 at St. John's Church in Washington, D.C.

On May 20, 1875, a decade after her husband's assassination, Mary Todd Lincoln was committed by trial (on the petition of her son, Robert) to Bellevue Place, a psychiatric hospital in Batavia, Illinois.  Mrs. Lincoln was eventually released into the custody of her sister, Elizabeth Edwards.