World Press Freedom Day: Rise up and support freedom of the press! 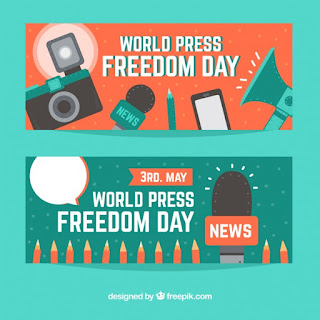 The basis of our governments being the opinion of the people, the very first object should be to keep that right; and were it left to me to decide whether we should have a government without newspapers or newspapers without a government, I should not hesitate a moment to prefer the latter.

Today is World Press Freedom Day and I would like to express my unfailing support for the media. The press, of course, is not perfect and it is certainly not above criticism.  However, freedom of the press is a necessary component of democracy.  In fact, there is no democracy without it.  The French author and philosopher, Albert Camus (1913-1960), put it this way in Resistance, Rebellion and Death (1960): "A fee press can of course be good or bad, but, most certainly, without freedom it will never be anything but bad . . ."

One of the first actions of dictators and tyrants is to suspend freedom of the press.  The media may not be armed with guns and bombs, but it is one of the greatest obstacles to dictatorship and totalitarianism.  It's no surprise, therefore, that Adolf Hitler had a very hostile attitude toward the press.  In his 1925 autobiographical book, Mein Kampf, the Nazi leader wrote the following:  "It is the press, above all, which wages a positively fanatical and slanderous struggle, tearing down everything which can be regarded as a support of national independence, cultural elevation, and the economic independence of the nation."

Every day, journalists risk their lives to uncover the truth.  Many die or sustain injuries in war zones. Of course, media outlets are unfairly bias.  Of course, some journalist lack integrity.  Yet, there are many Woodwards and Bernsteins out there.  We need them to uncover scandal and wrongdoing. Their sources should be protected so that they can do their job properly.

Here in Canada, we are not immune to interference with a free press.  It recently came to light that seven Quebec journalists have been under surveillance by the Sûreté du Québect (the Quebec Provincial Police).  South of the border, U.S. President Donald Trump has been demonizing the press at every opportunity.  In February, Trump called the news media "the enemy of the American people."  That is extraordinary language for the President of the United States.  It is the language of a dictator.  It elicited a response from former U.S. president George W. Bush.

Although I strongly disagree with Bush's politics, he was absolutely correct in his reaction to Trump's comments.  He told Today's Matt Lauer that a free press was "indispensable to democracy."  "We need the media to hold people like me to account," he said in his exclusive interview with Lauer.  "Power can be very addictive and it can be corrosive, and it's important for the media to hold people like me to account."  After noting that he spent a large amount of time during his two terms in office trying to persuade Russian leader Vladimir Putin to nurture an independent press, Bush went on to say,, "It's kind of hard to tell others to have an independent free press when we're not willing to have one ourselves"

Donald Trump has expressed nothing but contempt for the New York Times and only approves of media outlets that are favourable toward him, such as Fox News.  Trump doesn't seem to comprehend that the press is not supposed to be a cheering leading team for his administration.  That's why he refers to any news story that he doesn't like as "fake news."

On January 6, 1941, U.S. President Franklin D. Roosevelt articulated his famous Four Freedoms in his State of the Union Address.  In his speech, FDR proposed four fundamental freedoms that "everyone in the world" should enjoy: Freedom of Speech, Freedom of Worship, From From Want and Freedom From Fear.  Without freedom of speech, which includes freedom of the press, the other three freedoms could not exit.

Sadly, however, freedom of the press is in jeopardy around the world.  Donald J. Trump is sitting in the Oval Office fight now. and America sorely lacks the leadership of a Franklin Delano Roosevelt. The United Kingdom is preparing to leave the European Union. Vladimir Putin is ruling Russia with an iron hand and the far right is in ascendance in Europe. Undoubtedly, we are living in challenging times.  That is why, more than ever, we need freedom of the press.

Freedom of the press is the linchpin of freedoms.  It is precious and must never be taken for granted. It must be cherished as a pillar of democracy.  As such, it should be protected and defended with steadfast vigilance. We can not afford to be complacent.  On this World Press Freedom Day, give a thought to the importance of a free press.  Ask yourself if you would would wish to live in a country without it.

I will leave you with one more quotation, from American author and commentator Dr. DaShanne Stokes:

Fascism thrives in obscurity and darkness.

How to Build a Lego Bedroom

Here is an infographic that will highlight some bedrooms with a Lego design.  Included are a number of creative ideas for beds, wall art, customized items, and accessories.  I hope you find them interesting and useful.

Lego Bedrooms by Terrys Fabrics.
Posted by Joanne at 12:27 AM No comments: