Another mass shooting in the USA 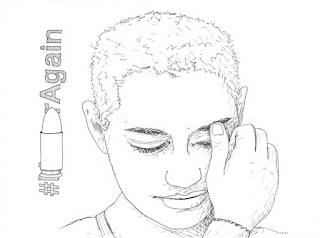 Ho Hum!  It's a sunny summer day.  There's another mass shooting in the US of A.

According to CNN, a six-year-old boy, a 13 year-old girl and a man in his twenties were killed last night when a gunman opened fire at the Gilroy Garlic Festival in northern California.  The 19-year-old gunman purchased his AK-47 style rifle legally in Nevada on July 9.  At least 12 others were injured before the killer was shot to death by three police officers.  The victims, whose conditions ranged from fair to serious, were taken to taken to nearby hospitals.  Seven patients with gunshot wounds were transported to Santa Clara County Health System.  Their ages ranged from 12 to 69.  One was in critical condition.  Authorities are searching for a second suspect whom some witnesses claim was involved in the shooting.

The whole incident absolutely sickens me.  Assault rifles should be banned.  These mass murders have become routine in America.  Innocent people (including children), enjoying a food festival on a summer day, should not have to fear for their lives.  Is this what America has become?  Donald Trump and his Republican lackeys will offer their thoughts and prayers.  Thoughts and prayers are good, but they are not good enough.  Much more is needed.  There must be tighter gun control and more background checks or these shootings will continue unabated.  They'll be more Parklands and Sandy Hooks and Las Vegas shootings.  Don't accept this.  Push for gun control legislation. 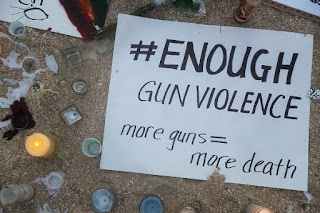 America, it's time for action.  Do you want to live this way, fearing for yourselves and your children?  It's time to stop this insanity by voting Trump and his Republicans lackeys out of office in November of 2020.  Tune out the National Rifle Association.  The NRA has blood on its hands.

I am disgusted and saddened beyond words by what happened in Gilroy, California on Sunday, July 28, 2019.  Don't be numb to gun violence.  Don't meekly accept that this is the new reality.

The 10 Most Bankable British Actors

Here is an infographic on the most bankable (and least bankable) British actors.  If you are a fan of British cinema, its facts and statistics should be of great interest to you.  I hope that all film lovers find it useful, informative and entertaining.


Using data from the 50 highest grossing films, spanning from 1993 to present day, price comparison experts Money Guru analysed which British actors offer the best Return On Investment (ROI) based on their Box Office sales as a leading actor and the respective film budgets. They uncovered that Dame Julie Andrews is the most bankable British actor, offering a staggering 785% ROI and £6.85 for every £1 spent ($8.53 for every $1 spent).

Here are the 10 most bankable British actors. 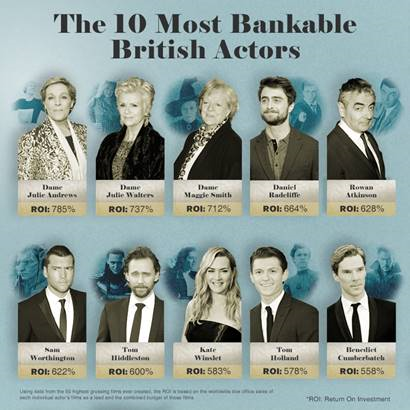 Dame Julie Andrews has claimed the title for the most bankable British star, offering a staggering 785% ROI (and £6.85 for every £1 spent) when looking at her worldwide box office sales as a leading actress in nine films. Andrews boasts a career that guarantees sales, with notable films including Mary Poppins and The Sound of Music.

The second British film star that drives cinema sales is another actress, Dame Julie Walters, with her huge 737% ROI generated over two Blockbusters. Throughout her career, she has been nominated for two Academy Awards and won a Golden Globe, while also boasting an extensive TV portfolio. While she is a household name within the British film industry, most of her popularity is generated as a supporting star. Yet, compared to Daniel Radcliffe’s 11 films, Walters will get you £6.36 for every £1 spent in just two films.

In third place is another actress, Dame Maggie Smith, with an ROI of 712%. Her ROI was calculated from her starring in seven notable films as the lead, such as The Best Exotic Marigold Hotel and The Lady in the Van. Additionally, she also offers £6.11 for every £1.

Surprisingly, it’s the British actresses that offer 15% more value than the British male actors.
In the past few years, there have been high-profile salary discrepancies in the film industry - particularly between male and female stars. It has previously been reported that the world’s 10 highest paid actresses make less than half of the 10 highest paid male actors, when totalling their combined salaries. While gender pay discrepancies are still very much a hot topic, Money Guru’s research suggests that female stars are more likely to produce a hit than their male counterparts.
Only two male actors make the top five list of actors offering the most value, Daniel Radcliffe and Rowan Atkinson. Whereas, Dame Julie Andrews, Dame Julie Walters and Dame Maggie Smith are the top three British film stars that guarantee Box Office success (based on their previous performances).
Previous reports have found that actresses played only 32% of the characters in the world’s top-grossing films of the 21st century, with fewer subsequently cast in lead roles.

Similarly, according to Forbes, the 10 highest paid actresses in 2018 earned a staggering £443 million less than the highest-paid actors. A notable example of the pay discrepancies occurred in 2018, when Michelle Williams received $1,500 for the reshoots of her role in All the Money in the World, compared to the $1.5 million salary of her male co-star, Mark Wahlberg.

‘Mr Bean’ is one of Britain’s most successful actors

Closely following suit to the most valuable actresses are Daniel Radcliffe and Rowan Atkinson.
Daniel Radcliffe is Britain’s ‘Chosen One’ when it comes to male actors with an ROI of 665%. Starring in 11 films, including the Harry Potter film series and The Woman in Black, Radcliffe guarantees Box Office hits and £5.56 for every £1.
However, closely following suit is Rowan Atkinson - otherwise known as the country’s lovable, Mr Bean. Despite stiff competition from Oscar winners, Atkinson is the fifth most bankable actor. His ROI sits at 628%, based on Box Office sales of five films, also offering £5.28 for every £1.
Atkinson’s combined Box Office sales total nearly £1 billion and he has starred in a number of popular TV shows and films, including the Mr Bean and Johnny English franchises.
Other stars making an appearance in the top 10 most bankable include the aforementioned Kate Winslet - boasting 12 films in the lead role - and Sam Worthington, starring in five blockbuster films.

The Academy Awards (otherwise known as the Oscars) are considered to be the most prestigious film awards for actors. While the awards are an honour, they do not ultimately spell Box Office success, according to Money Guru’s study.
When analysing the Box Office success of British actors, Money Guru found that Russell Brand is more likely to bring in sales and provide a better ROI than Oscar winners, with lead roles in the likes of Get Him to the Greek and a supporting role in the hugely popular franchise, Minions.
Brand’s ROI stands at 226% from just three films, compared to Academy Award winner, Sir Ben Kingsley, who offers an ROI of 208% from eight lead roles. 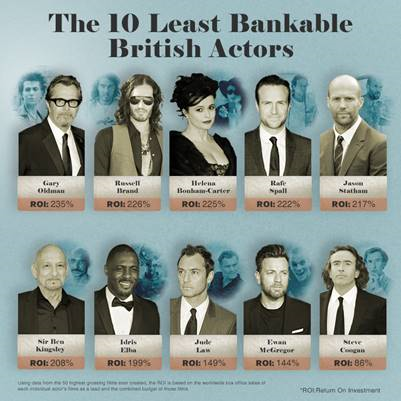 
According to the Money Guru study, TV and film star Steve Coogan is Britain’s least bankable actor, based on his Box Office success when cast in the lead role. While his career spans almost 40 years - with four leading roles, including Alan Partridge: Alpha Papa - his average ROI sits at 86%. While Coogan provides £0.13 for every £1, he is well known for his supporting roles in Minions, the Pirates of the Caribbean film franchise and Kingsman: The Secret Service.
Surprisingly, Ewan McGregor and Jude Law are the second and third least bankable Brit actors, with ROIs of 144% (£0.44 for every £1) and 149% (£0.49 for every £1) respectively. McGregor has starred in 25 films as the lead, including Oscar winner, Moulin Rouge, and Trainspotting.
Similarly, Jude Law boasts 10 lead roles and has been nominated for an Academy Award for Best Actor for Cold Mountain.
Notably, only one actress, Helena Bonham Carter, made the Money Guru list of Britain’s least bankable actors, further reinforcing that actresses offer a better ROI than male actors, and should be considered for more leading roles.


So, the results are in. If you are looking to create a future Box Office hit, it’s worth noting that the top 10 British actresses offer 15% more value than the top 10 male actors - despite making less than half the money and starring in 68% less leading roles.

https://www.moneyguru.com
Posted by Joanne at 11:20 AM No comments: