The Imperial Presidency of Donald Trump 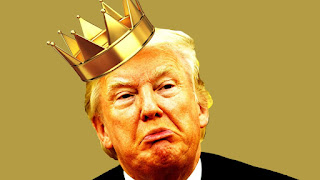 Let there be light and let it shine on the truth so that America and the world can be saved from the tyranny of the Imperial Presidency of Donald Trump.  President Trump insists that he is innocent and that he has not done anything wrong.  Don't believe him, America!  You can see that he is not behaving like an innocent man.  Why doesn't he want the American people and the rest of the world to know the truth?  An innocent man exposes himself to the light, but Donald Trump has cloaked himself in darkness.  If he has nothing to hide, why has the White House been doing  everything in its power to withhold witnesses and documents from Congress.  I challenge every Republican and Trump supporter to provide me with a satisfactory answer to that question.

Donald Trump and his Republican cohorts have insulted the American people.  Why don't they think that Americans are capable of making up their own minds after having access to all the evidence?  Why can't John Bolton and Mick Mulvaney testify?  Witnesses testified at the Senate trials of Andrew Jackson and Bill Clinton.  What kind of trial has no witnesses?

Is Team Trump afraid that given the evidence, Trump's perfidy will be laid out for all to see.
Trump's aim is to continually expand the powers of the presidency, but there is a reason why the founders created two other branches of government.  There is a reason why the Congress is a co-equal branch which cannot be ignored.  There is a reason for the impeachment process.  That reason is to curb presidential power. That reason is to stop a president like Trump from becoming too autocratic.  If Trump wins another four years in office. the United States will be unrecognizable.  Trump might as well be crowned king or emperor.  This cannot and should not be allowed to happen to America and the world.

Trump's trained seals in the Senate are not going to convict him.  Barring some unforeseen circumstances, there is only one way to save America.  He must be defeated in the 2020 election.  I write this because I am alarmed.  I truly believe that Donald J. Trump is not only a threat to America, but a threat to the whole world.  This is the gravest threat to the Republic since the outbreak of the Civil War in 1861.

No, Donald Trump!  You can't do anything you want.  You are not above the law.  Contrary to what you say, the president cannot kill someone on Fifth Avenue with impunity.  He or she must be accountable to the people.  The Constitution of the United States says so.