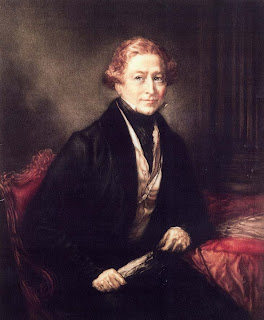 Do you know why police officers are referred to as “Bobbies” in Britain and “Peelers” in Ireland? Sir Robert Peel is the man responsible for those monikers. Peel was Prime Minister of the United Kingdom from December 10, 1834 to April 8, 1835 and from August 30, 1841 to June 29, 1846, and he founded the British Conservative Party. Today is the 223rd anniversary of his birth. He was born the son of an affluent textile manufacturer on February 5, 1788 at Bury, Lancashire, England.

Robert Peel entered politics at a young age and became a Member of Parliament for the Irish borough of Cashel, Tipperary when he was only 21.  In 1813, as Chief Secretary in Dublin, he proposed the establishment of a special police force later to be known as “Peelers.” He was a rising star in the Tory Party when he was appointed to the cabinet as Home Secretary in January of 1822. As Home Secretary, Peel introduced several major reforms to British criminal law. He reduced the number of crimes punishable by death and repealed several criminal statutes. He also reformed the prison system by introducing wages and education for convicts.

It was during his service as Home Secretary that Robert Peel brought about the Metropolitan Police Force Act of 1829, thus establishing the concept of a modern policing. An organized police force was set up for London with 17 divisions. Each division consisted of 4 inspectors and 144 constables. The force was placed under the control of Scotland Yard and was accountable to the Home Secretary.

The early police were dressed distinctively in dark blue longcoats and tall hats. Their tall hats were convenient for standing on and looking over walls.  They wore blue attire because blue was the colour of the popular British Navy.  Their sole weapon was a truncheon.

Many of these original police officers were drunks and bullies and they did not endear themselves to the public. As a result, a large number of them did not keep their jobs. Eventually, however, the terrible impact of crime, especially organized crime, caused the public to accept the Bobbies, even if it did not embrace them.

Sir Robert Peel died on July 2, 1850 at the age of 62.  He was thrown off his horse while riding up Constitution Hill in London on June 29th.  The horse stumbled on him and he was crushed.  The cause of his death is described as a "clavicular fracture rupturing his subclavian vessels."

Well, the Toronto Raptors finally ended their ugly losing streak of 13 losses in a row. They defeated the Minnesota Timberwolves by a score of 111-100. The second worst stretch in the history of the Raptors is over, and not a moment too soon. As Jose Jose Calderon said of the slump, “It was getting heavy on our souls.”