Donald Trump for President? Please NO! 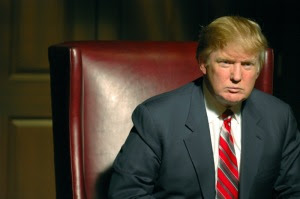 He’s flamboyant, outspoken and filthy rich. His name is Donald Trump and he’s an in-your-face real estate tycoon. Hang on to your hats, ladies and gentlemen, because the bombastic businessman is considering a run for the Republican nomination for President of the United States in 2012. It’s a horrifying thought!

The Donald is many things, but he’s certainly not dull. With his antics and his feuds, he attracts an enormous amount of attention. Yes, he’s a real showman and he would spice up any presidential race. It’s the prospect that he might win that frightens me.

An April 15-20 Gallop poll shows that the New York real estate mogul leads among moderate and liberal Republicans. The poll indicates that 64-year-old Donald Trump is gaining momentum. He is tied with former Arkansas Governor Mike Huckabee as the preferred Republican nominee for president. Trump has the highest level of support of any right-wing candidate among moderate and liberal Republicans (21 percent).

The splashy developer also appears to be attracting conservative voters. At 13 percent, Trump has a higher percentage of conservative supporters than Tea Party darlings Sarah Palin, Tim Pawlenty and Michelle Bachmann. It now seems that even evangelist Franklin Graham is warming up to The Donald. During a recent ABC News interview, Graham declared that he considers Trump to be “very capable” and that his opinion of him has changed. Graham stated, “Donald Trump, when I first saw that he was getting in, I thought, well, this has got to be a joke. But the more you listen to him, the more you say to yourself, ‘You know, maybe the guy’s right.’”

What has The Donald been up to lately? Well, he has spent a great deal of time questioning whether President Barack Obama is really an American. He’s been harping on whether Obama was really born in Hawaii. Really, Mr. Trump, why can’t you let that rest? Why did you have to reopen that can of worms? Barack Obama was born in Honolulu on August 4, 1961. That’s a fact! Trump is just pandering to the arch-conservatives in the Republican Party. He’s diverting voters from far more pressing matters. Not only that, but does it really matter that the President of the United States is born on American soil? As long as a candidate is an American citizen and has lived in the U.S. for at least 14 years, that’s what’s important. It is absolutely ridiculous that an immigrant cannot be president, even if he or she came to America as a two-year old child.

If Donald Trump wishes to oppose Obama, let him stick to the real issues. Let him discuss the economy, the war in Afghanistan or the way greedy, unregulated Wall St. barons brought America and much of the the world into a terrible recession. Why are Trump and many others so fixated on Obama’s place of birth? Would they be doing this if he weren’t black? Are they not encouraging the feeling among Americans that their president is some kind of foreigner and not really one of them? It’s the politics of fear and it’s shameful.

In 2008, Donald Trump was given approval from the Scottish government to build the $1.6 billion Trump International Golf Links on the coast of Scotland. In addition to the golf course, the massive development includes 950 holiday homes, an equestrian centre, tennis courts and a residential village. This deal has been surrounded by controversy and legal complications. Trump has been accused of planning to evict families from their land in order to build his glitzy golf resort.

There are also concerns about the effect that the project will have on the wildlife habitat in the area. When Trump was given the green light to go ahead with his development, the decision was severely criticized by Helen McDade of the John Muir Trust, a U.K. charitable company established in 1983 to preserve wilderness and indigenous animals. She called it a mockery of Scotland’s environmental designations! McDade declared that the government’s rationale seems to be “that it is okay to ignore any number of protections that are in place to safeguard Scotland’s environment, provided there is a big enough buck to be made at the end of it.” She said that it was “a green light for development any place, any time, regardless of the consequences. Decisions such as this suggest that the planning system which has helped protect Scotland’s incomparable landscape is rapidly being eroded.”

President Barack Obama has dignity and a sense of humour. He has the ability to laugh at himself. It appears that Donald Trump does not share that characteristic. At an annual White House gala for journalists last Saturday night, Obama joked about the “birther” debate, Trump’s potential presidential aspirations and his television reality show. Images were flashed on ballroom screens spoofing the real estate tycoon’s penchant for naming his properties after himself. The images were labelled “Trump: The White House.” The Donald was in attendance and was not amused. He couldn’t even manage a smile. He just sat there squirming and looking extremely uncomfortable.

Later, in an interview with CNN, Trump made an attempt to be a good sport. He conceded that he thought “some of what the president did was pretty good.” “I understand it was a lion’s pit,” he said. “I was walking into it. I’ve been there before and I thought it was an entertaining evening.” His body language at the event, however, told a very different story.

Watch this video of Obama poking fun at Trump at the annual White House Correspondents' Association dinner and make your own judgement.

Donald Trump is awfully adept at making money.  According to Forbes Magazine, hia net worth in 2011 is $2.7 billion.  The man is also a formidale showman and an entertainer, but do those qualities alone make him suited for the office of President of the United States? The fact is that Trump has no political experience. The late Ronald Reagan was often derided for being a B-movie actor, but he at least served as governor of California before he ran for president.

The Donald informed CNN that he will make an announcement about his presidential intentions after his realty show, Celebrity Apprentice, finishes for the season on May 22. If he decides to run, does he really have a chance? Is it possible that the Republican Party would choose someone as untested as Donald Trump for its presidential candidate? I doubt it, but stranger things have happened. If Trump should lose the Republican nomination, he may run as an independent, thus splitting the right-wing vote. Such a scenario would virtually ensure a second term for Obama, which would not be a bad outcome at all.

Why, in this day and age, does it require about a year and a half to hold a presidential election in the United States?  I realize that choosing a president is extremely important.  The candidates should be carefully screened and scrutinized.  There should be time for debate and reflection.  Nevertheless, it shouldn't take that long, not with modern technology and modern transportation.

Here in Canada, we have just had a general election.  Our campaign took 37 days.  Some Americans may argue that 37 days is too short a time.  It is also true, of course, that our political systems are different.  Still, a year and a half of  relentless campaigning seems far too long and unnecessary.  It's too gruelling for the candidates and the voters.