Should the Loon Be Canada's National Bird? 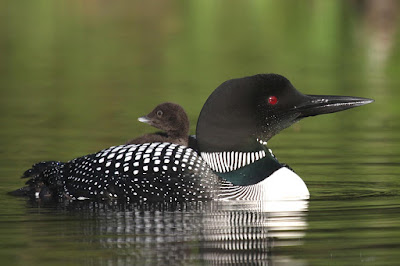 - From the song "Ringneck Loon"
Lyrics by Gordon Lightfoot

Call of the Loon

Across the lake, the loon call echoes . . .
Magnified by water bird, this temple gong
summons all to worship
in the shrine of silence


It is right and fitting that the loon should be Canada's national bird.  The Canadian people have spoken.  They have made their choice clear in a recent online survey - part of the "National Bird Project," presented by the Royal Canadian Geographic Society (RCGS) and Canadian Geographic magazine. The contest ended August 31st and the results are in.  The common loon finished in first place with 13,995 votes.  The snowy owl came in second with 8,948 votes, followed by the gray jay (also known as the whiskey jack) with 7,918 votes.  The Canada goose received 3,616 votes.  The goal, according to the RCGS, is "to designate an official bird for Canada by 2017, the country's sesquicentennial (150th anniversary)."

On September 19th, ornithologists, cultural experts and writers will converge in Ottawa to discuss the issue.  They will discuss the results of the survey and debate the relative merits of each of the top five birds,  After choosing from among those five candidates, they will inform the federal government of their recommendation.  The official winner will be revealed in the Canadian Geographic's December 2016 annual wildlife issue (on newsstands November 21st).

It is important to remember that the loon, despite being the popular choice in the survey, will not necessarily be the recommendation of the Royal Canadian Geographic Society.  There are other factors that the RCGS will take into consideration before making a decision. It's not just a popularity contest.  Still, there are many solid reasons why the loon is the best choice for Canada's national bird.

More than any other bird, the loon symbolizes Canada,  Common loons can be found throughout this vast country, from Newfoundland and Labrador to British Columbia, as well as in the three northern territories.  The loon is a  magnificent water bird and it represents the solitude of the wilderness.  Its distinctive call is hauntingly beautiful.

The loon appears on Canada's  one dollar coin, commonly known "the loonie,"  It is already the provincial bird of Ontario and, yes, it's the state bird of Minnesota too.  That doesn't matter, though.  Oregon's state animal is the beaver, but the beaver is still widely recognized as a symbol of Canada and it's Canada's national animal.

The snowy owl, the gray jay and the Canada goose are not without great merit and they are all worthy candidates.  I like the the snowy owl immensely and it would be my second choice,  It is one of largest species of owl and has beautiful, thick plumage. The gray jay (whiskey jack) would be my third preference. It is a member of the crow and jay family and can be seen in the boreal forests of North America.  My fourth choice, the Canada goose, bears the name of our country and it can be be found in every Canadian province at one time of the year or other.  However, it is a honking bird (I'm referring to both its size and its sound) that can be quite a nuisance at times.  (It leaves its calling card everywhere).  I much prefer the call of the loon than the honking of a Canadian goose.

I know where I stand.  It's got to be the loon for me.  Do you agree?  Take Number 16's own survey on Canada's national bird.

What is your choice for the national bird of Canada?

EDITOR'S UPDATE (November 22, 2016):  On Wednesday, November 16, 2016, the Royal Canadian Geographic Society announced its choice for Canada's national bird.  At the society's annual dinner in Ottawa.  Its expert panel chose the gray jay, also known as the whiskey jack.  In the online contest, which attractded nearly 50,000 voters, the gray jay finished third to the common loon and the snowy owl.

Ornithologist David Bird (Yes, that's his name!), a member of the expert panel, stated that the gray jay is "a   poster child for the boreal forest, our national and provincial parks, and for climate change."  Bird argued that among the other finalists,the loon is already Ontario's provincial bird, the snowy owl is Quebec's and the black-capped chickadee is New Brunswick's.

It is important to note that nothing is official.  Canad's federal government has not even committed to naming a national bird.  Meanwhile, the debate continues.


EDITOR'S UPDATE (July 3, 2017):  It appears that Canada will not have a national bird this year, in time for the country's 150th anniversary.  Aaron Kylie, editor-and-chief of Canadian Geograhic, and others, contacted Heritage Minister Mélanie Joly.  They were told that "at this time we are not considering any new national symbols."  In an email to the CBC, a spokeswomen for the Department of Heritage confirmed this stance by stating: "At this time, the government of Canada is not actively considering proposals to adopt a bird as a national symbol."