The Mysterious Death of Christopher Marlowe: Murder in Elizabethan England? 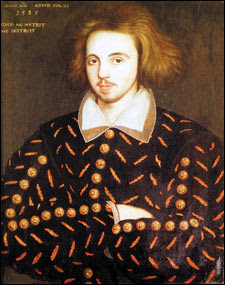 Are you fascinated by conspiracy theories?  Well, I have a dandy for you today.  Forget about JFK, Lee Harvey Oswald and the grassy knoll for a while.  Travel back in time with me to 16th century England, to an era when Queen Elizabeth I reigned supreme and men wore tights, ruffled collars and pointy beards.  On this day, 418 years ago, one of the great playwrights and poets of the Elizabethan age was viciously killed during an altercation at a tavern.  His name was Christopher Marlowe.

Christopher Marlowe was born in Canterbury, England in 1564, to John Marlowe, a shoemaker, and his wife, Catherine.  He and William Shakespeare.were born only months apart.  Although Marlowe's exact birthdate remains undetermined, it is  known that he was baptized on February 26, 1564.  Shakespeare was born in late April of that same year.

Marlowe's most famous work is a play titled The Tragicall History of the Life and Death of Doctor Faustus. Commonly referred to as Doctor Faustus, the play is based on the tale of a man who makes a pact with the devil and sells his soul in return for power and knowledge.  He is also well known as the author of the poem "The Passionate Shepherd to His Love" which begins with the oft-quoted line "Come live with me and be my love."

In early May of 1593, postings appeared around London threatening Protestants from France and the Netherlands who had come to the city.  One of these, the "Dutch Church Libel," contained a reference to one of Marlowe's plays.  It was signed, "Tamburlaine."  On May 11, the Privy Council called for the arrest of those responsible for the libels.  The next day, Marlowe's colleague and fellow playwright, Thomas Kyd,, was arrested and imprisoned.  His lodgings were searched and a fragment of a heretical tract was discovered that rejected the deity of Jesus Christ.

Thomas Kyd denied that the document belonged to him.  He stated, probably under torture, that Marlowe was the author of the heretical writings.  Kyd, the author of The Spanish Tragedy, first became acquainted with Marlowe around 1591.  The two writers were under the service of the same patron, an identified nobleman.  For a while, Kyd and Marlowe shared the same lodgings.


Thomas Kyd apparently never fully recovered from the suffering he had endured. Kyd was eventually released but was not accepted back into the service of his patron.  He died at 35 years of age in 1594. At the time of his death, he was utterly destitute. His mother legally repudiated the management of her son's estate, most likely because it was debt-ridden.

On May 18, 1593, a warrant was issued for Christopher Marlowe's arrest, probably on allegations of blasphemy. Marlowe was reputed to have Catholic sympathies. He was also suspected of being an atheist, a "heresy" that was considered a serious transgression in Elizabethan England.

On May 20, 1593, Christopher Marlowe attempted to present himself before the Privy Council.  He was told that they were not meeting that day.  He was released on bail and ordered to report to the court once a day until they did meet.  Marlowe apparently followed these instructions, but the Privy Council never had the opportunity to investigate the allegations against Marlowe.  On May 30, ten days after his initial attempt to go before the court for questioning, Christopher Marlowe was fatally stabbed by a man named Ingram Frizer.

Ingram Frizer was a rather unsavoury English businessman.  He was a commodity broker, a speculator who bought and sold property.  He also served as a kind of business agent for Marlowe's patron, Thomas Walsingham.  Frizer was not always honest in his business dealings.  According to Charles Nicholl, in his book The Reckoning: The Murder of Christopher Marlowe (1993), Frizer teamed up with a man named Nicholas Skeres in a scheme to defraud a certain Drew Woodleff of his inheritance.  It is interesting to note that Skeres was present at Marlowe's killing.

Marlowe's death occurred at the home of  Eleanor Bull, a respectable widow whose great-niece, Blanche Parry, was a  companion of Queen Elizabeth I.  Eleanor ran a rooming house located on Deptford Strand, which was in Kent, but is now within London..  Her establishment was probably more of hotel in which meals were served than a public tavern.  It was frequented by dockyard supervisors and inspectors, various merchants and exporters of fine goods

On May 30, 1593,  the 29-year-old Marlowe spent most of the day at Eleanor Bull's establishment with three companions - Ingram Frizer, Nicholas Skeres and Robert Poley. After dinner, a quarrel ensued over the bill for food and drink.  According to witnesses, Marlowe pulled out a dagger and wounded Frizer.  In the fight that followed, Fitzer seized the same dagger and stabbed Marlowe over the right eye, mortally wounding the young playwright.

On, June 1, 1593, am inquest was held into Marlowe's death by William Danby, the Coroner of the Queen's Household.  A 16-man jury determined that Ingram Frizer had acted in self-defence.  In his report, the Coroner concluded that "Ingram Frizer could in  no way flee" the attack on his life by Marlowe and that he was left with no choice but to kill him.  "And so it occurred in that affray that the said Ingram, in defence of his life . . . gave the aforesaid Christopher then and there a mortal wound above his right eye."  On June 28, 1593, less than a month after the inquest was held, the Queen granted Ingram Frizer a formal pardon.

This information wa uncovered in 1925 when a scholar named Leslie Hotson came upon the Coroner's report into the Marlowe death in the Public Records. In the course of his investigation, Hotson discovered the document containing the pardon given to Frizer.  To read the words of the pardon, click on the link below.

Information has surfaced in recent years, however, which raises doubts as to whether Marlowe's demise was merely the result of a drunken brawl. Was the great author deliberately provoked into the argument leading to his death?  A biographer and scholar named Park Honan has unearthed a document revealing that after receiving his royal pardon, Frizer was later gifted with a a substantial amount of property.  One has to wonder if this was payment for his part in the death of Christopher Marlowe.

Pofessor Honan, of the School of English at the University of Leeds, has cast suspicion on Marlowe's patron, Thomas Walsingham, in the killing of the poet.  Honan has pointed out that as a suspected atheist, any association with Marlowe would threaten Walsingham's standing at the royal court.  Marlowe was a detriment to his ambitions and Walsingham had reason to want to rid him from his life.

In 2004, Honan made the following statement on the climate of the times in Marlowe's England.  He said, "Early in the year, Parliament had ensured that heresy was akin to treason.  Dissidents were hanged.  The royal court was unlikely to reward any sponsor of heretics.  How could the law tolerate atheism or the Queen continue to favour Walsingham as the patron of a heretic if, in law, all heresy was treasonous?  As a patron of a so-called atheist, Walsingham risked damaging his reputation."

It remains uncertain whether the stabbing of Christopher Marlowe was connected to his arrest.  There is also a theory that Marlowe was intentionally provoked in order to prevent him from appearing before the Privy Council.  Had he been brought before the Privy Council, he might have implicated some very prominent men, including Sir Walter Raleigh.  Raleigh, a friend of Marlowe,  was also suspect of being an atheist.  There were rumours that he and Marlowe had scholarly conversations on the subject.

Espionage is also linked to the death of Christopher Marlowe.  Thomas Walsingham, Marlowe's patron, had contacts in the Secret Service.  His cousin, the late Sir Francis Walsingham had been Principal Secretary to Queen Elizabeth I from 1573 until his death in 1590.  Sir Francis was known as the Queen's "spymaster" and has been recognized as one of the earliest practitioners of modern intelligence methods for both foreign espionage and domestic security.

It is interesting to note that Nicholas Skeres and Robert Poley, Marlowe's dinner companions on the day of his death, were associated with Walsingham's intelligence operation.  Robert Poley, in fact, was a senior spy who had been used often as a messenger of secret documents to Scotland and the Low Countries.  He later became the operational chief of a spy network in the Low Countries.

Christopher Marlowe was secretly buried in an unmarked grave in the churchyard of St. Nicholas, Deptford.  Many years later, a  plaque was placed at the site.  Ingram Frizer, the man who took Marlowe's life, died in August of 1627, over 33 years after the tragedy at Eleanor Bull's house. 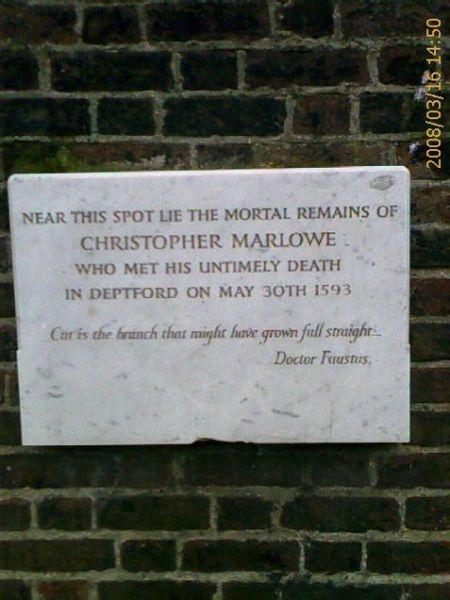 EDITOR'S NOTE (November 14, 2016): Gary Taylor, a Distinguished Research Professor at Florida State University, and his team of New Oxford Shakespeare researchers have decided that Christopher Marlowe should receive credit in the publication's latest edition for co-writing William Sharkespeare's Henry VI plays (written c. 1591).  This is a historic decision because it marks the first time Marlowe has been officially designated as co-writer of the three plays.