Last evening I visited the Indigo book store at Bloor and Bay Streets to see Margaret Trudeau promote her new book Changing My Mind.  She was interviewed by Indigo CEO Heather Reisman and they discussed Margaret’s struggle with bipolar disorder. They talked about the nightmare she endured, especially after the death of her son Michel. She lost a great deal of weight and was committed to a hospital for psychiatric treatment.

I have always been fascinated with the story of Pierre Trudeau, the intellectual Prime Minister of Canada and Margaret Sinclair, the eternal flower child from Vancouver. That is why I could not resist going to see her. Margaret is 62 now, and a grandmother. She has coloured her hair blonde and is as feisty and animated as ever. I found her to be very personable.

Here are some of the things Margaret Trudeau told the audience at her Indigo book-signing session.

1. She was so consumed by guilt that a doctor asked her what she had done that was so terrible. It wasn’t as if she were an axe murderer, he told her.

2. She played cards with the Rolling Stones.

3. She described Pierre as a wonderful man and a good father, although she claimed he was not generous to her with his money.

4. One of the reasons she separated from Pierre was that she felt she was a detriment to his position as prime minister.

5. She will always be a flower child.

6. Although the pressed has dubbed her “Maggie T.,” she prefers to be called Margaret, not Maggie.

Here are some photos of Margaret Trudeau at Indigo. 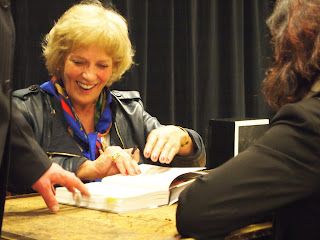 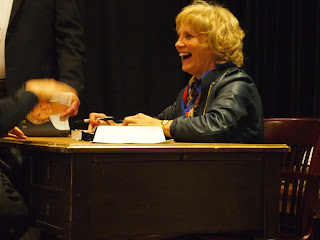 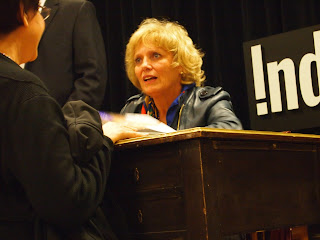 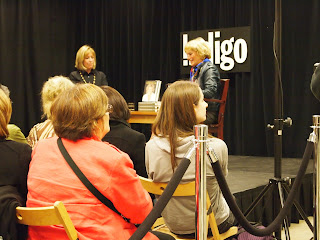 All right, Leaf fans, contain yourself. Don’t get too excited yet. If you’re like this now, what are you going to be like if they actually win a playoff game? I know, I know. The Blue and White won their third game in a row last night. With Jonas Gustavsson in goal, they defeated the Pittsburgh Penguins 4-3 at the new arena in Pittsburgh. The Pens have yet to win a game at their new digs with the ugly corporate name, the Consol Energy Center. Perhaps the fans will just call it The Igloo.