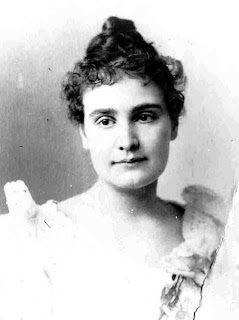 Yesterday was the 75th anniversary of the death of Helen Keller's teacher.  Johanna "Anne" Mansfield Sullivan Macy, better known as Annie Sullivan.  She died on October 20, 1936 in Forest Hills, New York at the age of 70.  A woman of considerable accomplishment and one who overcame a great deal of adversity in her life, Annie Sullivan should be remembered for being much more than Helen Keller's mentor.

Anne was born in Feeding Hills, Massachusetts on April 14, 1866.  Her parents, Thomas Sullivan and Alice Cloesie, were poor Irish immigrant farmers.  Anne was the eldest of  their five children, two of whom survived into adulthood.  Thomas was an abusive alcoholic and Alice, who suffered from tuberculosis, died in 1874.

In February of 1876, the motherless Anne and her brother Jimmie were sent to an almshouse for the poor in the town of Tewksbury, Mass.  Another sibling, Mary, went to live with an aunt.  Shortly after his arrival in Tewksbury, Jimmie Sullivan died of tuberculosis in the almshouse (which today serves as a hospital).

Anne, meanwhile, struggled with her eyesight.  In her childhood, she had developed trachoma, a bacterial infection of the eyes.  The infection went untreated and Anne was left with almost no vision.  After two operations failed to restore her sight, Sullivan pleaded to be sent to the Perkins Institute for the Blind in Boston.  She was extremely frustrated by the miserable conditions and lack of formal educational facilities at the Tewksbury poorhouse.  The place was overcrowded and underfunded.

In 1880, due to the intervention of Frank B. Sanborn, who had visited Tesksbury on behalf of the State Board of Charities, Anne was admitted to the Perkins Institute.  At the age of 15, she underwent another surgery which restored some of her vision.  She remained, however, visually impaired for the rest of her life.

After graduating from Perkins in 1886, Anne became the governess of an undisciplined six-year-old named Helen Keller.  She had no idea what an impact the little girl would have on her life and that they would become lifelong companions.  In fact Anne and Helen were to spend the next 49 years together.

Helen Adams Keller was born in Tuscumbia, Alabama on June 27, 1880.  Helen was not born blind and deaf.  When she was almost two years old, however, she contracted an illness that robbed her of her sight and hearing.  The nature of the illness remains undetermined, but it might have been scarlet fever or meningitis.

Anne Sullivan arrived at Helen's home in Alabama on March 3, 1887.  Sullivan was compelled to teach Helen lessons in obedience before familiarizing her with Braille alphabets.  She also instructed her student in manual sign language and taught Helen that everything had a name by spelling words into her hand.

Tutoring Helen Keller was most certainly a challenge.  The youngster was rebellious and angry.  Yet Anne was able to reach this hitherto unreachable blind, deaf and mute child.  She was truly a miracle worker because she found a way to communicate with an extremely difficult pupil.

In May of 1888, Anne, Helen and Helen's mother (Kate Adams Keller) visited Alexander Graham Bell and met with President Grover Cleveland at the White House.  They also visited Anagnos at the Perkins Institute where Helen was regarded as a "guest" of the school.

After Perkins, Anne Sullivan and Helen Keller spent several years in New York trying to develop Helen's lip reading and oral speech at the Wright-Humasun School for the Deaf.  Although Helen's speech improved, she was never able to speak clearly.  Nevertheless, she strongly desired a college education.  In 1896, therefore, she entered the Cambridge School for Young Ladies to prepare for her college entrance examinations. 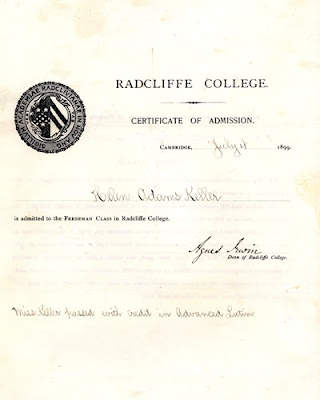 On May 3, 1905 Anne married a Harvard University instructor named John Albert Macy.  Macy was a literary critic whose best known book is The Spirit of American Literature.  He had befriended Anne and Helen during their Radcliffe years and had edited Helen Keller's autobiography, The Story of My Life, which was published in 1903.  When they wed, Anne was 39 years old and Macy was 28.  The couple shared a home in Wrentham, Massachusetts along with Helen.

During this time, John Macy introduced Helen Keller to socialist thought and in 1909 she became a member of the Socialist Party of Massachusetts.  Anne,, however, did not share their enthusiasm for change through political means.  In her 1955 memoir Teacher: Anne Sullivan Macy, Helen wrote that Anne was "never a standard-bearer, except in the sense that she fought against all man-wrought limitation as a crime, and held freedom of mind, conscience and inquiry as sacred."

It was Helen Keller who emerged as an outspoken social and political activist.  In addition to embracing socialism, she became an ardent suffragette and supporter of women's equality.  She was also a dedicated pacifist and vehemently denounced war.

In 1908, Helen Keller composed The World I Live In, a collection of essays in which she reveals her her impressions of her world, through her senses and her imagination.  Two years later, her poem, The Song of the Stone, was published.  John Macy played an instrumental role in the publication of both.  Of his contribution to her literary endeavours, Helen said, "I can not enumerate the helpful kindness with which he smoothed my rugged paths of endeavour."

In February of 1913, with the household facing financial pressures, Anne and Helen embarked on a 15-month lecture tour of the Northeast in an effort to supplement their income from Helen's writing.  It was about this time that the marriage of Anne and John really began to disintegrate. In May of 1913, Macy travelled to Europe alone and by 1914, the two were separated.  They never legally divorced, however, and Macy requested money from Anne after their separation.  John Albert Macy died in Strondsburg, Pennsylvania on August 26, 1932.  He was 55 years old at the time of his death.

After the departure of Anne's husband, A young Scotswoman named Polly Thomson (often spelled "Thompson") joined the household as Helen's secretary.  Polly, who died on March 21, 1960, remained with Helen after Anne's death.  In October of 1917, Helen and Anne sold their farm in Wrentham and moved to Forest Hills, New York.

During World War I, Anne and Helen travelled extensively, speaking out in opposition to the war and lending their support to blind and injured soldiers.  After the war, they found themselves in financial trouble.  Their hopes of a hit Hollywood film were scuttled when the silent film on Keller's life, Deliverance, failed to attract audiences.

In order to meet their expenses, the two women began a career in vaudeville.  With some reluctance, they booked a tour on the Orpheum circuit and prepared for appearances throughout the United States and into Canada.  Their first performance took place in February 1920 at Keith's Palace Theater in New York.  The light-hearted act was highly successful, and with some breaks, continued until 1924.

Annie Sullivan's eyesight steadily deteriorated and she and Helen began working for the American Foundation for the Blind in 1924.  Anne's right eye was removed in June of 1929.  The next year, Anne, Helen and Polly travelled abroad for the first time.  The trio visited Scotland, Ireland and England for over six months.  By 1935, Anne was blind again.and her health had severely declined.  She passed away in 1936 after suffering from a heart ailment.

Upon Annie Sullivan's death, Helen paid this tribute to her:

Teacher free at last from the pain and blindness.  I pray for strength to endure the silent dark until she smiles upon me again.

Beginning in January of 1943, Helen Keller visited blind, deaf and disabled World War II soldiers.  These visits had a profound effect on her and she described them as "the crowning experience of my life."

Helen and Polly Thomson made their first world tour on behalf on behalf of the American Foundation for the Overseas Blind (AFOB) in 1946, visiting London, Paris, Greece, Italy and Scotland.  Over the next 11 years, they visited 35 countries on five continents in support of this cause.  Helen Keller suffered a a series of strokes in 1961 and spent the last years of her life confined to Arcan Ridge, her home in Easton, Connecticut. She died there peacefully in her sleep on June 1, 1968 at the age of 87.

To watch some rare 1930 newsreel footage of Annie Sullivan and Helen Keller, click on the link below.  It is really quite remarkable.