Where was Hawaiian pizza created? 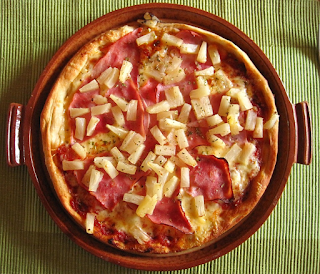 Have you ever wondered about the origin of Hawaiian pizza?  Was it actually invented in Hawaii?  Not at all.  That would be far too easy.  So, it must have originated in a tropical location..  How about a Caribbean island?  Wrong again.   Then it must have been created in Italy, you say.  Not even close. It was invented in a place where there aren't any pineapple trees at all.  It was actually invented here in Canada, of all places.  If you don't like Hawaiian Pizza (some people consider it "sacrilegious," then I guess you can blame it on the True North.  It seems that Hawaiian pizza is very polarizing.  Pizza purists don''t think pineapple belongs on pizza and don't consider it pizza at all.  Others think it adds a sweet, savoury flavour.

Let's look at the history of Hawaiian pizza.  A Greek immigrant to Canada, Sam Panopoulos is credited with serving the first Hawaiian pizza at the Satellite restaurant in Chatham, Ontario.  Back in 1962, Panopoulos experimented with adding ham, bacon and other toppings on pizza, including pineapple.  He felt that this sweet and savory combination would be very pleasing to the tastebuds.

Sotiros "Sam" Panopoulos was born on August 20, 1934 in Vourvoura, Greece. Sam and his brothers, Elias and Nikitas, immigrated to Canada in 1954 aboard a boat.  On the way, the boat stopped in Naples, Italy, where 20-year-old Sam tasted pizza for the first time and became fascinated by it.

Sam arrived in Halifax, Nova Scotia and then moved to Sudbury Ontario.  He later went to Elliott Lake, Ontario, where he worked in the mines.  Once in Canada, he still wondered why pizza was not more popular in his adopted country.  His next move was to Windsor, Ontario, where he observed how chefs in that city made their pies.

In a 2015 interview with Atlas Obscura, Panopoulos remarked on how unfamiliar Canadians were with pizza back then.  "Pizza wasn't known at all," he stated.  "Even Toronto didn't know anything about pizza in those days.  The only place you could have pizza was Detroit."

By the early 1960s, Sam and his brothers had opened the Satellite in Chatham, Ontario and Sam's gastronomic experimentation led to the creation of the Hawaiian pizza.


Sam Panopoulos eventually settled in London, Ontario, where passed away on June 8, 2017.  He was 82 years old at the time of his death.

* In Germany, Hawaiian pizza considered to be a believed a variation of Toast Hawaii, the ham, pineapple and cheese sandwich popularized by Germany's first television cook. Clemens Wilmenrod, in the 1950s.  Toast Hawaii is an open sandwich which consists of a slice  of toast with ham and melted cheese, topped by a maraschino cherry in the middle.


* In February of 2017, President Guoni Johannesson of Iceland caused a flap when he told schoolchildren that pineapple does not belong on pizza and suggested that Hawaiian pizza should be banned.  Johannesson's comments led to such an online culinary controversy that Canada's prime minister, Justin Trudeau, even got into the act, tweeting that "I have a pineapple.  I have a pizza.  And I stand behind this delicious Southwestern Ontario creation."  CBC Radio  called up Sam Panopoulos for his reaction on its As It Happens program.  Sam defended his invention, but was only mildly offended.  He emphasized that he had no patent on Hawaiian pizza and that since nobody owned the name, it could not be illegal.

CBC Radio received the following statement from President Johannesson: "I like pineapples, just not on pizza.  I do not have the power to make laws which forbid people to put pineapple on their pizza.  I am glad that I do not hold such power.  Presidents should not have such power.  I would not want to hold this position if I could pass laws forbidding that which I don't like.  I would not want to live in such a country.  For pizzas, I recommend seafood."