Amelia Earhart and reflections on courage 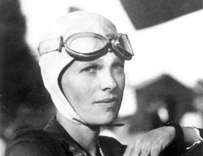 Courage is the price that
Life exacts for granting peace.

The soul that knows it not
Knows no release from little things:
Knows not the livid loneliness of fear,
Nor mountain heights where bitter joy can hear
The sound of wings.

Nor can life grant us boon of living, compensate
For dull gray ugliness and pregnant hate
Unless we dare
The soul's dominion.
Each time we make a choice, we pay
With courage to behold the resistless day,
And count it fair.


This poem by famed aviator Amelia Earhart first appeared in a 1928 issue of Survey Graphic magazine. It certainly reflects her adventurous spitit.  The poem, titled "Courage",  was published in an article called “Who is Amelia Earhart?” by Marian Perkings. The topic for this February day is courage. Amelia had plenty of it.

Here are some more reflections on courage.

Courage is rightly esteemed the first of human qualities because as has been said, it is the quality which guarantees all others.


Courage is not simply one of the virtues but the form of every virtue at the testing point.

- Ernest Hemingway
(When asked what he meant by “guts”, in an interview with Dorothy Parker in the New Yorker, November 30, 1929)


UPDATE ON THE MYSTERY OF AMELIA EARHART’S DISAPPEARANCE

On January 29, 2011, I wrote about the July 2, 1937 disappearance of celebrated aviator Amelia Earhart. Earhart and her navigator, Fred Noonan, disappeared during their attempt to circumnavigate the globe at the equator. The pair left New Guinea in a twin-engine airplane over 74 years ago and never returned. Their destination was a small island in the central Pacific Ocean called Howland Island.

According to a February 21, 2011 Canadian Press story, a scientist at Simon Fraser University in British Columbia hopes to extract Amelia Earhart’s DNA. Doongya Yang, a forensic archeologist, is endeavouring to create a genetic profile that can be used to determine whether bone fragments recently discovered on the remote, uninhabited Pacific island of Nikumaroro.

Yang became involved in the research at the behest of a Simon Fraser health student named Justin Long. Long’s grandfather, Elgen Long, is considered an authority on Amelia Earhart and owns a collection of about 400 of her letters. Earhart’s letters have been opened with letter openers, leaving the seals intact to capture DNA. Justin Long revealed that Yang will be testing four letters, including one written by George Palmer Putnam, Amelia’s husband. This way he will be able to have comparison DNA of someone close to Earhart in the event that the letters were sealed by someone else.

Elgen Long is 88 years old and has devoted about forty years collecting Amelia Earhart items. He even possesses some of her clothing. Unfortunately, DNA cannot be extracted from Amelia’s attire because it has been dry cleaned. The elder Long noted, however, that Earhart has some surviving relatives whose DNA could also be matched with Yang’s findings.

Interestingly, Justin Long doubts that the remains found on the island of Nikumaoro are those of Amelia Earhart. He said, “It is extremely unlikely because ocean currents don’t support any debris or people floating in that direction. And it’s 653 kilometres away from where Earhart’s destination was in the Pacific, which was Howland Island.”

The intriguing mystery of Amelia Earhart continues. Number 16, will keep you posted.

The Toronto Blue Jays, in my opinion, did the right thing in signing Jose Bautista to a multi-year contract. Yes, it’s definitely a risk, but it’s one that’s worth taking. Even if his home run production decreases considerably, his value to the team cannot be measured entirely with statistics. His leadership qualities are needed. Now, Mr. Anthopoulos, go ahead and get a decent third baseman so that Jose can play in the outfield.