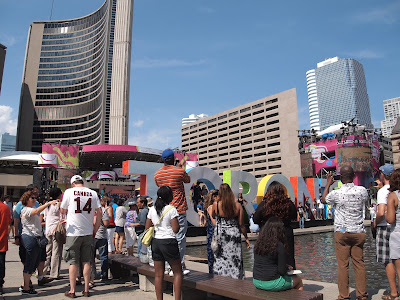 Torontonians are not known for giving themselves a pat on the back.  We have a reputation for being highly critical of ourselves and quick to find fault with our city.  We can hardly believe it when we do something well.  Therefore, it was somewhat of a shock to us that the 2015 Toronto Pan American Games turned out to be such a success.  We were fine hosts, if I do say so myself.

Last Sunday afternoon, on the last day of the games, I strolled around City Hall and Nathan Phillips Square, enjoying the beautiful summer weather and all that sunshine.  I saw the "TORONTO" sign and listened to some steel band music (By the way, I think the "TORONTO" sign should remain.  It is lively and colourful.  It has the potential be a great landmark for the city).  Oh yes, and just so you won't think I'm only focused on Toronto, I must say that Hamilton and other locations in Ontario's Golden Horseshoe deserve congratulations for their efforts.

Here are some photos from Sunday afternoon.  I hope you enjoy them. 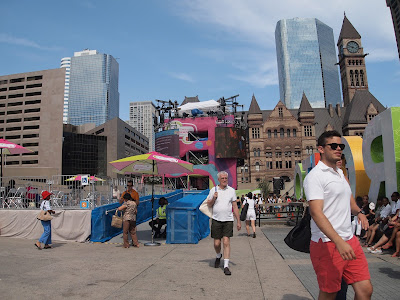 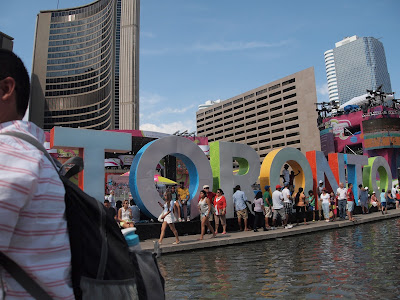 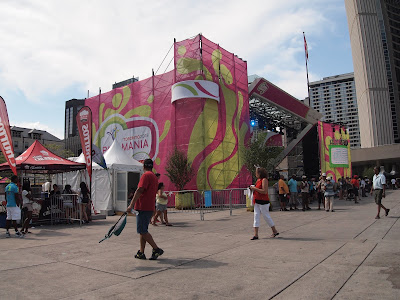 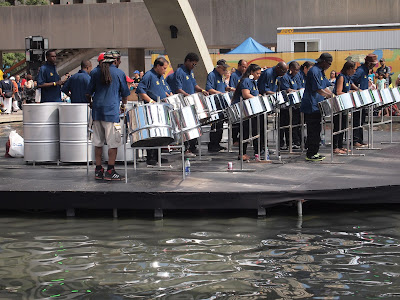 Is climate change a moral issue? 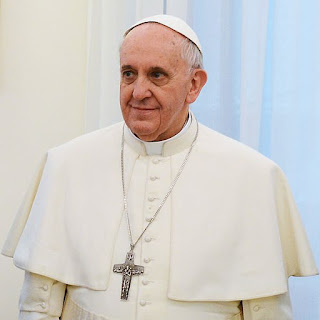 Pope Francis' extraordinary encyclical letter on the environment, entitled Laudato Si' (Praise Be to You), was published on June 18, 2015.  The pope's critique on climate change and consumerism has caused a stir, receiving both approval and condemnation.  Here are some excerpts from Laudato Si', which is subtitled On care for our common home.

We know that technology based on the use of highly polluting fossil fuels - especially coal, but also oil and, to a lessee degree, gas - needs to be progressively replaced without delay. (paragraph 136)

Because of us, thousands of species will no longer give glory to God by their very existence. nor convey their message to us.  We have no such right. (paragraph 33)

A technology severed from ethics will not easily be able to limit its own power. (paragraph 136)

Men and women of our postmodern world run the risk of rampant individualism, and many problems of society are connected with today's self-centred culture of instant gratification. (paragraph 162)


Not surprisingly, the most vigorous opposition to the papal encyclical has come from conservative Republicans in the United States.

I hope I’m not going to get castigated for saying this by my priest back home, but I don’t get economic policy from my bishops or my cardinal or my pope.  I think religion ought to be about making us better as people and less about things that end up getting in the political realm.”

. . . the church has gotten it wrong a few times on science, and I think that we probably are better off leaving science to the scientists and focusing on what we do – what we’re really good at, which is – which is theology and morality.”

IS CLIMATE CHANGE A MORAL ISSUE?

Exponents of religions are most appreciated when they're deemed to be irrelevant.  As long as they stick to rituals and officiate at life-cycle events they can count on popular support. But when they criticize the injustices of their day by articulating their religious convictions they're likely to be accused of meddling in politics.


Is climate change a moral issue?  Well, first of all, let us define "moral."  According to the Merriam-Webster Dictionary, moral is an adjective and it means "concerning or relating to what is right or wrong in human behaviour."  By that definition, climate change is one of the most important moral issues of our time. Human behaviour with regard to the environment is absolutely a matter of ethics.

It is simply not right and not just to destroy the planet's ecosystem.  The suffering and the destruction wrought by pollution and greenhouse gases is truly unconscionable.  It is immoral to leave such a legacy to future generations.

Global warming and climate change are very real.  The evidence is overwhelming. Almost every day, the news is filled with stories of floods, forest fires, heat waves and erratic weather conditions. Species are disappearing and the Arctic ice is melting at an alarming right.  In January, the state of California faced a drought of such unprecedented severity that Governor Jerry Brown declared a State of Emergency.  State officials were instructed to to make all necessary preparations for water shortages. In May of this year, an intense heat wave hit India, resulting in 2,330 deaths as of June 2, 2015 (according to report by CNN).

Humans, by their use of fossil fuels, have greatly contributed to climate change.  The proliferation of climate change refugees is a sad commentary on the early 21st century. Unfortunately, the oil industry and right-wing thinkers can't or won't see the truth.  U.S. Tea Party Republicans continue to deny climate change.  Conservatives here in Canada, especially our own prime minister, Stephen Harper, consider the environment a bothersome topic.  It is an impediment that they would prefer to sweep under a rug.  That is why Harper has muzzled scientists and scorned "radical environmentalists."


In the United States, Jeb Bush and Rick Santorum, both Republican presidential candidates and both Catholics, were highly critical of Pope Francis' encyclical.  In essence, they told the pontiff to mind his own business, although, of course, they used more diplomatic language.  In his first official day on the presidential campaign, Bush declared at a town hall event in New Hampshire that Pope Francis should not involve himself in global affairs.

The energy industry also wasted no time in expressing  its disapproval of the pope's encyclical. On June 17, 2015, prior to the release of Laudato Si', Tom Altmeyer, a lobbyist for Arch Coal, one of America’s largest coal mining companies, sent an email to the U.S. Congress.  The email chastised the spiritual leader of the world's Roman Catholics for failing to promote fossil fuels as a solution to "global energy poverty."

In a June 7, 2015 interview on Fox News Sunday, Rick Santorum discussed climate change with journalist Chris Wallace,  Wallace questioned him about the extent of the pope's moral authority with regard to climate change.  The former Pennsylvania senator replied, ""that's important but I think there are more pressing problems confronting the earth than climate change."

When Santorum dismissed climate change as a problem not worthy of the pope's most urgent consideration, Wallace challenged him fiercely.  "If the pope can't talk about climate change." he asked, "why can you?"  In response to Santorum's  decree that science should be left to the scientists, Wallace pointed out that neither was Santorum a scientist.

Actually, Pope Francis has more claim to a scientific background than Rick Santorum.  According to a June 3, 2015 article in the National Catholic Reporter, Francis (then known as Jorge Bergoglio), studied chemistry and worked as a chemist before entering the seminary, although he does not hold Master's degree in chemistry as some press sources have stated.  The article, by Jesuit Fr. Thomas Reese, author of Inside the Vatican: The Politics and Organization of the Catholic Church, states that Bergoglio graduated with "título in chemistry from the Escuela Técnica Industrial No. 12*, which is a state-run technical secondary school in Argentina (in the Argentine system titulo is the same term used for a secondary diploma or a university degree).

The Catholic Church, of course, does not have a spotless record in matters of science.  For example, take the the case of 17th century astronomer/physicist Galileo Galilei.  The Italian was persecuted for subscribing to the Copernican theory of the solar system (that the planets orbit the sun. not the earth). It was not until October 31 1992, after a 13-year investigation, that the church, under Pope John Paul II, formally pardoned Galileo of any wrongdoing and finally acknowledged its grievous error with regard to its treatment of him . This time, however, Pope Francis is on the right side of history.  The Republican Flat Earth Society and other climate change deniers are woefully mistaken.  There is more than enough scientific evidence to prove them wrong.  It's just that the evidence is not convenient for them. It does not fit their right wing political agenda.

When the pope speaks about climate change and its effects on the most vulnerable people in the poorest countries, he has every right to do so.  Indeed, it would be a dereliction of his duty as a spiritual leader if he failed to condemn environmental degradation or lend his support to the impoverished masses.  Francis made it clear in his encyclical, that he was not only speaking to his Catholic faithful, but that he was addressing all of humanity, believers and non-believers alike.

On September 24, 2015, Pope Francis is scheduled to become the first head of the Roman Catholic Church to address a joint session of the United States Congress.  According to BBC News, about one third of the members of Congress are Catholic, including the Speaker of the House of Representatives, Republican John Boehner, and minority leader Nancy Pelosi, a Democrat.  Given that the Republicans have control of both the House and the Senate, the pope's speech should be extremely interesting.