A family member sent me the following two related true stories.  I found them fascinating and I would like to share them with readers of Number 16.

Many years ago, Al Capone virtually owned Chicago. Capone wasn't famous for anything heroic. He was notorious for enmeshing the Windy City in everything from bootlegging booze, prostitution, buying crooked politicians, to murder.

Capone had a lawyer nicknamed "Easy Eddie." He was Capone's lawyer and confidant for a good reason. Eddie was very good! In fact, Eddie's skills at legal maneuvering kept Big Al out of jail for a long time.

To show his appreciation, Capone paid him very well... Not only was the money big, but Eddie got special dividends, as well. He and his family lived in a free fenced-in mansion with live-in help and all the modern conveniences of the day. The estate was so large that it filled an entire Chicago City block. Eddie lived the high life of the Chicago mob and gave little consideration to the atrocities that went on around him.

Eddie did have one soft spot, however. He had a son he loved dearly. Eddie saw to it that his young son had clothes, cars, and a good education. Nothing was withheld; price was no object. And, despite his involvement with organized crime, Eddie tried to teach him right from wrong and to be a much better man than he was.

Yet, with all his wealth and influence, there were two things he couldn't give his son; he couldn't pass on a good name or decent life examples.

One day, Easy Eddie reached a difficult life-changing decision. His conscience got the best of him. He wanted to make up for his misdeeds and rectify the many wrongs he had done defending the Chicago mobs.

He went to the authorities and told what he knew about Al "Scarface" Capone. His thought was to clean up his bad name and reputation, and to offer his son some semblance of integrity and disciplines. To do this, he had to testify against The Mob and he knew the costs could be great. So, he testified and provided evidence against Al Capone and The Chicago Mob.

In less than a year, Easy Eddie's life ended in a blaze of gunfire on a Chicago street. He had given his son the greatest gift he had to offer; at the greatest price he would ever pay... Police found a rosary, a crucifix, a religious medallion, and a poem cut from a magazine in his pockets.

The poem read:
"The clock of life is wound but once, and no man has the power to tell just when the hands will stop, at late or early hour. Now is the only time you own. Live, love, toil with a will. Place no faith in time. For the clock may soon be still."

World War II produced many heroes. One such man was Navy Lt. Commander Butch O'Hare. He was a fighter pilot assigned to the aircraft carrier Lexington in the South Pacific.

One day all the squadrons were sent out on a mission. Sometime after take-off, he glanced at his fuel gauge and saw that the air crew must have forgotten to top off his fuel tanks. He would not have enough fuel to get to the mission targets and back.


His flight leader ordered him to return to the carrier. Reluctantly, he dropped out of formation and headed back to the fleet. On the way back, he was shocked to see a squadron of Japanese aircraft speeding in the direction of the American fleet.

All of the American fighters were gone on the mission and the fleet was all but virtually defenseless except for their guns. He couldn't contact his squadron to bring them back in time to save the fleet or could he warn the fleet of the approaching danger. There was only one thing to do. He decided to try to divert the enemy from the fleet.

Putting aside all thoughts of personal safety, he dove into the formation of Japanese planes. His wing-mounted 50 caliber's blazed as he charged in, attacking one surprised enemy plane and then another. Butch wove in and out of the broken formation and fired at as many planes as possible until all his ammunition was gone.

Undaunted, he continued the assault. He still dove at the planes, trying to clip a wing or tail in hopes of damaging as many enemy planes as possible, making them unfit to fly. Finally, the exasperated Japanese squadron took off in another direction.

Butch O'Hare and his shot-up fighter managed to limp back to the carrier. Upon landing, he immediately reported the attack during his return.. The gun-cameras mounted on his plane told the tale. It showed the extent of Butch's daring attempt to protect the fleet. He had, in fact, shot down five enemy aircraft. This took place on February 20, 1942. For his heroic actions, Butch became the Navy's first Ace of WWII, and the first Naval Aviator to win the Medal of Honor.

A year later Butch was shot down and killed in aerial combat at the age of 29. His hometown didn’t allow the memory of this WW II hero to fade and named O'Hare airport in Chicago in tribute to the courage of this great man and WWII Navy ace.

(Below is a photo of Butch O'Hare, wearing tie and vest, standing in the cockpit of a Grumman F4F Wildcat) 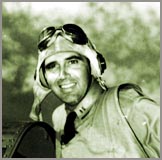 So, if you ever find yourself at O'Hare International in Chicago, give some thought to visiting Butch's memorial that displays his statue and Medal of Honor. It's located between Terminals 1 and 2.


SO, WHAT DO THESE TWO STORIES HAVE TO DO WITH EACH OTHER?

* Butch O'Hare's was born Edward Henry O'Hare in St. Louis, Missouri, of Irish and German descent. He was the son of Edward Joseph O'Hare, also known as "Easy Eddie."  When Butch's parents divorced in 1927, Butch and his sister remained in St. Louis, while their lawyer father moved to Chicago and worked with Al Capone.

* On October 17, 1931, Al Capone was sentenced to 11 years in prison for tax evasion.  He was also fined $80,000.  Capone began serving his time at the U.S. Penitentiary in Atlanta, Georgia.  After accusations that he was receiving special treatment, he was transferred to the maximum security lockup at Alcatraz Island in San Francisco Bay.

Due to failing health, Al Capone was released from prison on November 16, 1939.  He was referred to Johns Hopkins Hospital in Baltimore for treatment of  paralytic dementia, caused by late-stage syphilis.  Hopkins refused to admit him due to his reputation as a bigtime mobster.   However, he was accepted at at another Baltimore hospital, Union Memorial.

On March 20, 1940, a very ill Al Capone, left Baltimore for Palm Island, Florida, where he spent the remaining years of his life.  In 1942, Capone became one of the first  American patients to be treated with penicillin, after mass production of the drug was begun in the United States.  Penicillin slowed down the progression of his disease, but it was too late to rehearse the damage to his brain.

On January 25, 1947, Al Capone died at his Palm Island home, after suffering a stroke and heart failure.  He was 48 years old at the time of his death.

Posted by Joanne at 6:16 PM No comments: