Turks and Caicos: Canada's place in the sun? 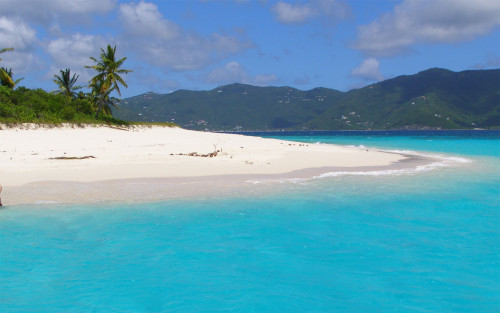 How does an eleventh Canadian province in the Caribbean sound?  Imagine the magnificent palm trees swaying in the breeze. Picture the turquoise waters and the sandy beaches!  It's not just a dream.  It's in the realm of possibility and it could happen. The island paradise known as Turks and Caicos may someday be a part of Canada.  You may think it's a no-brainer. Why wouldn't Canadians want a place in the sun?  Well, believe it or not, there are some drawbacks and complications.

The notion of Canada annexing Turks and Caicos has been around for a long time.  Sir Robert Borden, Canadian Prime Minister from 1911 until 1920, first suggested the idea back in 1917.  He visited the archipelago that year and was convinced that it would be the right location for Canada's next province.  At the end of World War I, Borden tried to persuade Great Britain to relinquish some of its possessions in the Western Hemisphere, including Turks and Caicos, to Canada.  His overture was clearly rebuffed by British Prime Minister David Lloyd George at the 1919 Paris Peace Conference.  Nearly a century has passed and the annexation of the islands hasn't happened,  Why not?  Well, first a little background on Turks and Caicos.

The Turks and Caicos Islands are currently a British Overseas Territory or Crown Colony.  The territory consists of 40 islands and cays, including the larger Caicos Islands and the smaller Turks Islands.  Only eight of the islands are inhabited.and the majority of the population live on Providenciales in the Caicos Islands.   It is located 250 kilometres (155 miles) east of Cuba, technically in the Atlantic Ocean, not the Caribbean Sea.  English is the official language and the population also speaks Turks and Caicos Creole.  It is situated in the Eastern Standard Time Zone and the U.S. dollar is the official currency.  According to the Official Tourism Website of The Turks and Caicos Islands, the average temperature ranges 29-32 degrees Celsius (85-90 degrees Fahrenheit) from June to October and 27-29 degrees Celsuis (80 to 84 degrees Fahrenheit) from November to May.  On average, Turks and Caicos enjoys 350 days of sunshine.  Hurricane season lasts from the beginning of June until the end of November.  There are about 30,000 permanent residents on the islands.  Turks and Caicos Islanders are mainly descendants of Africans who laboured in the salt pans or the cotton plantations.

In 1974, New Democrat MP Max Saltsman attempted use a private member's bill to persuade the Canadian government to annex the Turks and Caicos Islands.  He argued that it would be beneficial for Canadians to spend their money in a tropical climate on Canadian soil.  Saltsman's proposal, however, was never put to a vote.  Due to Saltsman's initiative, however, the Canadian government studied the question for the first time.  It reached the conclusion that changing the status of Turks and Caicos from a British protectorate to a Canadian protectorate would not be beneficial and that Canada should not alter its borders.

The 1974 statement remains the government's position on this issue. There is no strong movement in any Caribbean state, including Turks and Caicos, to join Canada. The financial cost to Canada of administering, maintaining, defending and providing social programs to an island or group of islands is likely to outweigh revenue that could be generated from tourism or from corporate and income taxes. Furthermore, extension into the Caribbean could damage Canada's international relations by financially favouring a small number of people over their neighbours.

Progressive Conservative MP Dan McKenzie brought forth the idea again in 1986 but it was turned down by his party's caucus committee on external affairs in 1987. The committee, chaired by MP David Daubney, based its decision on such factors as  immigration, banking, health care and tourism.

In 1988, members of the government of Turks and Caicos expressed a desire to establish a special relationship with Canada.  At the time, however, Canadians were preoccupied with the issue of whether to have free trade with the United States.  Turks and Caicos was overshadowed by the heated debate over free trade.

In 2004, the province of Nova Scotia voted to invite Turks and Caicos to become part of the province in the event that the islands ever joined with Canada.  This would circumvent all the difficulties and red tape associated with admitting an new province.

Peter Goldring, a Conservative MP representing the Alberta riding of Edmonton East, is a vocal advocate of the annexation of Turks and Caicos.  He sees annexation as a platform for Canada in the Caribbean Rim region and a vehicle for increased foreign trade.  In 2004, Golding visited the islands on a fact-finding tour.  He drafted a motion requesting that the Canadian government explore the issue, but his party turned it down for the same reasons Dan Mckenzie's initiative was rejected n 1987.

Opposition to the annexation of Turks and Caicos is based on several factors.  Critics fear that it would lead to increased illegal immigration from the Caribbean region.  Another factor is, of course, economic. There are doubts that the territory would be a financial asset to Canada.  Furthermore, its currency is the U.S. dollar.  It is also hurricane prone, something that cannot be taken lightly in this era of climate change.

How do the people of Turks and Caicos feel about the prospect of joining Canada?  In the 1990s, support for integration of the islands with Canada stood at a lofty 90%.  By 2003, it had fallen to about 60%.  The islands were hit hard by the Great Recession of 2008..  In 2009, the economy of Turks and Caicos was in such poor shape and reports of government corruption were so widespread that the British government asserted direct control of the colony and paid the cost for its essential services.  Nevertheless, Peter Goldring continues to promote the annexation of the islands.  On June 26, 2013, he met with Rufus Ewing, the premier of Turks and Caicos at the Westin Harbour Castle Hotel in Toronto.

When asked by the National Post about his meeting with Ewing, Goldring replied, "He was definitely interested in pursuing an economic association, and he’s looking for my type of help to work with Members of Parliament to get some momentum going to see if we can’t maybe get him a meeting with cabinet members to look at what some of these economic interests might be. The difficulty is that they’re a territory of Great Britain, so of course you would want to do things in concert with and with sensitivities to what Great Britain’s interests are."

Goldring told the Post that he supports full provincial status for Turks and Caicos.  He noted that with today's technology and modern travel, the islands are actually closer to Ottawa than his own Edmonton riding.  He also argued that the people of the islands would reap the benefits of economic development by joining Confederation and he cited the example of a causeway joining the islands.


EDITORS UPDATE (April 7, 2016): In 2014, Peter Goldring continued to advocate for the annexation of Turks and Caicos.  He told Global News that it "would be good for business if we were to develop a good strong relationship and maybe even a marriage." Turks and Caicos premier Rufus Ewing appeared open to the idea.  However, John Baird, former foreign affairs minister in the Stephen Harper government, nixed the initiative.

Peter Godring has retired and is no long a Member of Parliament.  In his last speech in the House of Commons, he described his Turks and Caicos dream as "a work in progress."  The dream is making headlines again in 2016.  A proposal that a federal NDP government should promote the annexation of Turks and Caiscos as Canada's eleventh province will be put forward at the New Democratic Party's convention in Edmonton, Alberta this weekend (April 8-10, 2016).  The resolution calls upon NDP members to engage with legislators, the island's  inhabitants and the British government in an effort to make the British overseas territory a part of Canada.

Former NDP strategist Robin Sears doesn't think it's going to happen. He was quoted by Andrew Russel of Global News as saying,“One of the reasons the idea continues to be popular is because there is this thing called winter in Canada,”  According to Sears,“It would require the Queen being willing to transfer one of her assets to us and I don’t think that is very likely."  “But it’s a nice fairy tale.”

Sears is right that creating an eleventh province will not be easy to achieve.  There is also the prospect of a constitutional amendment to overcome.  Yet we Canadians will continue to hope, won't we?  After all, some people thought it would be impossible to unite a large and diverse British territory into a country called Canada.
Posted by Joanne at 6:22 PM No comments: