Boxing Day: All about the day after Christmas 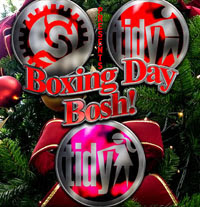 My mother and my nephew were both born on the day after Christmas.  It is, therefore, a very special day in my family.  The British and people of many other nations, including we Canadians, refer to it as "Boxing Day."   In old England, it was a custom for servants and the lower classes to approach employees and patrons with a Christmas box on December 26th in order to solicit money.  In modern times, Boxing Day has become a day of frenzied shopping for bargains for many.


Today is the birth anniversary of Mao Zedong, also known as Chairman Mao.  The Chinese Communist revolutionary was born on December 26, 1893.  In 1949, he established  the People's Republic of China and was appointed its Chairman.  Mao ruled the nation for over 33 years until his death on September 9, 1976 at the age of 82.


Popular American wrestler Gorgeous George died on December 26. 1963 at the age of 48.  His real name was George Raymond Wagner and he was known for his flamboyance.  In 1962 he retired from wrestling on the advice of his doctors.  He had been diagnosed with a serious liver condition brought on by alcohol abuse.  The following year, on Christmas Eve, Gorgeous George suffered a heart attack.  He passed away two days later.


Harry S. Truman, 33rd President of the United States passed away on December 26, 1972.  Truman, who served as President from 1945 until 1953, died in Kansas City, Missouri at the age of 88.  He had been admitted to hospital with pneumonia and later developed multiple organ failure.


Comedian Jack Benny passed away on December 26, 1974 in Beverly Hills, California.  He was 80 years old and had been diagnosed with inoperable pancreatic cancer.


December 26th is a significant day for java lovers.  On December 26, 1865, the first United States patent for a coffee percolator was issued to inventor James Mason of Franklin, Massachusetts.  Mason's percolator, however, still used a downflow method without rising steam.  It should also be noted that the percolating coffee pot was invented by British scientist and solder Sir Benjamin Thompson (Count Rumford) who lived from 1753 until 1814.