ENOUGH IS ENOUGH, NHL! Bettman and the league bury their heads in the sand 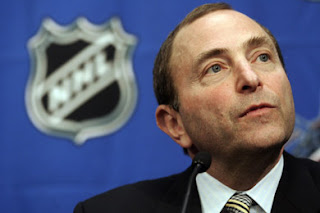 I grew up in Toronto as an avid hockey fan and an ardent supporter of the Maple Leafs. The Blue and White have always been my team. Now, however, I am thoroughly disgusted with the National Hockey League and its Commissioner, Gary Bettman. I am also appalled by the ownership, management and coaching style of the Leafs, but that’s another story.

During Gary Bettman's 18 year tenure as head of the NHL, the number of teams in the NHL has grown from 24 to 30.  Overall revenues have increased significantly. The league has also lost its soul.  Something is rotten at its very core.

The Almighty Buck has ruined professional sport to a great extent, but hockey more than most. There are too many teams and too many games and the playoffs are far too long. Unlike baseball, hockey is not designed to be played four or five times a week. Baseball moves at a slower pace and starting pitchers play every fifth game.

The product has been diluted and it is often watered down to a shadow of its former glory. As long as money controls the game, that is not going to change. Those of us of a certain age, however, remember a time when almost every game was special and important.

Professional hockey has always been rough, but now it is becoming downright perilous. It is quickly and inexorably turning Roller Derby on ice. For me, this latest incident involving Boston Bruins defenceman Zdeno Chara is the final straw. On Tuesday, March 8, at the Bell Centre, Chara, a 6 foot 9 inch giant of a man, hit Montreal Canadiens left winger Max Pacioretty into the boards. Pacioretty was severely injured. His head slammed into the metal support holding up the glass. He was knocked out cold and collapsed to the ice.

Max Pacioretty found himself in the hospital with a broken vertebra and serious concussion. He was released yesterday. Zdeno Chara received a five-minute major penalty and a game misconduct. He was not, unfortunately, suspended by the league. On Wednesday, the NHL ruled that Chara would receive no further discipline.

Commissioner Bettman does not see a problem. According to Bettman, “Our hockey operations people are extraordinarily comfortable with the decision that they made.” Yesterday, during an appearance before a U.S. congressional panel, he declared that there is no need to “over-legislate” head hits. He also suggested that the increase in reported concussions is a result of accidental collisions, not head hits.

Well, of course, Mr. Commissioner, that has to be the reason. Under your stewardship, Gary, the NHL has no problems whatsoever. Its franchises in Atlanta and Phoenix and Nashville are doing extraordinarily well. It’s unfortunate Sidney Crosby, the league’s biggest star suffered a concussion, but it’s all part of the game. Don’t worry, be happy!

Despite the NHL’s delusions, the Pacioretty/Chara story is far from over. Montreal police are investigating the incident and there is the possibility that Chara could be charged with assault. In a letter addressed to Bettman, Air Canada has expressed its extreme displeasure with the NHL. I am pleased that the airline, which just happens to be one of the NHL’s largest financial corporate backers, has threatened to remove its sponsorship of the league if it doesn’t take “immediate” and “serious” action on headshots.

Geoff Molson, chairman and owner of the Montreal Canadiens, has stated that he does not agree with the NHL’s decision. Prime Minister Stephen Harper, to his credit, has urged the league to assess the “growing number” of serious injuries and headshots.

What has to happen for the NHL to take this seriously? What will it require to awaken Gary Bettman and the league from their stupor? Does a player have to die? Is that what it will take? Sadly, I’m beginning to think so. Then again, maybe even a death won't wake them up. They may just repeat their usual mantra that it’s part of the game.