The desire to perform a work which will endure, which will survive him, is the origin of man’s superiority over all other living creatures here below. It is this which has established his dominion, and this which justifies it, over all the world. 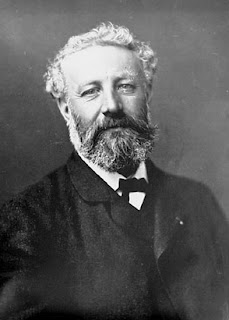 Jules Verne certainly created works which will endure. Verne, the “Father of Science Fiction”, was born on February 8, 1828, exactly 183 years ago today. He was a French novelist from the Brittany region. His most notable works are Twenty Thousand Leagues Under the Sea (1870), A Journey to the Center of the Earth (1864) and Around the World in Eighty Days (1873).

Jules Gabriel Verne was born in the city of Nantes, the eldest of the five children of Sophie Henriette Allotte de la Fuye and Pierre Verne. His father, Pierre, was a lawyer. Nantes is a maritime port city and the young Jules spent his summers observing the schooners on the Loire River where he cultivated a great imagination for travel and adventure.

In 1847, Verne went to Paris, ostensibly to follow in his father’s footsteps and study law. Although he obtained his law degree in 1850, he was much more interested in the theatre. His first play, Broken Straws was produced in 1850. He continued to write comedies and operas and had short stories published in a popular magazine.

On January 10, 1857, Jules married Honorine de Viane Morel, a widow with two daughters named Suzanne and Valentine. The couple had one child together, Michel Verne, born in 1861. Verne and his wife did much travelling together. They did toured France and America extensively, and they visited the British Isles. During his travels, Verne became acquainted with fellow authors Alexandre Dumas and his son, and Victor Hugo. They offered him writing advice.

Verne’s big break came when he met Pierre-Jules Hetzel, one of the leading editors and publishers in France in the 19th century. With Hetzel’s help, Verne’s first novel, Five Weeks in a Balloon, was published in January of 1863 to wide acclaim. It was the account of a journey by air over central Africa, a largely unexplored area of the continent at the time.

Jules Verne was in his forties when he wrote his two masterpieces, are Twenty Thousand Leagues Under the Sea and Around the World in Eighty Days. In March of 1886, he was shot twice by his deranged 25-year-old nephew, Gaston. One bullet missed, but the other entered his left leg. As a result, he was left with a permanent limp. This great pioneer of the science fiction genre died in Amiens, France on November 24, 1905. He was 77 years old. He was a true visionary of the future and imagined many modern devices and technological inventions from skyscrapers to submarines.

What do you get when a bunch of rabbits chase some cars?

As regular readers of Number 16 know, I have a great fondness for palindromes – words, verses, numbers or sentences that read the same backward or forward. From now on, Tuesday is going to be palindrome day on this website. I will feature ten new palindromes whenever I publish a posting on A Tuesday.

Here are your ten palindromes for today.

1. Never odd or even

Phil Kessel of the Toronto Maple Leafs does not like the spotlight, but it shining right on him at the moment. He’s young and he’s under a lot of pressure, but his performance has been lacklustre. He has definitely not lived up to expectations this season. The Leafs have much invested in him. I don’t think they can throw in the towel yet.

There are many questions for Toronto Blue Jay fans today, and much to ponder. The team is trying to unload outfielder Juan Rivera whom they obtained in the Vernon Wells trade. They certainly need a third baseman. Michael Young, disgruntled third baseman for the Texas Ranger, once to be traded. As sportswriter Richard Griffin of the Toronto Star pointed out in his January 26, 2011 column, a trade for Michael Young would be a logical move for the Jays. Can GM Alex Anthopoulos pull of the deal? If not, the Jays still need a third baseman. Jose Bautista should be in the outfield where he is happiest.

Joanne
Posted by Joanne at 1:27 PM No comments: