Brian Sicknick: The Capitol Police officer who was killed in the storming of the U.S. Capitol 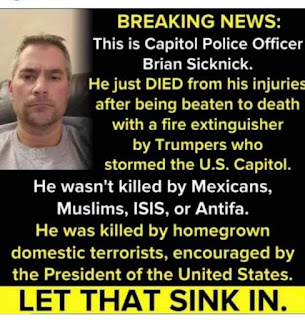 Capitol Police Officer Brian D. Sicknick died at 9:30 p.m. on January 7, 2021.  Let's not forget that name.  Let's not forget that face.  Sicknick died protecting others.  He died defending democracy from an unruly mob of neo-Nazis. far-right extremists and white supremacists.  He died in hospital from the injuries he sustained in the violent siege on Capitol Hill on January 6th.  Authorities say he was injured "while "physically engaging" with rioters.  Two law enforcement officers informed The Associated Press that Officer Sicknick was hit on the head with a fire extinguisher during the riot.
Sicknick was 42 years old when he lost his life.  He was from South River, New Jersey and he was the youngest of three sons.  In 2008, he joined the Capitol Police.  According to s biography issued by his family, Officer Sicknick is survived by his parents, Gladys and Charles Sicknick, his brothers Ken and Craig, and his longtime girlfriend, Sandra Garza.  In his leisure time, Sicknick rescued and tended to dachshunds. He was also a fan of the New Jersey Devils hockey team.
Officer Sicknick's death. at the hands of pro-Trump insurgents, is being investigated as a homicide.  A good man is dead because Donald Trump tried to subvert democracy.  Trump could not and would not accept defeat in the November 3, 2020 election.  He urged his followers to go to Washington and to be tough.  On January 6th, his supporters shouted that they were in the Capitol at the invitation of the president.  This what four years of Trumpism in the United States has brought to bear.  How sad and disgraceful!  America, is this where you want to be? Is this the image of you that you want the world to see?   Josh Hawley and Ted Cruz, what would you say to Officer Sicknick's grieving family?
- Joanne
Posted by Joanne at 3:09 PM No comments: