Greta Thunberg versus the alpha males 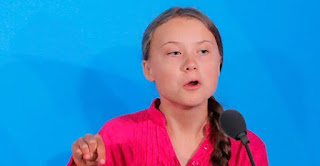 "Thunberg began a global movement by skipping school: early in August 2018, she spent her days camped out in front of the Swedish Parliament, holding a sign painted in black letters on a white background that read Skolstrejk for klimatet: School Strike for Climate.  In the sixteen months since, she has addressed heads of state at the U.N., met with the Pope, sparred with the President of the United States and inspired 4 million people to join the global climate strike on September 20, 2019, in what was the largest climate demonstration in human history." 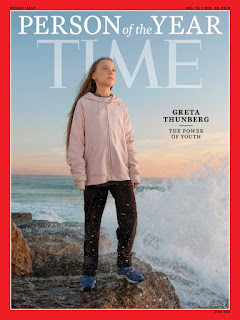 Both Greta Thunberg and U.S. President Donald Trump illustrate the "power of one," but the contrast between them could not be starker.  Greta has singularly changed the world for the better, while Trump has done substantial damage to the world.  Trump has used the power of the American presidency to influence

16-year-old Greta speaks not only for her generation, but for all those who are concerned about the future of life on this planet.  She is an inspiration.  She has shown the world's young people that they can make a difference.  On September 23, 2019,  she opened the United Nations Climate Action Summit with a stirring denunciation of world leaders for failing to take strong measures to combat the climate crisis. "People are suffering, people are dying; entire ecosystems are collapsing," Greta said.  "We are in the beginning of a mass extinction and all you can talk about is money and fairy tales of eternal economic growth." Then she accused world leaders of stealing her dreams with "their empty words" but added that she considered herself "one of the lucky ones."  When she thundered, "How dare you?" her words echoed powerfully around the world.

Greta's determination and her sense of purpose are truly admirable, especially when you consider that she has been diagnosed with Asperger's Syndrome, a neurological disorder characterized by difficulty with social skills and nonverbal communication.  Asperger's is one of a group of autism spectrum disorders, but it has not held Greta back.  In fact, she claims to have benefitted from it.  She calls it her "superpower."  So, every autistic person can be inspired by Greta's achievements and her attitude.

As for Donald Trump, he has no concern for the environment.  He has taken steps to exclude the United States from the Paris climate accord and he has actively encouraged the revival of the coal mining industry, Trump has also removed Obama era environmental protections.  His son, Donald Jr., recently shot and killed an endangered sheep during a hunting expedition in Mongolia.  The species is the largest sheep in the world and it is revered for its giant curving horns.

Not surprisingly, Trump Sr. has had the audacity to attack and bully Greta T, a child.  She makes him uncomfortable because she speaks the truth and he lies.  In September, on the same day that Greta delivered her impassioned speech at the United Nations, the president sarcastically referred to her as "a very happy young girl looking forward to a bright and wonderful future."

Greta has never spoken to Trump face to face.  However, when she crossed paths with him at UN headquarters before her speech, she glared at him (Se photo below).

Donald Trump, ever the narcissist, was jealous that Time chose Greta as" Person of the Year."  He dismissed her award with a snarky tweet.  He wrote: "So ridiculous.  Greta must work on her Anger Management problem, then go to a good old fashioned movie with her friends.  Chill Greta, Chill!"  Greta responded to the president's patronizing message by changing her biog on Twitter to "A teenager working on her anger management problem.  Currently chilling and watching a good old fashioned movie with a friend."

Donald Trump is not the only right-wing world leader who has also made some patronizing remarks about the Swedish teen.  On October 2, 20919, Vladimir Putin, Russia's authoritarian president, declared that he didn't "share exultation about Greta Thunberg."" He suggested that Greta may have been manipulated by others.  Putin described Greta as "kind and sincere girl" who doesn't understand complex global interests such as the barriers to cleaner energy in developing countries."  He said "it's deplorable when someone is using children and teenagers in their interests."  In response, Greta changed her Twitter bio to read: "A kind but poorly informed teenager."

Brazil's president, Jair Bolsonaro labelled Greta Thunberg "a brat" after she denounced violence against indigenous people who were killed in the Amazon.  On Sunday, December 6, 2019, Greta posted a video showing the aftermath of a drive-by shooting leaving two Indigenous leaders dead.  Alongside the video she tweeted: "Indigenous people are literally being murdered for trying to protect the forest from illegal deforestation.  Over and over again, it's shameful that the world remains silent about this."

Outside the presidential palace in Brasilia, Brazil's capital, a smirking Bolsonaro reacted to Greta's comments by telling reporters that Greta "has said that the Indians have died because they were defending the Amazon.  It's amazing that the press gives space to this kind of pirralha (a derogatory Portuguese word meaning 'brat')."

So there you have it.  Three authoritarian world leaders, all who consider themselves alpha males seem threatened by a 16-year-old schoolgirl from Sweden and her many supporters around the globe.  Could it be that this trio of right-wing strongmen are actually afraid of the truth and the light?  Do they fear that their perfidy will be uncovered for all the world to see?

The world needs more Greta Thunberg and less Donald Trump, Vladimir Putin and Jair Bolsonaro.  Since Greta is being criticized by that dastardly troika, she must be doing something right.