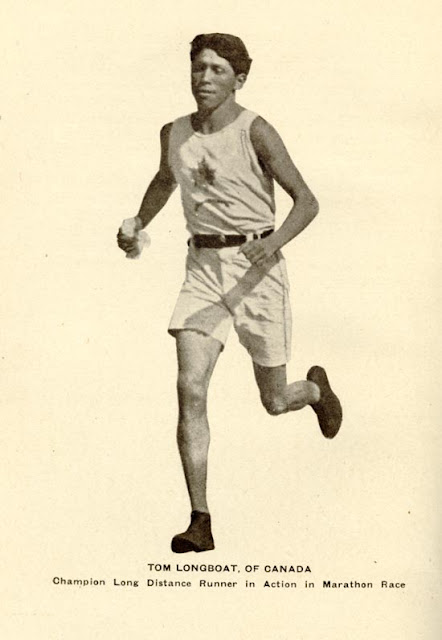 Though most young Canadians have never heard of Tom Longboat, in the early 20th century he was one of the most famous athletes in the western world.


Thomas Charles Longboat, one of the greatest athletes to wear the Maple Leaf, was born at the Six Nations Reserve in Ohsweken, Ontario (near Brantford), His birth date has been disputed, but it is generally thought to be June 4, 1887 (Some sources, including The Canadian Encyclopedia), state that he was born on July 4, 1887, while others cite June 4, 1886).  If the June 4th, 1887 date is correct, then the celebrated long distance runner came into this world 129 years ago today.  He was a member of the Onondaga people, one of the original five constituent nations of the Iroquois.  His native name was Cogwagee, which means "Everything."

Tom Longboat was the second of three children and his father died when he was five years old.  At about 12 years of age, he was enrolled at the Mohawk Institute Residential School, where he was pressured to relinquish his native culture and language. Longboat deeply resented the school and escaped to the home of his uncle.  In later years, when he was invited to speak at the institute, he remarked with disdain, "I wouldn't even send my dog to that place."

Longboat began racing competitively in the spring of 1905 when he ran in the Victoria Day Race at Caledonia, Ontario.  He was noticed by another Six Nations runner, Bill Davis, who had finished second in the 1901 Boston Marathon.  Davis was impressed with Longboat's athletic talent and they began training together in preparation for the Around the Bay Road Race in Hamilton, Ontario.  On October 18, 1906. Longboat won the Hamilton event by over three minutes.  It was his first significant competitive victory.

On April 19, 1907, at the age of 19, Tom Longboat competed in the prestigious Boston Marathon against 123 other runners.  It was a cold and rainy day, but throngs of people lined the streets to witness the event.  Longboat won the world-renowned race in spectacular fashion, setting a new course record that was five minutes faster than the previous one and earning himself international recognition.

Here is the front page of the Boston Post with its headline on the 1907 Boston Marathon. 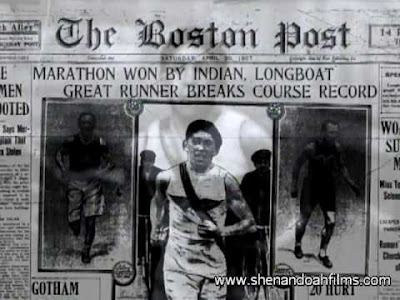 Here are two excerpts from the Boston Globe's report on the 1907 Boston Marathon.

FASTEST MARATHON EVER RUN WON BY LONGBOAT
RECORD CLIPPED BY INDIAN YOUTH
Caffrey's Time Improved by About Five Minutes
Fowler, Himself a Mark-Shaver, Half-Mile Behind at Finish

Thomas Longboat, a full-blooded Indian from Hamilton, Ont., won the famous B.A.A. Marathon race of 25 miles from Ashland to Boston yesterday in 2h 24m 24s, beating the record for the course 2h 29m 23 3-5s, which was made by J.J. Caffrey, also of Hamilton, in 1901, when the latter won the race for the second time.

The thousands of persons who lined the streets from Ashland to the B.A.A. were well repaid for the hours of waiting in the rain and chilly winter weather, for they saw in Tom Longboat the most marvelous runner who has ever sped over our roads. With a smile for everyone, he raced along and at the finish he looked anything but like a youth who had covered more miles in a couple of hours than the average man walks in a week. Gaining speed with each stride, encouraged by the wild shouts of the multitude, the bronze-colored youth with jet black hair and eyes, long, lithe body and spindle legs, swept toward the goal.

After his victory in Boston Marathon, Tom Longboat focused his attention on the 1908 Olympics in London, England. Unfortunately, the 1908 Olympics marathon ended in heartbreak and disappointment for the young competitor.  It was a hot day and the route was a lengthy 26.2 miles. Longboat and some other participants collapsed from exhaustion, including Italian runner, Dorando Pietri.  Longboat was in second place when he collapsed near the 20-mile mark. He was forced to leave the race. Pietri's collapse occurred in the final metres of the race, when he was leading the field. After receiving assistance from officials, he was able to cross the finish line in first place. American Johnny Hayes, who had finished second, protested the results.  Pietri was subsequently disqualified.and Hayes was awarded the gold medal.

Below is a photo of Tom Lomboat (No. 72), leading the pack at the 1908 Olympics in London as the runners leave Windsor Castle.  Behind Longboat is Dorando Pietri (No. 19)/ 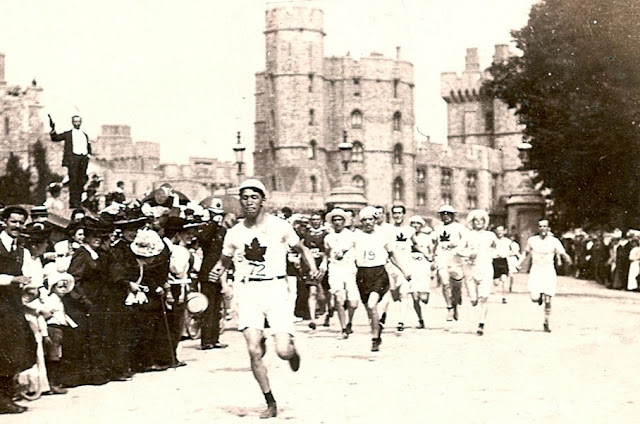 After the Olympics, Tom Longboat decided to turn professional, competing indoors for prize money. As a professional, Tom became king of the match-race circuit at a time when there was a public craze for long-distance running.  On December 15, 1908, he challenged Dorando Pietri, who had already beaten Johnny Hayes in a rematch between the two.  The setting was Madison Square Garden in New York City. With six laps left, Pietri collapsed and had to be removed from the track.

On December 28, 1908, Tom Longboat married Lauretta Maracle, a Mohawk school teacher on the Tyendinaga Reserve. The ceremony was held on stage at Massey Hall in Toronto.  Soon after, on February 6, 1909, he went head to head with prominent British runner Alfred "Alfie" Shrubb in a contest to determine "the World's Professional Marathon Champion."  Their highly-publicized showdown took place at Madison Square Garden before a sold-out crowd of 12,000 and it was billed as the race of the century.  Shrubb took a ten-lap lead, but Longboat, came from behind to pass him and win the race.

Alfie Shrubb became Longboat's greatest rival on the circuit.  The two engaged in a number of match races in front of enormous crowds with Longboat besting Shrubb at distances over 20 miles and Scrubb winning the shorter races.


In 1911, after some much-publicized disagreements with his managers, Longboat bought out his own contract.  He was determined to use his own training methods, although he was criticized for his supposedly relaxed attitude.  In fact, his one-time trainer, Mike Flanagan, had walked out on him before his showdown with Alfie Schrubb, telling the Globe that Longboat was "the most contrary piece of furniture I have ever had anything to do with."  Despite the criticism, Longboat continued to have success as a professional.  By about 1912, however, the public's passion for marathon running began to fade and the outbreak of an international conflict,in 1914 changed everything.

In February of 1916, Tom Longboat enlisted in World War I.  During the war, he served as a dispatch runner for the 107th Pioneer Battalion in France, assigned to the dangerous task of delivering messages and orders between units.  He kept in competitive shape by  racing in inter-battalion sporting contests (He won the eight-mile-long race at the Canadian Corps Dominion Day celebrations).  According to Veterans Affairs Canada, Longboat was wounded twice during his service overseas. However, the injuries were not mentioned in his military service record. 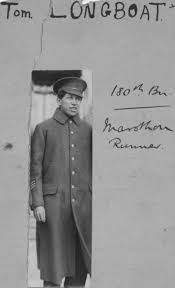 Despite having been mistakenly reported dead, Tom Longboat managed to survive the war.  He was discharged in 1919, but upon returning home he soon discovered that his wife, Lauretta, believing him to be deceased, had remarried.  According to David Blaikie, author of Boston: The Canadian Story, Lauretta chose to remain in her new marriage,  Longboat later wed Martha Silversmith, an Onondagan, with whom he had four children.  According to a piece on the website of the Loyal American Hall of Honour, Bay of Quite Branch, Martha was the sister of Canadian First Nations actor Jay Silverheels, who portrayed Tonto in the old Lone Ranger television series.  Silverheels was born Harry J. Smith at the Six Nations Reserve near Brantford.  He was also known as Harry Silversmith.

After the war, Tom Longboat moved out west to secure a land grant in recognition for his military service.  He settled near Edmonton, Alberta, where he was a homesteader and performed odd jobs.  In 1922, he returned to Toronto. At first, he worked for the Dunlop Rubber Co. and then at steel mills in Hamilton and Buffalo.  He was laid of in 1926, but soon found employment with the City of Toronto's street-cleaning department.  According to an article by Peter Unwin in Canada's History magazine, Longboat toiled at that job "faithfully for 19 years"  He "drove horses, swept leaves, and collected garbage."

Tragedy hit the Longboat and his family in 1932.  Following Tom's participation in a radio interview at the Canadian National Exhibition , his five-year-old son, Clifford, was struck by a car and killed. Unwin's article in Canada's History states that the child's mother, Martha, saved the CNE pennant she had bought that day and kept it for the remainder of her life.

In 1944, Tom Longboat retired to the Six Nations Reserve where he died of pneumonia on January 9, 1949 at the age of 61 or 62.  Roger Robinson, I think, summed up Longboat's achievements best when he wrote the following in Canadian Runner magazine (May 16, 2014):

Tom Longboat was he only Canadian distance runner so far to prove himself definitively as the world’s best, and he did it three times: once at Boston and twice at Madison Square Garden. But Longboat’s historical importance reaches beyond Canada. He was the first world-class non-white marathon runner.

* Alfie Shrubb went on to coach the Harvard University cross-country team and the Oxford University Athletics Club.  Interestingly enough, he settled permanently in Canada in 1928, making his home in Bowmanville, Ontario.  He died in Bowmanville on April 23, 1964 at the age of 84.  The

* After his disqualification from the 1998 Olympics marathon, Dorando Pietri was awarded a gilded silver cup by Britain's Queen Alexandra.

* During World War II, Tom Longboat served as a member of the Veterans Guard and was stationed
at a military camp near Brantford, Ontario.