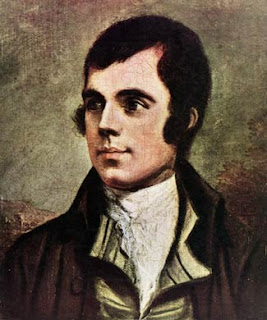 Today is Robbie Burns Day. It is the 252nd anniversary of the birth of the great bard of Scotland.  The day of his birth celebrated throughout the world as Burns Night with Burns Suppers, poems and songs.

Robert Burns was born on January 25, 1759 at Alloway, Ayrshire, Scotland, the eldest of the seven children of William Burnes, a poor tenant farmer, and Agnes Broun (Robert spelled his name “Burnes” until 1784). Much of his youth was spent working on his father’s farm. Although poor, Robert was well-read. His father, a self-educated man, schooled his children in reading, writing, arithmetic, history and geography. William insisted that young Robert receive a good education and sent him and his younger brother, Gilbert, to a tutor named John Murdoch. Murdoch taught the boys Latin, French and mathematics.

As a teen, Robert wrote his first verse, My Handsome Nell, an ode to his first love. It begins with the line “O, once I lov’d a bonnie lass, Aye and I love her still”. His inspiration was Nelly Kirkpartrick, the daughter of a blacksmith and his companion in the labours of the harvest field.

He eventually left the farm and settled in Edinburgh where he associated with artists and writers. Burns was accepted by the cream of the Edinburgh literati and gained popularity.  The first edition of his poetry was published in 1786.  It was entitled Poems and was witten mainly in the Scottish dialect.  It sold out within a month.

In 1788, Robert married Jean Armour. She bore nine children, only three of whom lived to adulthood. Sadly, Robert Burns lived only until the age of 37. He suffered from ill health, possibly a rheumatic heart condition, and died on July 21, 1796. His funeral occurred on the very day that Jean gave birth to their last son, Maxwell. Jean lived on until 1834.

A kind of sausage, haggis consists of sheep’s entrails minced with onion, oatmeal, suet, spices, and salt, mixed with stock. It is traditionally simmered in the animal’s stomach for about three hours, although most modern commercial haggis is prepared in a casing instead of the actual stomach of the animal. Haggis is served as the main course at Robbie Burns suppers. Haggis is usually served with “neeps” and “tatties” (turnips and mashed potatoes). 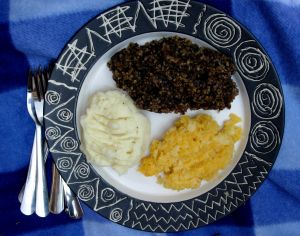 I have to admit that I have only tried Haggis once and I didn’t particularly like it. To be fair though, I was probably influenced by its rather unappetizing description.

THE WORKS OF ROBERT BURNS ON iPHONE

A final note about Robbie Burns.  The government of Scotland is making his poetry easily accessible to the Facebook generation.  It recently unveiled a free new iPhone application for Burns fans.  The app contains a searchable data base of every poem written by Scotland's favourite son.  It also includes a brief summary of facts about the great poet.

How’s your Latin?  Here are ten Latin phrases. Can you translate them into English?

2. Pax vobiscum – Peace be with you

3. Ad astra per aspera – To the stars through adversity (motto of the state of Kansas)