In Praise of Libraries and Librarians : Who was the real Marian the Librarian?

I have always imagined Paradise as a kind of library.

In 1937 Jorge Luis Borges found employment as a cataloguer at the Miguel Cane branch of the Buenos Aires Municipal Library. There were not enough books to catalogue and Borge would often disappear into the basement to read, write and translate. When Juan Peron assumed power in Argentina in 1946, Borges lost his job. He was removed from his post due to his opposition to the Peron regime and his distaste for fascism. After the overthrow of Peron in 1955, Borges was appointed director of the National Library of Argentina. One of Jose Luis Borges’ most well known short stories, The Library of Babel (1941), portrays the universe as a vast, colossal library. It was inspired by his years of relentless cataloguing.

I have spent a large portion of my life working in a library. It is not surprising, therefore, that I have a great fondness for libraries and a tremendous appreciation for librarians. Most librarians possess a good sense of humour and the ability to laugh at themselves. Above all, they are truly dedicated to their profession.

Public libraries are more than storehouses of the world’s greatest literature. They are more than just rows of bookshelves. They are community centres, art galleries and free Internet Cafes. They have programs and displays for people of all ages and all walks of life. In this age of the Internet, they are needed more than ever.


QUOTES ABOUT LIBRARIES AND LIBRARIANS

No place affords a more striking conviction of the vanity of human hopes, than a public library.


A library is thought in cold storage.

In Batman comics, Barbara Gordon is the librarian daughter of Gotham City’s police commissioner, James Gordon. Barbara’s alter ego is Batgirl. Yvonne Craig played the role of Batgirl in the 1960s Batman television series. In 2004, the American Librarian Association (ALA) launched a “Librarians are heroes every day!” campaign featuring Barbara Gordon/Batgirl. The campaign included posters and bookmarks promoting the work of librarians. Here is how the ALA described the red-headed librarian superhero.

Gifted Barbara Gordon works at the Gotham Public Library during the day then takes to Gotham City’s crime-ridden streets as Batgirl at night. As a crimefighter, information is Barbara’s true weapon. Her near-perfect memory and never-ending energy make her a critical ally of Batman and all crimefighters.”

Katharine Hepburn played a reference librarian in the 1957 film Desk Set. Hepburn portrayed Bunny Watson, the head of the research department at a major television network. Bunny’s life is turned upside down when Richard Sumner (Spencer Tracy) arrives on the scene to observe daily activities in her department. Unknown to Bunny, Sumner has been assigned by the network president to introduce computers into some of the department’s functions. He has been given orders to keep his mission a secret. It is interesting to note that Desk Set opens with a grateful acknowledgement to International Business Machines (IBM) for its cooperation and assistance.

Meredith Wilson died on June 15, 1984. As for Marian Seeley, the most recent information I have found on her dates back to a November 16, 2008 article by Erica Hansen in the Desert News of Salt Lake City, Utah. In the article, the then 89-year-old Seeley is quoted as saying that she sometimes “gets tired of being “Marian the Librarian,” but generally “feels great” to have unwittingly contributed to the world of musical theatre. “How else could I feel? I’m a librarian and my name is Marian,” she told the Desert News.

To watch a video of Shirley Jones as Marian the Librarian in the 1962 film version of The Music Man, click on the link below.

Believe it or not, there is a Librarian Action Figure. Introduced in 2003 by Angus McPhee, it was designed to cash in on the stereotype of the librarian with horn-rimmed glasses and hair in a bun. Modelled after Nancy Pearl, a real-life librarian in the Seattle area, the Librarian Action Figure even has “amazing push button shushing action.” It is also comes with a little plastic book, an authentic-looking check-out card in a library sleeve, book marks and a Nancy Pearl trading card. Note: When I checked the Angus McPhee website, there was a message indicating that the product, which was selling for $8.95, was no longer available. 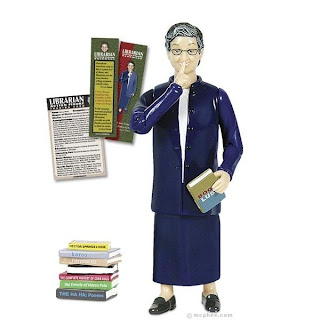 Nancy Pearl agreed to an interview with Angus McPhee. When asked about the shushing stereotype, she replied, “Every time that I think that we’re finally done with that, I meet someone who wants to tell me how awful she/he thinks it was, but at least it’s happening mush less often now than it did at first. Most librarians, and most people, I am glad to say, see the LAF as what it was – a real tribute to librarians and the work they do.”

To watch a video on the Library Action Figure, click on the link below.


DEWEY DECIMAL VERSUS LIBRARY OF CONGRESS

Let me state my bias. I am much more comfortable with the Dewey Decimal System than the Library of Congress System. Introduced by Melvil Dewey in 1876, it has been expanded and modified through the years. I prefer Dewey because, for example, if I need a history book, I simply go to the 900 classification. If I want works on philosophy and psychology, I go to the 100 classification. Yes, I realize the Library of Congress has many advocates, but my heart belongs to Dewey.

How come the librarian slipped and fell in the library?

Answer: Because she strayed into the non-fiction section.


What do you do when pets start eating your library books?

Answer: Take the words right out of their mouth.