Laura Secord: A Woman of Courage 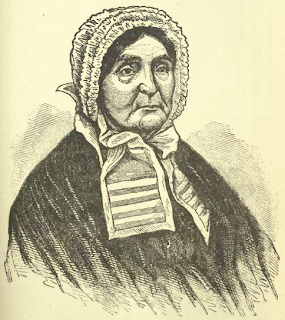 This is the face of a courageous woman.  It is not the portrait of the young Laura Secord that appears on the boxes and wrappers of the chocolate company that bears her name.  It is, however, the only authentic drawing of this heroic Canadian, though she lived to the ripe old age of 93.

Today is the 237th anniversary of Laura Secord's birth.  She was born Laura Ingersoll on September 13, 1775.in Great Barrington, Massachusetts, less than a year before the Americans declared their independence from Britain.  Her father, Thomas Ingersoll, supported the American revolutionaries during the War of Independence and he served as a lieutenant in the American militia from 1777 to 1781.

In 1793, Thomas Ingersoll and his family immigrated to Upper Canada after receiving a land grant of 27,000 hectares (66,000 acres) from Lieutenant Governor John Graves Simcoe.  Thomas named the new settlement Oxford-on-the-Thames.  Charles Ingersoll, Laura's younger brother, later renamed it "Ingersoll" in honour of his father,  In 1852, it was incorporated as the "Village of Ingersoll" and it is now the site of the town of Ingersoll, Ontario.

When the War of 1812 broke out, James Secord, a staunch United Empire Loyalist, served as a sergeant with the 1st Lincoln Militia.  On October 13, 1812, James was severely wounded in the Battle of Queeston Heights.  Upon hearing of her husband's wounding, Laura Secord immediately went to the battlefield and climbed the hill to search for him.  After finding him with his shoulder and knee bleeding profusely, she brought him home, dressed his wounds.and nursed him during his convalescence.  In short, she single-handedly saved his life.

In June of 1813, Queenston was occupied by American troops and James was still recuperating from his battle injuries.  The Secord family was forced to billet some American soldiers in their home. At that time, Laura learned of a planned American attack on a British outpost at Beaver Dams (near present-day Thorold, Ontario).  Since James was unfit to make the trip to warn the British, Laura  undertook the difficult journey herself.  Early on June 22, she set out for the stone house of United Empire Loyalist John De Cou, in Thorold Township, Upper Canada, near present-day Brock University.  During De Cou's absence, the house was being used as a British army detachment headquarters commanded by Lieutenant James FitzGibbon.


Laura's remarkable 30 kilometre (18 miles) journey was fraught with peril.  The terrain was rough and she had to take a circuitous rote in order to avoid Amrerican sentries.  She walked through the woods until she reached a Native encampment on the Twelve Mile Creek. The aboriginals escorted her to the British outpost where she delivered her message to Lieutenant FitzGibbon. Within days, FitzGibbon and his forces ambushed the Americans and they surrendered.  Although Laura Secord never revealed exactly how she obtained knowledge of the planned American attack, it is probable that the American soldiers were less discreet around her because she was a woman.

In 1828, James Secord was appointed registrar of the Niagara Surrogate Court and promoted to judge in 1883.  The Secords left Queenston in 1835 when James became a customs officer at the Port of Chippawa.  His new position came with a home  in the Village of Chippawa (part of present-day Niagara Falls).  Son Charles took over the Queenston home.

James died of a stroke on February 22, 1841 at the age of 67.  After her husband's death, Laura moved to a red brick cottage in Chippawa on Water St. (now a historic house at 3800 Bridgewater Street). She was quite destitute after James' death because his war pension had ceased and she was unable to make a profit from her land holdings.  In addition, Laura's own petition for military pension had been denied.

Laura Secord did not receive any official recognition for her bravery until she was 85 years old.   In 1860, Albert Edward, Prince of Wales (the future King Edward VII) visited Canada and Laura presented him with a memorial detailing her contribution. She added her signature to a list of War of 1812 veterans who had prepared to address him.  Upon returning to England, the prince sent her 100 pounds sterling for her service.  Laura Secord died at Chippawa on October 17, 1868 at the age of 93.  She is buried next to her husband in the Drummond Hill Cemetery in Niagara Falls, Ontario.

So how did Laura Secord's name become associated with a chocolate company?  In 1913, Frank P. O'Connor founded a small candy business on Toronto's Yonge Street.selling hand-made chocolates.  He expanded his business across Canada and into the United Stated.  In the United States, it is known as Fanny Farmer Candy Stores.  O'Connor said that he named his company after Laura Secord because she "was an icon of courage, devotion and loyalty."

In 1935, Frank P. O'Connor was appointed to the Senate of Canada where he served until his death on August 21, 1939 at the age of 54.  Senator O'Connor College School, a Catholic high school in Toronto, was named after him.


MY VISIT TO THE LAURA SECORD HOMESTEAD

During my visit to Niagara-on-the-Lake this past Labour Day weekend, I toured the Laura Secord Homestead at Queenston, the residence of  Laura Secord from 1803 to 1835.  Invading American soldiers looted the Secord house in October of 1812 during the Battle of Queenston Heights. Less than a year later, that same house was the starting point of Laura's celebrated journey to warn the British of a surprise attack.

In 1971, the Laura Secord Candy Company restored Laura's Queenston home with original furniture and gifted it to the Niagara Parks Commission in 1998.  It is located just off the Niagara Parkway, a short distance from the scenic Bruce Trail.

At the Laura Secord Homestead, a costumed tour guide provided me with much information about Secord and her family. The guide, a Brock University student, was very personable and answered all my queries.   The homestead is a great place to visit.  Next year there will be a re-enactment of Laura's historic trek to mark the 200th anniversary of the event on Saturday, June 22, 2013.

Here are some photos I took of some of the rooms in the Laura Secord Homestead. 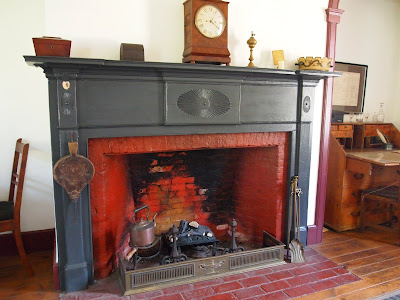 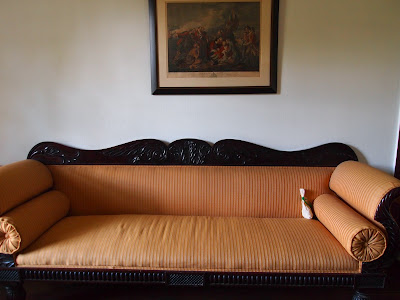 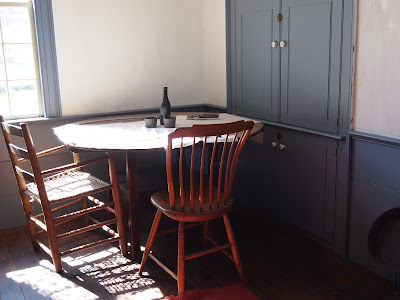 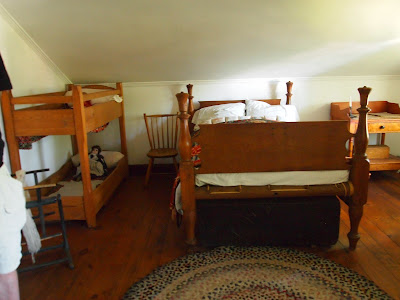 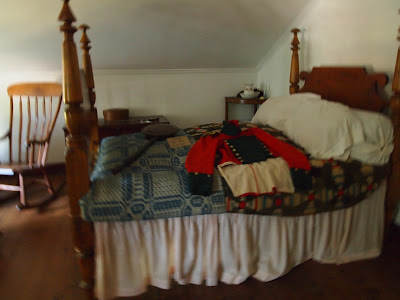 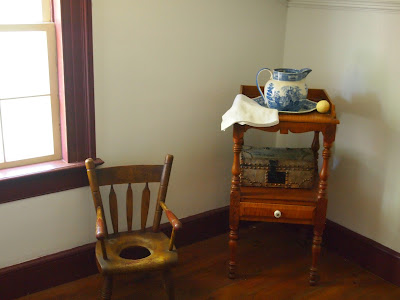