Fun with words: Malapropisms are amusing 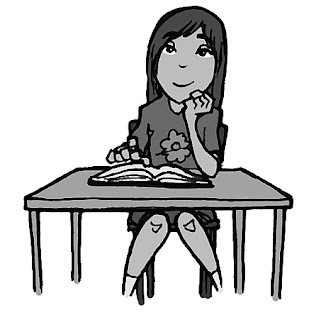 Definition of malapropism from the Merriam-Webster Dictionary

malapropism (noun): the usually unintentionally humorous misuse or distortion of a word or phrase especially : the use of a word sounding somewhat like the one intended but ludicrously wrong in the context

Example of a malapropism: "Don't is a contraption." (rather than "a contraction")

According to teacher Gay Miller of North Carolina on the website Book Units Teacher: Educational Material for Upper Elementary, the definition of "malapropism" has been clarified.  A malapropism must contain the following three features:

1.  The new word replacing the original must have a different meaning.

2.  The substituted word must have a similar sound to the original word.

3.  The word must be recognized in the speaker's native language.

The word comes from a character named Mrs. Malaprop in the play The Rivals (1775) by Richard Brinsley Sheridan (1751-1816), an Irish satirist, playwright and poet.  Mrs. Malaprop is a humorous aunt who becomes involved in the schemes and dreams of young lovers.  Throughout the play, she.  uses incorrect words to express herself.  Mrs. Malaprop's name is derived from the French term malapros, meaning "inappropriate."  The popularity of The Rivals led to the creation of the literary term "malapropism," meaning the use of an incorrect word, whether by accident or design, that sounds similar to the appropriate word.  The character committing the malapropism is usually somewhat silly or uneducated.


Here are some examples of Mrs. Malaprop's malapropisms:

". . . promise to forget this fellow. - to illiterate him, I say, quite from your memory." (obliterate)

"He is the very pine-apple of politeness." (pinnacle)

". . . behold this very day, I have interceded another letter from the fellow." (intercepted) 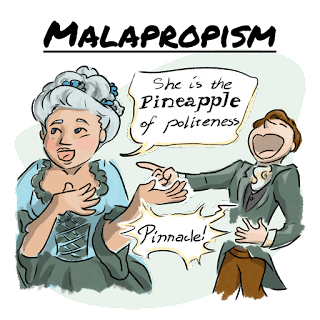 Malapropism is also referred to as Dogberryism, after the constable Dogberry, a comical character in William Shakespeare's Much Ado About Nothing.  In the play, he is the leader of a group of bumbling police watchmen and he frequently uses malapropisms.  For example  Dogberry says, "Our watch, sir, have indeed comprehended two auspicious persons."  He means to say "apprehended two suspicious persons."

Below is a depiction of Dogberry by English artist Henry Stacy Marks.(1829-1898). 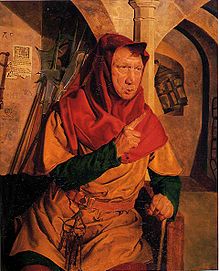 Other examples of malapropisms:

"Texas has a lot of electrical votes," - Attributed to baseball great Yogi Berra.(1925-2015)
(Although Yogi is given credit for many errors of the English language, he is also credited with many remarks that he never uttered.  He allegedly made the comment about Texas to then-Vice President George H.W. Bush, who was running for president and was throwing out the first pitch at a Houston Astros game (Yogi was then a coach for the Astros).  According to the story, Bush told Berra  that Texas is very important. and Berra replied, "I know, Texas has a lot of electrical votes," mistaking "electrical" for "electoral."  However, this conversation was never recorded in the Houston Chronicle or in any other newspaper.  The accuracy of the quotation remains uncertain and unverified). 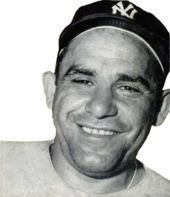 Yogi is credited with the following malapropisms:

"He hits from both sides of the plate.  He's amphibious," rather than "ambidextrous."

"Take it with a grin of salt," rather than "grain of salt."

"He had to use a fire distinguisher," instead of "extinguisher."

"He's a wolf in cheap clothing," rather than "sheep's clothing."

"I need five more to make my quotation for the month," instead of "quota."

"Michelangelo painted the Sixteenth Chapel," instead of "Sistine Chapel."

"Jesus healed the leopards," rather than "lepers."

"The doctor administered the anecdote," rather than "antidote."

Here is a selection of malapropisms from George W. Bush, 43rd President of the United States

"We are making steadfast progress," instead of "steady progress."

"It will take time to restore chaos and order," rather than "law and order."

"The law I sign today directs new funds . . . to the task of collecting vital intelligence . . . on weapons of mass production," rather than 'weapons of mass destruction."


In the 1933 film, Sons of the Desert, comedian Stan Laurel refers to a "nervous shakedown," rather than "nervous breakdown."  He also calls "the exalted ruler, "the exhausted ruler."

Archie Bunker, as played by Carroll O'Connor, on TV's All in the Family, was in the habit of using malapropisms.  Here are some sample's of Archie's way with words: 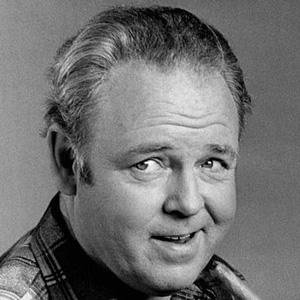 An "ivory shower" (rather than an ivory tower)

A house of "ill refute" (rather than ill repute)

"Nectarines of he god" (rather than nectar of the gods)