And nobody told Elvis Presley what to do ‘cause he was a very strong person and we had a great relationship. And I took care of mine. He’d take care of his. And he didn’t let anybody tell him what to do. 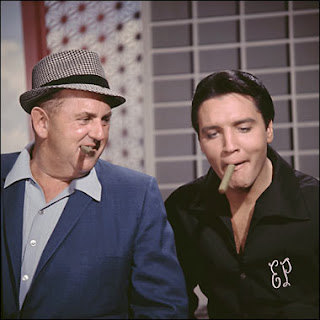 Colonel Thomas Andrew Parker, the man behind Elvis Presley, died on January 21, 1997, exactly 14 years ago today. He was a man of mystery and his name is quite deceiving. It sounds like the moniker of a Southern gentleman. However, Colonel Tom Parker was actually Dutch-born and his real name was Andreus Cornelius van Kuijk. He was not a true colonel either. In 1948, then-Louisiana governor Jimmie Davis bestowed the honorary title of “colonel” upon him.

Born in Breda, Netherlands on June 26, 1909, he was the seventh of eleven children. As a boy, he worked as a carnival barker in Breda. At the age of 18, he immigrated illegally to the United States to seek his fortune. After a year in the U.S., he went back to Holland briefly. In 1929, when he was 20, he returned to America and found employment with carnivals. He eventually enlisted in the U.S. army and assumed the name “Tom Parker” in order to cover up the fact that he was an illegal immigrant.

Tom Parker began his army career at Fort Saffer in Hawaii. In the fall of 1931, he and another private were transferred to Fort Barrancas in Florida. It was then that Parker decided to go AWOL for almost five months. He did return to the military base until February 17, 1933 and was charged with desertion. His punishment was solitary confinement where he developed a psychosis. As a result, he ended up in a mental hospital and was discharged from the army due to his lack of mental health. After his discharge, Parker returned to the carnival circuit and tried to pass himself off as a West Virginian. He finally settled in Tampa, Florida where he became director of Tampa’s Humane Society and Tampa’s chief dog officer.

By 1938, Tom Parker was a music promoter and he was guiding the career of popular singer Gene Austin. In the late 1940s, he worked with country music stars such as Minnie Pearl, Canadian singer Hank Snow and June Carter. This ultimately led to his involvement with Elvis Presley. In August of 1955, Parker booked Elvis as the opening act for Snow and it wasn’t long before he took control of the rising young singer’s career.

Parker soon acquired a controlling interest in Elvis Presley’s management contract. By November 21, 1955, he had negotiated a deal for RCA to acquire Presley’s contract from Sun Records for the then-lucrative sum of $35,000. Elvis received $5,000 from the deal.

Under the management of the cigar-chomping Colonel Parker, Elvis Presley went on to become a cultural icon of the 20th century. Parker remained Elvis’s manager until the singer’s death on August 16, 1977. Parker himself died in Las Vegas almost thirty years after the passing of his famous client. The “colonel” was 87 at the time of his passing.

To view a video of Colonel Tom Parker’s 1987 interview with Ted Koppel on Nightline, click on the link below.