The Mysterious Death of Alexander the Great 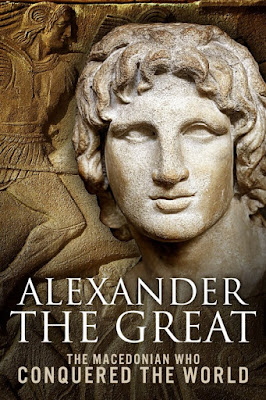 Alexander the Great may have conquered much of the ancient world, but he was not successful in living a long life.  In fact, he was only 32 years old when he died.  Death was the one thing, it seems, that he could not conquer with his military prowess.

Alexander III, was a Greek king of Macedon.  He was born in Pella, the affluent capital of the kingdom.  While a teenager, Alexander was tutored by the philosopher Aristotle.  He ascended the throne in 336 B.C. when his  father, Philip II, was assassinated by his chief bodyguard, a young Macedonian noble named Paunsanias of Orestes.  The assassination occurred at a wedding ceremony in Aegae, the old capital of Macedonia.

After his father's death, Alexander built one of the largest armies in the ancient world and created a huge empire that stretched from Greece to northwestern India.  He spread Greek culture and many places bore his name, the most famous being the city of Alexandria, Egypt.  It all came to an end, however, with his shocking and unexpected passing.

The exact cause of Alexander the Great's death remains unknown, although it has been the subject of scholarly debate for centuries.  His demise has been attributed to poison, malaria, typhoid fever, alcoholic liver disease and a variety of other disorders.  The circumstances surrounding his death have also been the subject of much debate and speculation.  There is no agreement as to whether Alexander died of disease or whether he was secretly murdered.  The only undisputed facts are that he died in early June of 323 B.C. at the palace of King Nebuchadnezzer II in Babylon after experiencing an illness for days.

In May of 323 B.C. Alexander arrived in Babylon, an important city in ancient Mesopotamia, near present-day Baghdad,  After 13 years of military campaigning and building an empire, he decided to take some time to rest and plan his next conquest.  While in Babylon, he attended a dinner party at the home of his friend, Medius of Larisa.  There was a great deal of drinking late into the night.  After complaining that he did not feel well, the warrior king fell asleep with a high fever.

Below is a brief excerpt from an account Alexander's "ten day" illness.  It was written by Arrian, a Greek historian, about 350 years after Alexander's death.  Arrian's account is based on the Royal Diaries, journals of Alexander's campaigns, written by contemporaries of the prominent military leader.


A few days later he (Alexander) had performed the divine sacrifices (those prescribed for good fortune and others suggested by the priests) and was drinking far into the night with some friends. He is said to have distributed sacrificial victims and wine to the army by detachments and companies. Some state that he wanted to leave the drinking-party and go to bed, but then Medius met him, the most trusty of his Companions, and asked him to a party, for he promised that it would be a good one.

Day 1
The Royal Diaries tell us that he drank and caroused with Medius. Later he rose, had a bath and slept. He then returned to have dinner with Medius and again drank far into the night. Leaving the drinking, he bathed, after which he had a little to eat and went to sleep there. The fever was already on him.

Another account of Alexander the Great's death, written by Greek historian Diodorus Siculus during the 1st century B.C., states that the Macedonian king was struck with pain after imbibing a large bowl of unmixed wine as a tribute to the Greek god Hercules.  According to Diodorus, Alexander "shrieked as if smitten by a violent blow." after drinking from the cup.


. . . and finally, filling a huge beaker, downed it at a gulp. Instantly He shrieked aloud as if smitten by a violent blow and was conducted by his Friends, who led him by the hand back to his apartments. His chamberlains put him to bed and attended him closely, but the pain increased and the physicians were summoned. No one was able to do anything helpful and Alexander continued in great discomfort and acute suffering. When he, at length, despaired of life, he took off his ring and handed it to Perdiccas. His Friends asked: “To whom do you leave the kingdom?” and he replied: “To the strongest.” He added, and these were his last words, that all of his leading Friends would stage a vast contest in honour of his funeral. This was how he died after a reign of twelve years and seven months. He accomplished greater deeds than any, not only of the kings who had lived before him but also of those who were to come later down to our time.

There are several accounts of Alexander the Great's death and some mention the theory that he met with foul play such as arsenic poisoning.

In 2014, Dr. Leo Schep, a toxicologist from New Zealand's National Poisons Centre, released the results of his research into Alexander's death.  Dr. Schep's research shows that Alexander may have been killed by toxic wine made from an innocuous-looking plant.  Schep contends that it was most likely Veratrum album, a poisonous plant from the lily family, also called white or false hellebore.  He contends that his theory would be compatible with Diodorus' account of Alexander's death.

Veratrum album was used by the ancient Greeks as part of an herbal treatment to induce vomiting. According to Dr. Schep, that would account for the long period it took for Alexander to die, the toxicologist  rules out arsenic as death would have occurred sooner.  Despite his findings, however, Schep does not claim to have completely solved the mystery of Alexander's death.  He is quoted in The Independent, a British online paper, as saying that, "We'll never know, really."  He admits that his theory and the actual cause of Alexander's death, can never be conclusively proven.

Alexander the Great died undefeated in battle.  After his sudden death, there was no immediate successor.  His empire, therefore, was divided among four of his generals (known as the "diadochi" (successors). This led to a series of civil wars and the empire eventually fell apart.

* Due to some descriptions of Alexander the Great in ancient documents,  there is reason to believe that he had a medical condition called heterochromia of the eye (eyes of different colour).  British scholar Peter Green surmised that Alexander had one blue eye and one brown eye.

* In 327 B.C., Alexander married Roxane, the daughter of a Persian nobleman. Roxane was from Bactria, a province of the Persian empire located in modern Afghanistan, Uzbekistan and Tajikistan. Alexander met her when he conquered Bactria between 329-327 B.C.  Roxane was pregnant at the time of Alexander's death  Their child, a son, became Alexander IV.

Here is how the Greek historian Plutarch describes the meeting and marriage of Alexander the Great and Roxane:

As for his marriage with Roxana, whose youthfulness and beauty had charmed him at a drinking entertainment, where he first happened to see her taking part in a dance, it was indeed a love affair, yet it seemed at the same time to be conducive to the object he had in hand. For it gratified the conquered people to see him choose a wife from among themselves


Below is a 1756 painting of Alexander and Roxane by Italian Baroque artist Pietro Rotari. 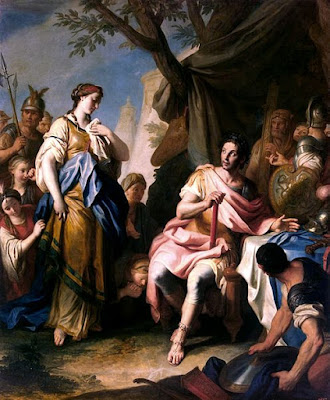 Alexander IV and his mother, Roxane, were killed circa 310 B.C. by Cassander, one of the four generals (diadochi) who had succeeded Alexander.  A peace treaty had been signed stipulating that young Alexander would be sole ruler of the empire when he came of age in 305 B.C.  However, Cassander became king of Macedon that year instead.