Dr. Ewan Cameron and the banality of evil 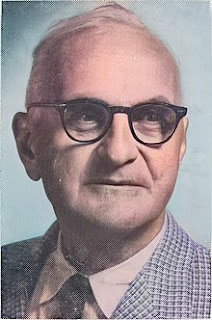 Look at the face in the photo above.  That could be your uncle or your next-door-neighbour, but it's the face of a man who performed Nazi-like experiments right here in Canada.  To be honest, I knew very little about Dr. Ewan Cameron until recently.  I vaguely remembered having heard about him many years ago.

Earlier this month, however, I was reminded of the infamous psychiatrist when I read Louise Penny's novel, The Madness of Crowds.  Cameron and his experiments figure prominently in the novel.

Donald Ewan Cameron was born in Bridge of Allan, Scotland on December 24, 1901, the eldest son of of a Presbyterian minister.  As the son of a clergyman, he was certainly not raised to treat human beings as guinea pigs.  Cameron is an example of the "banality of evil," a term coined by author and Holocaust survivor Hannah Arendt.  In her 1961 report for The New Yorker on Nazi operative Adolf Eichmann's war crimes trial, Arendt wrestled with the philosophical question of whether one can do evil without being evil.

Eichmann was responsible for organizing the transportations of millions of Jews and others to concentration camps in support of Hitler's Final Solution.  Yet, Arendt considered Eichmann to be a rather bland and ordinary bureaucrat, not an amoral monster.  She described him as being "neither perverted nor sadistic," but "terrifyingly normal."  He only wished to boost his career in the Nazi bureaucracy,  He claimed that he was just "following orders."

In her 1963 study of the case, Eichmann in Jerusalem: A Report o the Banality of Evil,  Arendt stated her belief that Eichmann performed evil deeds without evil intentions.  She found that he was detached from the reality of his evil actions.  She concluded that he was not able to "think from the standpoint of anybody else."  It seems the same can be said of Dr. Ewan Cameron.

Dr. Cameron attended the University of Glasgow, where he was a fine scholar and athlete.  He received a Degree in Medicine in 1924 and a Diploma of Psychological Medicine in 1925.  That same year, he begam his training in psychiatry at the Glasgow Royal Mental Hospital.

In 1926, Dr. Cameron left Scotland and immigrated to the United States, where he continued his training at the Phipps Clinic at John Hopkins Hospital in Baltimore under the auspices of Swiss-born U.S. psychiatrist Adolf Mayer.  After leaving Baltimore in 1928, Cameron moved to Switzerland to work at the world-renowned Burghölzlim, the psychiatric hospital of the University of Zurich.  There he became acquainted with the Dean of Manitoba's School of Medicine, Dr. A.T. Mathers, also the Chief Psychiatrist for the province,  Dr. Mathers persuaded him to come to Canada and become head of the Brandon Mental Hospital's Adamson's Unit, where he took charge of "admitting."

In 1933, Ewan Cameron married Jean C. Rankine, whom had met while they were students at the University of Glasgow.  Rankine had captained the Scottish the woman's field hockey team and she was a  skilled tennis player.

Dr. Cameron left Brandon in 1936.  He moved to Massachusetts, where he worked at Worcester State Hospital.  For the year ending November 30, 1937, Cameron is listed in the hospital's annual report as "Resident Director of Research, continues engaging in insulin coma research, and publishes a paper: Electrical brain waves in schizophrenics during insulin treatments."

By 1943, Dr. Cameron was a well-known psychiatrist.  He was invited to McGill University.in Montreal by celebrated Canadian neurosurgeon Dr. Wilder Penfield.  Penfield asked Cameron to be the first director of the new Allan Memorial Institute, a psychiatric teaching hospital, located on the slope of Mount Royal, on the McGill University downtown campus.  It was named in honour of Sir Hugh Allan, a Scottish-Canadian shipping magnate and financier, whose former mansion was situated on the site.

According to The Canadian Encyclopedia, psychiatric experiments were conducted at the Allan Institute between 1957 and 1964 (possibly as early as 1948).  It was Dr. Cameron who orchestrated these experiments. which were partially funded by the United States Central Intelligence Agency (CIA), as part of their top-secret MKULTRA program through a front organization named "The Society for the Investigation of Hunan Ecology."

The CIA wasn't the only organization providing funding Dr. Cameron's experiments.  Tragically, the Canadian government was also complicit in his atrocities.  From 1950 to about 1965, Cameron is also believed to have received a million dollars in funding from the federal government.

The Cameron lab would have proceeded with its experiments with or without the CIA's financial support, according to Alfred W. McCoy, an American historian and educator, who stated that "Ewen Cameron did not need the CIA to corrupt him.  He clearly had his mind set on doing unorthodox research long before the the Agency front started to front him.  In Cameron, the CIA had a psychiatrist, conveniently outside the United States, who was willing to do terminal experiments in electroshock, sensory deprivation and then trying to program in new behavior.  Cameron carried the process known as "brainwashing" to its logical extreme."

Cameron's purpose was to de-pattern the brain into practically an infantile state, before rep-patterning it to learn the proper reposes to situations.  In this infantile state, Cameron's patients lost their capacity to speak, walk or control their bowels.  The ended up in a vegetive state.

Cameron left the Allan Memorial Institute abruptly in 1964 for a position at the Albany Medical School in New York State.  According to Rebecca Lemov, a professor of the History of Science at Harvard University, Cameron's lab associates remained after his departure and continued his brainwashing techniques well into 1965, despite orders to stop.

When the MKULTRA program ended in 1973, former CIA director Richard Helms ordered that files related to the Montreal experiments be destroyed.  However, in 1977 it was revealed that not all the files were demolished.  Over a decade after Cameron's death, the CIA'S connection to  the Society for the Investigation of Human Ecology was finally confirmed,  In an August 1, 1977 New York Times interview, Leonard Rubenstein, Cameron's former lab assistant, stated that the work Cameron performed with CIA funds was "directly related to brain-washing,"  He explained that they "had investigated brainwashing among soldiers who had been in Korea" and that "we in Montreal started to use some of these techniques, brainwashing patients instead of using drugs."  According to Rubenstein, Cameron and his colleagues were not aware of the CIA involvement in their funding.

As is pointed out in Louise Penny's book, this was the time of the Cold War, the Red Scare and the 1962 Cuban Missile Crisis.  The CIA was trying to further its knowledge of brainwashing, particularly since some American soldiers captured during the Korean War had returned with praise for communism and condemnation for the United States. Some members of the U.S. Congress feared that the American POWs had been transformed from patriots to sleeper agents.

A Dutch psychologist wrote in the New York Times Magazine, "The totalitarians have misused the knowledge of how the mind works for their own purposes.  They have applied the Pavlovian technique - in a far more complex and subtle way of course - to produce the reflex of mental and political submission of the humans in their power."  Enter Dr, Ewan Cameron.  Under his stewardship, patients at the Allan Memorial Institute were subjected to electroshocks, drug-induced sleep and large doses of LSD.

Dr. Ewan Cameron went on to become the president of the World Psychiatric Association from 1961 to 1966,  He died on September 8, 1967 at the age of 65, in Lake Placid, New York.  He passed away after suffering a heart attack while hiking in the Adirondack Mountains with his son.  At the time of his death, obituaries provided details of the eminent psychiatrist's career, and the British Medical Journal expressed awe at his accomplishments.

How did it happen that Ewan Cameron, at the time of his death, was held in such high esteem by his colleagues in the psychiatric profession?  How did it happen that his egregious experiments were not condemned during his lifetime?  According to historian Alfred McCoy, "the dehumanizing nature" of Cameron's methods "were published without complaints from other psychiatrists."  McCoy pointed out that "Cameron read papers about "depatterning" with electroshock before meetings of his fellow psychiatrists; and they rewarded him, electing him president of the American. Canadian and World Psychiatric Associations."

It is now known that Dr. Cameron's brainwashing experiments caused considerable pain and ruined lives.  Some of his victims have come forward, in particular women he supposedly treated for post-partum depression. The truth is that the supposedly good doctor engaged in torture in the name of science.  By all accounts, Cameron had a brilliant mind - too brilliant.  He was a prolific researcher and tried to gain insights into such afflictions as epilepsy and schizophrenia.  Somewhere he got lost along the way.  His legacy remains an ugly blight on Canadian history and Canada's reputation.

* In 1945, Dr. Ewan Cameron gained world-wide prominence when he was invited to become a member of the team of psychiatrists who examined Rudolf Hess at  the Nazi war crime trials in Nuremburg, Germany.  Hess was diagnosed as having amnesia and hysteria.  He later admitted that he had faked the amnesia.

* The directors of the Allan Institute defended Dr. Cameron in the late 1980s.  They contended that psychiatrist were not expected to inform patients of the treatment they were receiving in the 1950s and 1960s.  They further contended that there was no proof that Cameron had any knowledge of the CIA's funding of his experiments.

* Dr. Cameron maintained American citizenship from 1942 until his death in 1967.

* Nine survivors of  Cameron's experiments were awarded compensation from the United States government in 1988.

* In 2019, two legal actions were taken by relatives of people subjected to Dr. Cameron's "depatterning" at the Allan Memorial Institute.  The first, filed on January 24, 2019 in Quebec Superior Court, was an application for class action by Julie Tanny.  The second, dated February 13th, is a $1 million per family lawsuit launched by Marilyn Rappaport and Alison Steel.  The two actions alleged that Cameron's experimental procedures were done without informed consent and that they left patients with permanent psychological damage and had long term negative effects on their families.

* A 1998 Canadian television movie, entitled Sleep Room, details Cameron's experiments at the Allan Memorial Institute.  It was originally broadcast as a miniseries and is based on the book In the Sleep Room: The Story of CIA Brainwashing Experiments in Canada.by Anne Collins.